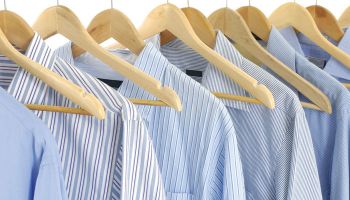 First impressions are everything, and clothing plays a major role in setting the best example. With this in mind, most banks will institute either a dress code or a clothing program.

“Banking is one of our largest industries that we service today,” says Jim Kennedy, senior director of marketing at Lands’ End Business Outfitters, a supplier of logoed business apparel. “We hear a lot that trust and security are very important, and the employees’ apparel can really help deliver on some of that.”

Maria Fusca Gendelman, senior vice-president, chief retail/experience officer, at $929.3 million-assets ConnectOne Bank in Englewood Cliffs, N.J., agrees. Her bank has a professional-dress policy and a business-casual Friday. “We want to make sure the perception of the bank is aligned with what our vision is,” she says.

While banks have traditionally been more conservative in dress requirements, a casual trend has emerged in recent years—beyond casual Fridays. “Sometimes it’s about approachability—they’re dressing as maybe their clients do,” says Kennedy.

Sound Community Bank, a $381.8 million-assets institution in Seattle, Wash., is aware of the trend. The bank’s dress code is professional attire, with the option to dress down—in jeans—twice a week. “When clients and customers come into our offices, we want them to be confident in the people who are serving them, and we think part of that confidence is related to how those people look,” says President and CEO Laurie Stewart. “But we also want to be sensitive to the fact that business casual is pretty popular in our market, and that it doesn’t take a suit and tie to be a professional.”

The bank also pays attention to the culture of its branch locations. “We try and be reflective of the communities we serve,” says Stewart.

With a multitude of considerations, a dress code can be difficult to enforce, so some banks choose easier-to-manage uniforms, or career apparel. Such clothes usually include logos and company names, which can offer a form of identification and branding that can spread into the community. “Your employees are wearing this product not only to work, but before and after work,” says Kennedy. “It tends to be a walking billboard in the community.”

ConnectOne Bank requires its couriers to wear logoed apparel. The bank pays for everything but the khakis, and provides each courier with shoes, two polos, two button-downs, and a winter/spring jacket. “We want to make sure that our people are dressed with our attire,” says Gendelman. “One, for branding purposes, and two, for visibility.”

Sound Community Bank offers all its employees apparel featuring the bank’s orca whale mascot and logo, which they can wear on dress-down days. The only requirement is that each department wears the same color shirt on a given day. The bank provides an allowance toward the clothing, and beyond that, employees have the opportunity to spend “Orca Bucks” on the apparel, which are an incentive earned for outstanding customer service.

A lot goes into creating a dress policy, but Kennedy recommends that banks focus on their brand, the functionality of the apparel, and above all else, their employees: “If they like what they’re wearing, they’ll be a lot happier.”