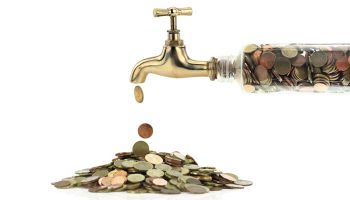 Reserve releases have provided a boost to banks’ earnings for more than three years, with plenty of banks using existing reserves to absorb credit losses rather than matching charge-offs one-for-one.

Some banks have released reserves beyond underproviding for loan losses. SNL found those releases by looking at cases where not only a bank’s provision lagged its net charge-offs but the decline in reserves exceeded that underprovisioning, as well as instances where the amount of the reserve release did not match the difference between provisioning and charge-offs. 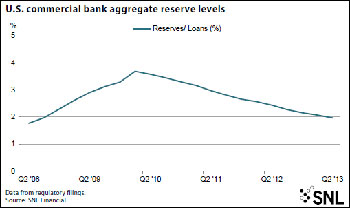 Analysts and investors have long expected reserve releases to provide less of a boost to earnings, and credit leverage, as the Street often refers to it, did wane in the second quarter. In the first quarter of 2013, net reserve releases totaled $2.85 billion. BofA and Citi also helped drive the releases, accounting for $2.0 billion of the first-quarter releases.

An exception to the size tendency

The nation’s largest banks have accounted for the bulk of reserve releases over the last few years. However, a smaller institution, Puerto Rico’s Popular Inc., accounted for a substantial portion of the releases in the second quarter as well. Popular saw its reserves drop dramatically after it took significant actions to improve its credit quality by selling 42% of its nonperforming loans in the period.

Several of the top 20 banks, including BofA and Wells Fargo & Co., see reserve releases continuing in the future. BofA CFO Bruce Thompson said on the company’s second-quarter earnings call that due to its strong allowance for loan losses and improvement in credit quality, it expects continued reserve releases, particularly in its consumer real estate portfolios.

Wells Fargo CFO Timothy Sloan said on his company’s second-quarter call that the company released $500 million in the second quarter, compared to $200 million in the first quarter and $400 million a year earlier. He said the company expects future reserve release as long as there is not a significant deterioration in the economy.

“And while we don’t know what our release will be in the third quarter, the favorable conditions that drove this release this quarter have not dissipated,” he said on the call, according to the transcript. 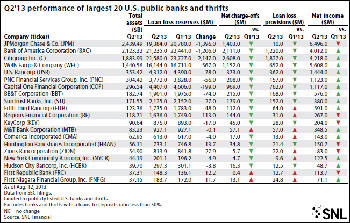 For a larger version of the table, click on the image.

The top 20 banks alone have experienced declines of $94.58 billion in their reserves since the peak. That group of institutions saw their reserves decline by approximately $5.95 billion in the second quarter. Those banks’ provisions for loan losses fell $4.11 billion short of their reported level of net charge-offs in the period.

The more than three years of reserve releases across the banking industry followed a period of substantial increases in reserves that kicked off not long after the credit crisis began to rear its head.

Banks ran down their reserves in the years leading up to the downturn and had to play catch up early in the crisis. The banking industry’s reserve level reached its most recent low point at the end of the fourth quarter of 2007, when reserves totaled $89.17 billion, or 1.35% of loans. Commercial banks increased reserves steadily from that point forward, building them through heightened provisioning to a peak of $248.20 billion, or 3.69% of loans, at the end of the first quarter of 2010.

The heightened level of provisioning served as a real drag on bank earnings. Banks’ provisions for loan losses peaked at $63.19 billion at the end of the second quarter of 2009, when banks reported an aggregate net loss of $11.84 billion. At that time, banks’ provisions equaled more than 50% of their revenue bases. That ratio held fairly stable, hovering above or slightly below 40% over the next four quarters, through 2009.

Banks’ provisioning levels began to decline substantially after that, decreasing approximately 21% in both the first quarter and second quarters of 2010.

Continued decreases in provisioning followed, and banks began to release their reserves as well, offering a real boost to their bottom lines. Banks capitalized on the credit leverage, decreasing the aggregate amount of their reserves 10 straight quarters through the third quarter of 2012. The decreases in the banking industry’s reserve levels were relatively consistent, falling between 3% and 6% a quarter during that period. Banks’ reserves-to-loans declined during that period as well, dropping to 2.28% at the end of the third quarter of 2012 from 3.69% at the end of the first quarter of 2010.

Most of the Street expected that decline to continue in the fourth quarter of 2012, albeit at a much slower pace. Reserves declined in the fourth quarter of 2012, falling to 2.16% of loans, but the decrease in reserves was somewhat surprisingly even greater in the first quarter of this year, when commercial banks’ reserve fell to 2.08% of loans, while provisions for loan losses fell 29.3% from the linked quarter after holding fairly steady during the prior three quarters.

Banks reserves declined again in the second quarter, decreasing to 1.97% of loans, while provisions for loan losses fell 21.9% from the first quarter. With the decrease in the second quarter, banks’ reserve-to-loan ratio stands at the lowest level witnessed since the third quarter of 2008 when the ratio also was 1.97%. 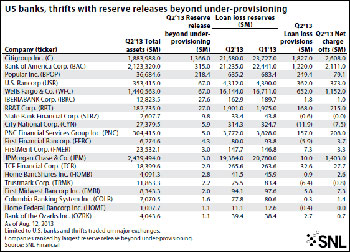 For a larger version of the table, click on the image. 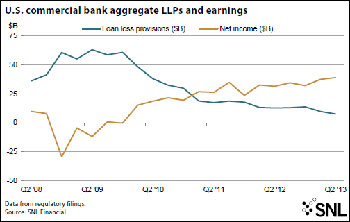 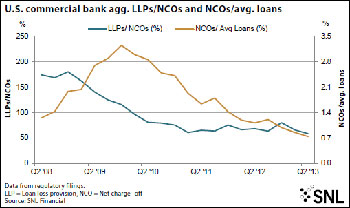 This article originally appeared on SNL Financial's website in slightly different form and appears on www.bankingexchange.com as part of a cooperative venture. Each week a selected SNL article will be brought to our readers. Follow us on [email protected] to learn when it has been posted. We welcome your feedback on this weekly feature. Email to Steve Cocheo, digital content manager