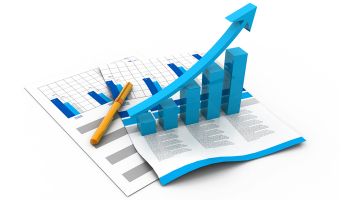 Insurance brokerage income consists of commissions and fees earned by a BHC or its subsidiary from insurance product sales and referrals of credit, life, health, property, casualty, and title insurance. It does not include income derived from the sale of annuities or non-insurance products like debt cancellation or debt suspension agreements.

B of A subsidiary FIA Card Services lost more than three-quarters of a billion dollars in insurance brokerage income, and net insurance brokerage losses tallied $637.5 million in 2012. The cause of this decline, which first occurred in 2010, was due to inappropriate sales of payment protection insurance (PPI) policies through its international card services business in the United Kingdom. The U.K. Financial Services Authority (FSA) established new standards for PPI sales and required companies to "remediate" customers for systematic breaches of the standards before, as well as after, they were set. B of A's PPI reserve was $510 million on December 31, 2012, and its recorded PPI expense last year was $692 million.  From January 2011 through January 2013, total industry refunds and consumer compensation had reached $13.55 billion, according to the FSA.

BHCs with assets greater than $10 billion experienced a 24.0% decrease in insurance brokerage fee income from $6.96 billion in 2011 to $5.29 billion in 2012.  Despite declines at several of the largest BHCs, the rest of the industry performed well overall.

Insurance brokerage fee income produced by BHCs between $500 million and $1 billion in assets increased 65.9% from $133.7 million in 2011 to $221.9 million in 2012, largely due to new reporting by one thrift holding company.  Without that one company, this class of financial institutions grew its insurance revenue by 8.1%.

In 2012, as in every year, insurance brokerage attained the highest rate of participation by BHCs, outdistancing the number of BHCs engaged in annuity, fiduciary, or securities brokerage activities. [GRAPHIC-1] Three in five (63.2%) large BHCs reported participating in insurance sales activities. Through 2005, the year after the onset of the seemingly unending soft property-casualty market, bank insurance brokerage income had been growing at phenomenal rates. (The soft market is one where premiums decline as insurance underwriters compete to gain or preserve market share.) Of course, much of the early growth was due to continued acquisition activity, which peaked in 2003, subsided, bumped up in 2006, subsided again, and in 2012 began to bubble up again. Since December 2011, market premiums began rising consistently, although no one yet wishes to declare the new environment a hard market.

Despite the longstanding soft market in commercial property-casualty insurance in the period 2004-2011, BHCs achieved record insurance brokerage income in 2011. Still, the bank insurance industry has been up against it, as they say, over the last few years, as:

(1) The industry's numbers suffered from these occasional major decreases in insurance brokerage revenue at a huge banking organization, such as occurred at Bank of America in 2010 and 2012.

(2) There were more frequent instances of decreases in contingent commissions.

What the future holds

Considering the removal of these fairly significant chunks of insurance-related income from the industry total, the bank industry's revenue from insurance brokerage actually looks even better than it is. We can see that the sales of some large bank insurance units to nonbanks do not represent a trend. So far, the sales of bank-owned agencies have largely been conducted either because a bank needed capital or insurance was unable to become a relevant or meaningful proportion of income.  Truth be told, in the last few years, many more banks and thrifts acquired agencies than sold them.  Since 2007, dozens of banks have acquired agencies; in fact, quite a number have purchased multiple agencies. [GRAPHIC-3] 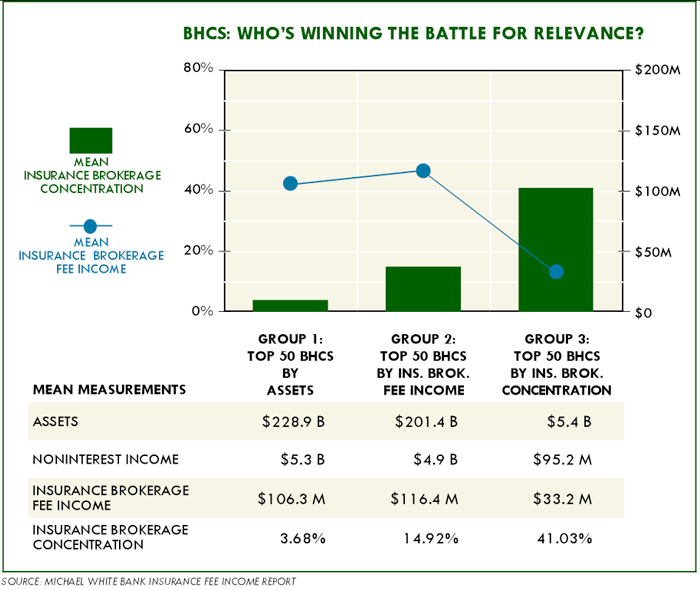 So, who’s winning the battle for relevance or significance in bank insurance brokerage?  That’s an important thing to keep in mind, and this illustration serves as a powerful reminder. An important measure of relevance or significance is the Insurance Program Concentration Ratio, which is the percentage of total noninterest income attributable to insurance fee income. This ratio enables us to know how concentrated or meaningful bank insurance programs are among their BHCs’ nonlending activities. [GRAPHIC-4]

In 2012, the top 50 BHCs by Assets (Group 1) averaged $228.9 billion in assets and $106.3 million in insurance brokerage fee income.  Their mean Insurance Program Concentration Ratio, that is, the percentage of noninterest income derived from insurance brokerage, was 3.68%.

With an average asset size of $201.4 billion in assets, the top 50 BHCs by Insurance Brokerage Fee Income (Group 2) averaged $116.4 million in insurance brokerage income.  They generated an average Insurance Program Concentration Ratio of 14.92%.

This exercise demonstrates that Assets and Insurance Program Concentration are inversely correlated. The largest banks may have generated a greater volume of insurance brokerage income, but its relevance or significance to them was the lowest among the three groups because the largest banks’ ratio of insurance brokerage income to noninterest income was the lowest. Part of the reason for this is that large BHCs have more resources to engage more sources of noninterest income.

There are, of course, individual exceptions among the large banking organizations; a couple that come to mind are BancorpSouth Inc. (MS) and BB&T Corporation (NC), where Program Concentration Ratios are regularly more than 30%. BancorpSouth and BB&T have more resources to undertake other revenue-making activities, but that does not prevent them from recognizing the opportunities of insurance distribution and taking advantage of them.

And, yet, relevance is relative. While Program Concentration can be greater as a quantitative measurement among smaller institutions, smaller measures of Concentration can still be relevant to larger institutions that obtain noninterest fee income from more numerous sources. Few would dispute the relevance or significance of $1.56 billion in insurance brokerage fee income at Wells Fargo, even though its “relevance reading” is 3.67%.

Unfortunately, too many banking organizations have not gotten serious about insurance brokerage. Community banks with high Tier 1 and total risk-based capital ratios continue to earn sub-par returns and ignore the opportunities in other financial services like insurance and investment programs. Too many banks and BHCs have not gotten serious about insurance brokerage income and have not devoted meaningful attention, capital, marketing and sales efforts to develop it. This is true of many institutions already reporting small sums of insurance brokerage revenue. And, that's not to mention more than half the banks and better than one-third of the large BHCs that are not engaged at all in the activity.

Insurance brokerage is one of the least risky, steady, profitable, publicly needed financial services there is. The return on investment can be good, with the application of sound criteria in selecting acquisition targets. And, in many cases, the returns from an insurance agency will exceed the ROE of a bank.

We hold onto the hope that more banking organizations will recognize their customers’ widespread insurance needs, society’s prevalent use of insurance products for protection against harm, and the positive impact that insurance fee income can have on the financials and the future of their institutions.

1 In 2006, the Federal Reserve redefined top-tier “large” BHCs as those with more than $500 million in consolidated assets.  With few exceptions, only those BHCs defined as “large” report detailed revenue line items like insurance brokerage income. Hence, this report uses the smallest community banks, i.e., those with assets under $500 million, and their insurance brokerage fee income as a “proxies” for the smallest BHCs.

Michael White, Ph.D., CLU, ChFC is president of Michael White Associates, a bank insurance consulting firm headquartered in Radnor, PA, and at www.BankInsurance.com. He may be reached at 610-254-0440 or [email protected]