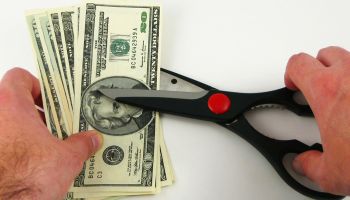 JPMorgan Chase & Co.'s $13 billion settlement with U.S. and state regulators from Nov. 19 brings the total credit crisis and mortgage-related settlement costs to more than $85 billion for the six largest bank holding companies by assets, according to data compiled by SNL Financial.

In a recent interview with Reuters, U.S. Attorney General Eric Holder said the four components of the JPMorgan settlement would serve as a template for the Department of Justice in seeking future mortgage fraud resolutions. The settlement included a fine, acknowledgement from the company of the problems with the securities issued, consumer relief, and the exclusion of any open criminal investigations.

November was a newsworthy month for JPMorgan's efforts to resolve legacy mortgage issues. On Nov. 15, the bank reached an agreement for $4.5 billion with 21 institutional investors to settle representation-and-warranty claims as well as servicing claims on RMBS trusts sponsored by JPMorgan, Chase, and Bear Stearns between 2005 and 2008.

• Download a large table of large banks and their settlements here

When considering the costs of the credit crisis and mortgage-related settlements, analysts also examine the amounts of loans previously sold that have been repurchased, or "putbacks" in addition to the settlements with regulators and investors. The largest six banks by assets as of the third quarter of 2013 have repurchased or indemnified since the beginning of 2008 a total of $98.9 billion of closed-end loans previously sold, according to bank holding company regulatory filings. (This figure does not include any amounts repurchased by Goldman Sachs Group Inc. and Morgan Stanley in 2008 as the firms did not report bank holding company regulatory financials for 2008.)

More recently, however, the largest banks have repurchased $14.5 billion closed-end, one-to-four-family loans in the first nine months of 2013, according to regulatory filings. With $11.10 billion repurchased so far in 2013, Bank of America Corp. accounts for the bulk of these repurchases, followed by Wells Fargo & Co. and JPMorgan with $1.35 billion and $1.14 billion, respectively. To cover future putback claims on mortgages the institutions have either sold or securitized, the banks have built a combined reserve for representation and warranty reserves for one-to-four-family mortgages of $18.3 billion as of the third quarter. This is down 6.93% sequentially from $19.6 billion. 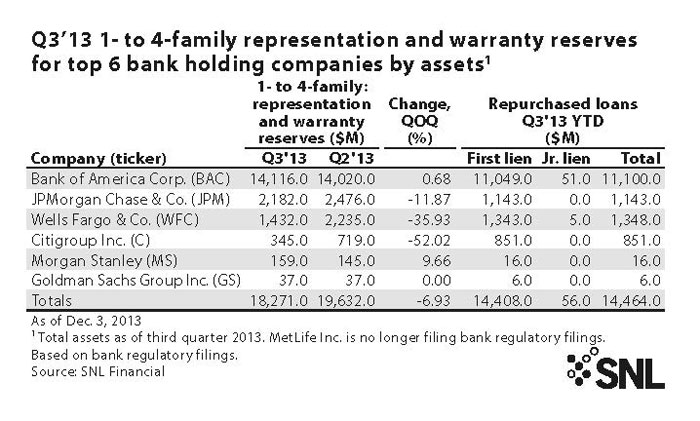