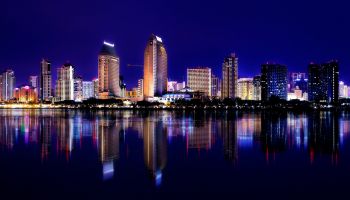 Housing prices have enjoyed substantial, double-digit growth over the past year, leading to affordability issues in some major metro markets that could cap prospects for future growth.

From a renter's perspective, San Diego might be even less affordable than San Francisco, which famously boasts the nation's most expensive real estate.

Getting into homes takes help

Prices in San Diego shot up 19.4% year over year in January, according to the latest data available from the S&P/Case-Shiller home price indexes. With prices so high, real estate agents said first-time homebuyers need to adjust their expectations.

Young renters can only make the leap to homeownership in San Diego with help from a government down-payment assistance program or their families, said Leslie Kilpatrick, president of the Greater San Diego Association of Realtors.

"I think we're seeing more and more of that," Kilpatrick told SNL. "This generation of parents is realizing the difficulties their children are facing in buying a home."

A recent study by HSH, a provider of mortgage interest rate data, details how much income a household needs to afford the typical home in a given market. HSH calculated the minimum income needed to purchase a median-priced home in a given market. The study assumed a 28% front-end debt-to-income ratio and a 20% down payment and only covered principal and interest.

The results of this study raise an interesting question: How many renters in each market could afford to buy the typical home?

Can San Diego renters swing it?

While it may not be possible to come up with a definitive answer, SNL explored the question using the HSH study, recently released U.S. Census Bureau data detailing renter incomes, and corresponding Census data on housing units. By one measure, San Diego had the lowest ratio of income-eligible renters—meaning they earned enough to buy a median-priced home—to housing units among 25 major metropolitan areas. 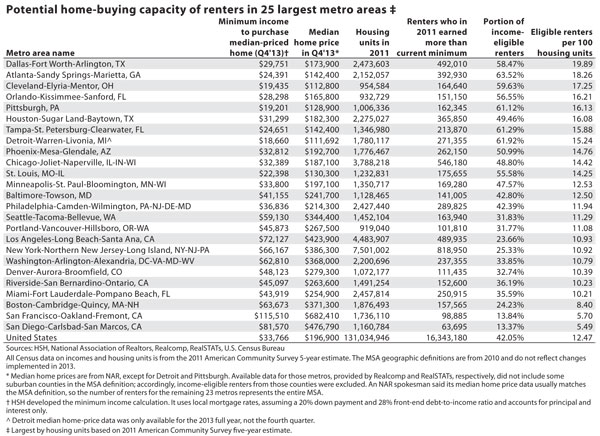 To arrive at this conclusion, SNL pulled income data for renters from a special tabulation of Census data hosted by HUDuser, which reports detailed income brackets in various metro areas from the 2011 American Community Survey five-year estimate. These special tabulations were released in February. To determine the number of potentially income-eligible renters, SNL added up the renters in all income brackets above the necessary minimum income level for each metro area, excluding the bracket that contained the minimum income as determined by HSH. SNL also pulled total housing unit figures for various metro areas from the 2011 data set to line up with the income data.

The HSH analysis, which uses 2013 fourth-quarter median home prices provided by the National Association of Realtors, shows buyers in San Diego need to earn $81,570 to purchase a median-priced home. SNL found that, at least in 2011, about 64,000 renters in San Diego earned $100,000 or more (the next-highest bracket above $81,570 that the Census breaks out includes incomes between $100,000 and $125,000). There were about 1.2 million housing units in the metro area at that time. This works out to about 5.5 eligible renters per 100 housing units.

While this is imprecise, the HSH study did not cover taxes or insurance, so excluding the bracket that contained the minimum income allows necessary wiggle room and allows for a more conservative look at potential affordability.

This look at renters' potential home-buying eligibility has its limitations. For one thing, there is a gap in time between the income and housing units data, from 2011, and the median home price data, from 2013. This sort of gap is not unprecedented, however. The National Association of Realtors similarly uses median income when calculating its affordability index, though the time gap is slightly less since overall median income figures have been updated as of year-end 2012. And the HUDuser site, the source of the 2011 income data, notes that this data is used to determine the allocations in rental assistance programs such as Section 8.

Looked at in this way, San Francisco might have more expensive homes, but it also had more renters who in 2011 earned enough to afford a typically priced home in the 2013 fourth quarter, at almost 99,000 households, or 5.7 renters per 100 housing units.

Broader implications of the methodology

Unsurprisingly, housing is most affordable by this measure in Texas, which boasts one of the strongest economies in the country, plenty of land and accommodating zoning policies. As such, the state did not experience much of a real estate bubble or crash, enjoying modest single-digit increases through recent years.

The Dallas market requires a minimum income of $29,751 to buy a median-priced home, according to HSH. The data pulled from HUDuser shows that roughly 492,000 renters in the metro earned more than that amount.

Detroit is well-known for having some of the nation's cheapest real estate, but its economy and demographics are also suffering. The minimum income required to purchase in the Motor City was just $18,660, and more than 60% of its renters made more than that in 2011. But the city's shrinking population and large stock of housing units push down Detroit's ratio of renters to units. Still, with roughly 15 potentially income-eligible renters per 100 housing units, the metro was one of the top 10 most affordable and had a higher ratio than the national average.

In the analysis for Detroit and Pittsburgh, SNL relied on median home price data from local real estate companies because the National Association of Realtors does not provide data for those metros. The locally provided data excluded some suburban counties, which SNL likewise stripped from the renter income data. For Detroit, median home price data was only available for the full year, as opposed to the 2013 fourth quarter.

Dallas, Detroit, and San Diego might be drastically different markets, but Realtor associations in all three leveled the same primary gripe: a lack of inventory.

"There's plenty of interest, but the problem is there is a lack of inventory. People want to buy, but there is nothing for them to buy," Embry Webb, president of the Detroit Association of Realtors, told SNL.

In Dallas, Bill Head, director of communications for the MetroTex Association of Realtors, said there are 19,268 active listings, compared to 42,952 in 2007 before the crash.

"It amazes me, because if you look at where the pricing structure is, it would certainly seem to be an ideal time to sell," Head told SNL.

While the Dallas market remains affordable for the typical household based on the median price, Head said prices continue to ride higher, in contrast to San Diego and Detroit, where Realtors report a moderation in price increases.

"Several homes in my neighborhood went on sale at a price that (a) I couldn't imagine the home selling for and (b) I just didn't see any way that that property could appraise for that price. And literally within a matter of two weeks, those homes were off the market," Head said.

Prices have shot up in Detroit as well, escalating 15.6% year over year in January, according to Case-Shiller. However, Webb said absolute levels remain low and affordable for most first-time buyers.

Back to West Coast

In San Diego, real estate agents think the market might be stabilizing, but prices are so high that first-time buyers are struggling to find entry. But that does not necessarily mean the market is in a bubble again.

Rich Toscano, a financial adviser with Pacific Capital Associates in San Diego, launched a blog in 2004 presciently predicting a housing crash based on overvaluation. He maintains a graph that compares home prices to a blended value of rent and per capita income. The index is now at the peaks seen in 1979 and 1990, but it is still well-below the most recent bubble.

"People say to me, 'Are you worried about it?' And I think, 'It's expensive, but it's always been that way,'" Toscano told SNL. At the same time, he does not think there is much more room for prices to sustainably rise.

"I wouldn't say there couldn't be more upside, but what I would say is that whatever upside there is, I would expect to be given back eventually, at least in relative terms," he said.

Real estate agents in the San Diego metro area seem to agree with Toscano that prices are starting to stabilize and that the days of double-digit annual growth have likely passed. Still, for buyers interested in the lower end of the market where homes are more affordable, bidding wars remain fairly common.

"Most people miss a few before they understand that when they see something they like, they have to act boldly and put in a strong offer," said Kilpatrick, president of the local association.

Jim Klinge, a real estate broker in the metro area, similarly told SNL via email that the most recent low-end buyers he represented lost several bidding wars before nabbing a home. On Klinge's blog, which gained national fame during the housing crisis for its candor and brash style, the agent reports hyper-local statistics on supply and demand. For now, the fundamentals suggest San Diego's housing market is strong.

"What really matters is wondering if/when we will run out of rich people," Klinge wrote.