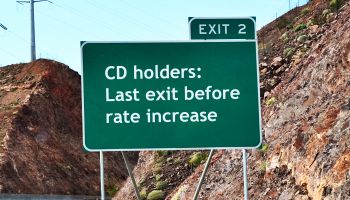 Banks' deposit bases have grown considerably over the last few years, but bankers recognize that many of those deposits could leave their balance sheets, or at least come at a higher cost, when interest rates rise.

Through the end of the first quarter, banks had grown their deposit base by 23% from four years earlier, while the cost of their deposits fell to just 51 basis points, reaching a 10-year low. 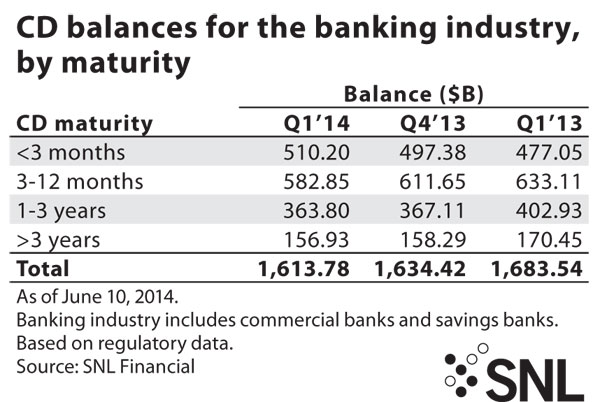 Those levels are unlikely to hold when the interest rate environment eventually turns, and there is growing recognition that an increase in long-term rates and not just a hike in short-term rates could cause material shifts in banks' deposit bases.

JPMorgan Chase & Co. certainly holds that belief, making waves when its CFO Marianne Lake said at an investor conference last week that the end of quantitative easing could lead to substantial deposit outflows. Lake said that the Federal Reserve's asset purchases had grossly inflated liquidity in the banking system, and the end of QE could cause deposit outflows of up to $100 billion at JPMorgan in possibly just a quarter or two.

Lake said that would likely begin in the second half of 2015 — a little more than a year away. JPMorgan's $100 billion in projected deposit outflows equated to roughly 7.8% of its deposit base at the end of the first quarter. Assuming the same level of deposit runoff across the banking industry, SNL found that the banking industry would experience deposit runoff of approximately $880 billion. 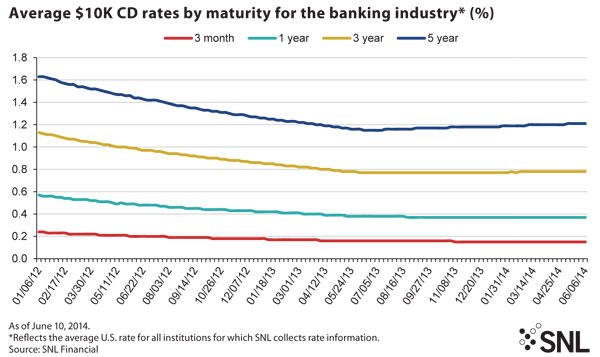 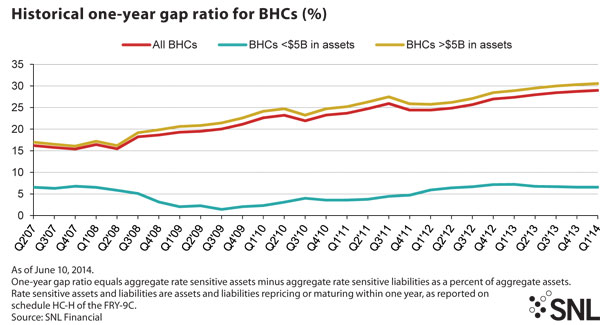 SNL also found that a sizable portion of CDs at banks would mature in the next year, particularly at smaller institutions. At the end of the first quarter, banks under $5 billion in assets disclosed that CDs maturing in three to 12 months equated to more than 12% of their liabilities, while CDs maturing in one to three years equated to more than 7.5% of their liabilities. If rates were higher when some of those CDs mature, banks might have to offer depositors higher rates to hold onto those funds.

Some institutions are preparing for such a change in the deposit business. CenterState Banks Inc. believes that a number of deposits that currently seem like they are core actually might not be that sticky when interest rates rise.

"I think probably what ends up happening is everyone is showing this great core deposit number right now and clearly that's not the case," Stephen Young, CenterState Senior vice-president and treasurer recently said in a conversation with SNL.

This could prove particularly true in a state like Florida, which has a high number of retirees who often shop for accounts with high rates.

Ernest Pinner, chairman, president, and CEO of Davenport, Fla.-based CenterState, acknowledged this much and noted that many holders of money market accounts and CDs could just gravitate toward banks offering the best rate in the market.

"In Florida, there's lots of money that is just a transaction. Someone has a CD with you or a money market with you and that's all they have. For 10 basis points, they'll go down the street," Pinner said.

Some banks have taken the opportunity to build core deposits now when rates are low. First Bancshares Inc. and First Financial Holdings Inc. both recently said at an investor conference in May that they worked to improve the funding side of the business while costs remain low.

Other bankers believe they can easily turn the deposit spigot on if they ever need to build their deposit base. Bank of the Ozarks Inc. Chairman and CEO George Gleason II noted at the same investor conference that his company has "latent" deposit growth capacity. He said the company could generate close to $3 billion in deposits without doing any acquisitions just through its existing branch network.

Many banks have also said they have taken actions to prepare for rising rates. The historical one-year gap ratio for bank holding companies shows that the industry as a whole would benefit from higher rates. However, the gap ratio analysis assumes a parallel shift in the yield curve and a number of market watchers question if all rates will change by the same amount, at the same time.

Some bankers even argue that many institutions have been unwilling to give up earnings today to prepare for the future, and ultimately the rate environment will change and show who was ready for rising rates and who was not.

"I know a lot of companies that have moved to liability sensitive to meet current earnings and there will be a day of reckoning that will be crushing. It's going to create M&A opportunities. That's what it's going to do," said Michael Daly, Berkshire Hills Bancorp Inc. chairman, president, and CEO said at a conference in late May.