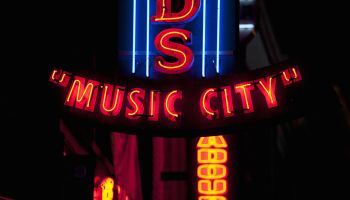 There may be no higher praise that can be heaped on a market today than to say it is comparable to some of the areas in booming Texas. But Andrew Gibbs, leader of Mercer Capital's financial institutions group, said the growth being seen in Nashville makes it an apt comparison.

"Maybe it's not that robust, but it's close to being in that league," he told SNL.

Nashville is a bustling, dynamic market that boasts a diverse economy, G. Kent Cleaver, president and COO of Avenue Financial Holdings Inc.'s Nashville, Tenn.-based Avenue Bank, told SNL. He cited the music, health care, and tourism industries as just a few of the drivers to the Music City's economy.

The tourism industry in particular is big and still growing, Cleaver said. In May 2013, the city saw the opening of the Music City Center—a new convention center that boasts 1.2 million square feet of meeting and exhibition space and that will help the city attract more national conventions.

"Nashville can now compete with the space and with the number of hotel rooms in this market," said Cleaver. "And that tells you a lot about what's happening in this economy now."

And the growth in tourism has led to a need for hotel rooms, which has helped spur commercial real estate lending in the region. Even with the large number of hotels now being built the city is estimated to have a shortage of about 3,000 rooms in the downtown area, Cleaver said. That factor alone will help drive CRE lending for the next two to four years, he said.

Additionally, some parts of the market are experiencing a shortage of Class A office space. Cleaver said there is virtually a 100% occupancy rate of office space of any significant size in the desirable areas of town. He said Avenue typically does not participate in larger transactions but has a sweet spot for projects of less than $10 million.

"We'll occasionally lead one that's larger, but we'll need a participant for that," Cleaver said.

Banks headquartered in the Nashville MSA saw aggregate growth in CRE of 11.19% on a year-over-year basis and 3.80% from the fourth quarter of 2013 to the first quarter of 2014, according to SNL data. 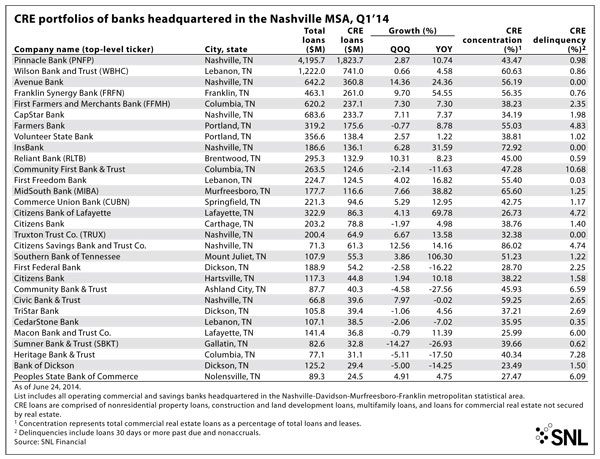 As of June 24, Avenue Bank had $360.8 million in CRE loans, which equated to 56.19% of its total loans, according to SNL data. Cleaver said that excluding owner-occupied properties that number is closer to 41%, and Avenue is comfortable with that concentration. The bank's C&I portfolio comprises about 30% of total loans, he said. Avenue's loan portfolio is healthy with no signs of weakness in any sector, according to Cleaver.

Gibbs said Nashville's growth trends are apparent to banks across the Southeast, so some are moving in or trying to expand their presence in the market. He said banks such as Renasant Bank may not be operating in other areas that are seeing growth comparable to Nashville. "And those banks can grow their national exposure over a larger franchise," he said.

Cleaver said it sometimes feels as if every bank in the country has an office in the city. He said the competition is coming from banks of all sizes. He mentioned Commerce Bank, ServisFirst Bank, and IBERIABANK as banks either entering the market or wanting to do so.

"I could give you 10 more names of banks that either are here or want to be," said Cleaver.

And that growing number of banks has led to "fierce" competition for CRE loans in both structure and price. Cleaver said he is a bit concerned about a recent drop in underwriting standards among the banks in the area.

Cleaver said that within the next 24 months multi-family construction will likely slow because of the glut of projects now being developed. Hospitality in the next two years will also find a sweet spot and slow because the city will likely have enough rooms.

But Class A office space "has a ways to go" as the city is starved for that space, Cleaver said. In some parts of town, builders are having a hard time finding lots for residential construction projects. Banks are cautious about getting too heavily into that business, but there is a heavy demand for high-end developed lots, Cleaver said.

A significant number of public companies in the field are headquartered in Nashville, as well as companies that supply the large hospital chains. There are also spinoffs such as radiology groups and physician practices that surround those hospital operations in Nashville, he said.

Economy behind the CRE boom

But all the recent growth in CRE does not mean the market is reaching a saturation point. "It seems like it still has legs to me," Gibbs said. "I think Nashville is going to emerge as the leading city between Atlanta and Dallas."

Total non-farm employment increased by 25,200 jobs in the Nashville MSA from April 2013 to April 2014, with some of the largest increases coming in the leisure/hospitality, retail and government sectors. The area's unemployment figure in May 2014 was 4.60%, according to the Nashville Area Chamber of Commerce.