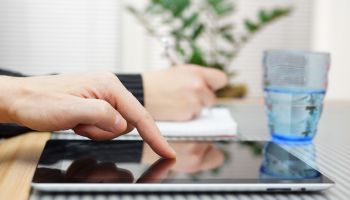 A key employee or a director has left a folder stuffed with confidential bank data or even customer records on a train or plane. Or perhaps he or she has left them behind in a restaurant. But in any event, they are gone.

More than ticklish. But for $266 million-assets First State Bank of St. Charles, Missouri, which went through such a scenario, ticklish didn’t degenerate into nightmarish.

Instead of carrying a folder or binder of critical information, the person had been carrying an iPad that used an app from Boardpaq to access records and reports. Using a special feature of Boardpaq, the banks simply transmitted instructions to permanently deactivate the app on that iPad. Without reinstallation and reauthorization of the app by the bank, the only thing the iPad’s finder could do is try a round of Angry Birds.

Security was a feature that Chairman and CEO Dave Strautz liked even before he had to use it.

“You might as well face it,” says Strautz. “With the number of devices we all carry and all we have to do, something like this is going to happen.”

For himself, he says, “I’m entirely happy that we don’t have all that paper to shuffle around anymore.”

As important as data security ranks, Strautz says that the bank’s adoption of Boardpaq and iPads—the app will also run on laptops—has made the bank more efficient. Directors readily adapted to having their board reports, access to historical data, and even minutes on iPads rather than paper.

Directors began using the devices and the app two years ago. Strautz says many hours of staff time are being saved through uploading reports and other documents for iPad viewing, rather than printing, collating, and transporting packets to directors in advance. Directors receive electronic notices when materials have been added to the bank’s online database.

Spreading the benefits around

More recently, Strautz has been spreading usage to other groups. A key example is the bank’s loan committee, which meets weekly. Distributing voluminous files and reports for committee members was a time-consuming chore, he explains, but now access is easier and faster. Special features allow users to highlight sections of reports and statements and the devices overall speed things along.

“That’s a great help because we really stress timeliness when we promote our loan approach,” says Strautz. The bank’s compensation committee has adopted its own version of Boardpaq and Strautz plans to broaden usage even further, soon, by expanding use of the iPad app to the bank’s management group.

Strautz says that the technology has already helped the bank during exams. Temporary access to relevant groups of documents are arranged for members of the exam team.

The flexibility of the iPad married to the app enables Strautz to travel, typically, with just the tablet and his mobile phone, which he uses as a hot spot when he can’t access other wifi signals.

Of course, such ready and safe access can extend the workplace ball and chain further than ever. A while back, “I was in Italy for a couple of weeks, and I had no trouble accessing most of the information about the bank that I had to access.”

The only downside: Strautz was on vacation.