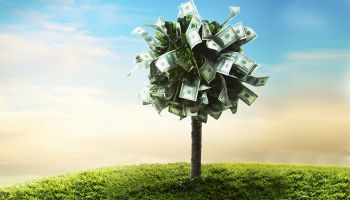 Nearly four years after the passage of the Dodd-Frank Act, most banks are ready to comply with the new capital rules that were mandated by the law, save for a small minority of small institutions that are still coming up short.

Banks have grown their capital bases considerably in recent years, putting them on much firmer footing to meet the new capital requirements, or Basel III rules, that regulators finalized in the summer of 2013.

Looking back at rules’ evolution

The Dodd-Frank Act tasked regulators with many reforms, including the directive to improve the quality and quantity of the banking industry's capital. In the summer of 2012, the OCC, FDIC, and Fed proposed three rules to strengthen capital requirements and eventually consolidated the proposals when passing the final Basel III capital rules a year later. The final rules excluded many of the most controversial provisions that received backlash in the wake of the original proposal.

Among other things, regulators scrapped a proposal to increase risk-weighting of residential mortgages, while grandfathering the regulatory capital treatment of trust-preferred securities held by institutions with less than $15 billion in assets.

Industry observers believed that the exclusions gave banks, both large and small, an easier glide path to complying with the final Basel III rules, and SNL's analysis supported that conclusion. Some observers noted, though, in the aftermath of the final rules that smaller banks were not prepared for a "lengthy and complex" capital regime that places a much greater emphasis on common equity, assigns higher risk-weightings to high volatility commercial real estate and past due loans, and brings a whole host of deductions from regulatory capital. 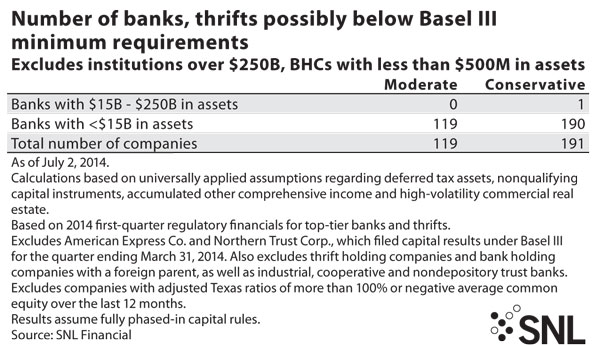 Under SNL's "moderate" analysis, no deferred tax assets are considered related to operating losses and tax credit carryforwards. Concentration in high-volatility commercial real estate is estimated to be low.

The "conservative" analysis categorizes a portion of deferred tax assets as related to operating losses and tax credit carryforwards. Concentration in high-volatility commercial real estate is estimated to be high.

The "moderate" and "conservative" scenarios include trust preferred and cumulative perpetual preferred securities in capital for banks permitted to "grandfather" them in their capital ratios. Both scenarios also assume all banks opt out of including accumulated other comprehensive income in capital. Assumptions under the aforementioned scenarios remained the same between the original and final rules where applicable. Companies were considered to fall short of the Basel III requirements if they had a common equity Tier 1 ratio below 7%, a Tier 1 ratio below 8.5%, a total risk-based capital ratio below 10.5% or a leverage ratio below 5%. Where applicable, these thresholds include the capital conservation buffer.

The analysis treats Basel III as if it were presently implemented; however, sections of it will be implemented over a multiple-year time frame. Click here to access the model in Excel.

SNL's most recent analysis found that the capital bases of large banks continue to be well-prepared for the implementation of the final Basel III rules. SNL's analysis did not include institutions with more than $250 billion in assets that are subject to the advanced approach of the Basel III rules. Assuming full implementation of Basel III, SNL found that the 20 largest banks with less than $250 billion in assets would report a median common equity Tier 1 ratio in a possible range of 9.95% to 10.45% and a Tier 1 ratio in a possible range of 10.55% to 11.20%. Both ranges are well above the required minimums.

Most small banks have ample capital to comply with the Basel III standards, as well, but a sizable block of institutions still fall short of the requirements. Smaller institutions narrowed the shortfall to the final Basel III rules by the end of 2013, though progress slowed considerably in the second half of the year. Smaller banks made modest progress again in the first quarter.

Smaller banks have long lagged larger institutions, accounting for a greater portion of the industry's shortfall under the proposed rules despite their smaller size. In the second and third quarters of 2013, those institutions were responsible for the entire shortfall measured by SNL and accounted for the vast majority of the shortfall in the fourth quarter of 2013 and the first quarter of this year.

Assuming the full phase-in of the final Basel III rules, SNL found that institutions with less than $15 billion in assets would post a capital shortfall below the minimum requirement based on first-quarter data of $1.23 billion, or 1.31% of their risk-weighted assets under the "conservative" scenario, compared to $1.35 billion, or 1.12%, at the end of the fourth quarter of 2013 and $1.42 billion, or 1.26%, at the end of the third quarter.

The size of possible capital shortfalls has steadily shrunk, albeit modestly, but SNL has found that even more would have fallen short of the minimum Basel III requirements when 2013 closed compared to periods earlier in the year. That trend reversed in the first quarter of 2014, when SNL found that 190 U.S.-based banks with less than $15 billion in assets would fall short of the minimum Basel III requirements under the "conservative" scenario, compared to 210 at the end of the fourth quarter, and 200 at the end of the third quarter, while 119 banks would fall short under the "moderate" scenario, compared to 139 and 131 banks in the fourth and third quarters, respectively.

SNL's analysis found that banks falling short of the minimums should be able to build their capital to the required levels in a relatively short time and even more quickly than in recent quarters.

When assuming at least a 5% return on common equity, SNL found that banks with less than $250 billion in assets, excluding bank holding companies with less than $500 million in assets, could earn back their shortfall to the minimum capital requirements on a median basis in just 0.95 years under the "conservative" scenario and 1.11 years under the "moderate" scenario. Comparatively, SNL measured the median earn-back period for banks at the end of the fourth quarter at 0.90 year under the "conservative" scenario and 0.91 year under the "moderate" scenario. 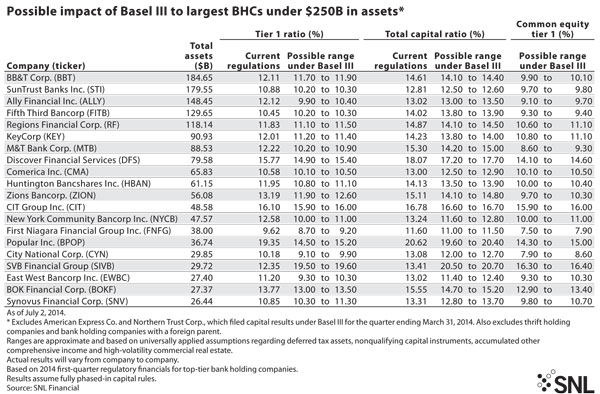