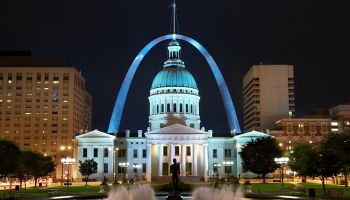 Banks in Missouri searching for opportunities to boost income could encounter some obstacles to growing organically or doing deals.

Lower-than-average household income in the "Show-Me State" could reduce demand for or increase the cost of offering financial services. Nonetheless, Missouri does hold opportunities in the form of rising projected wealth. At least one major super-regional bank is actively opening branches while its competitors shutter locations.

Missouri has a large number of small banks. The state's Division of Finance says it ranks fifth in the nation for total number of banks, "which is really quite amazing [because] we're not the fifth most-populous state," said John Howe, Missouri Bankers Chair and professor of finance at the University of Missouri's Robert J. Trulaske, Sr. College of Business.

Anecdotally, Howe said that many of the community bankers with whom he speaks that are focused on commercial and industrial lending consistently complain that they have money to lend but cannot find good loans. Unwillingness to compromise on tight underwriting standards may make it harder to make loans to companies that may still be regaining their earnings steam.

Howe serves as a director of a bank and said one request the board recently entertained was from a trash-hauling company that needed new trucks.

"That was a good loan, but I think the bank would be happy to see lots more like it," he said.

Potential, but barriers, for M&A

On the M&A front, the high number of small banks in Missouri could potentially dampen activity, given the hurdles these institutions face in trying to structure deals.

Why? Many banks below $1 billion in assets rely on cash or require access to capital to make acquisitions, said Rick Maples, co-head of investment banking at Stifel and at Keefe Bruyette & Woods.

Additionally, banks for sale in locations in smaller, rural towns mean fewer potential bidders and their limited asset sizes could be unattractive to buyers looking to add scale.

Maples predicted that most activity will remain confined to the St. Louis, Kansas City, and Springfield markets and will target institutions with more than $600 million or $700 million in assets. He characterized consolidation activity in the state as "steady," but "not overly robust." 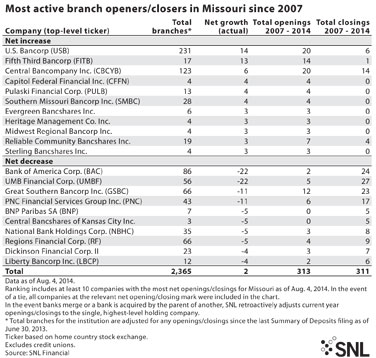 Perspectives from a player

One of the state's small banks is Festus, Mo.-based Midwest Regional Bank, which has $295.1 million in assets. Having returned to health just in time to weather the recession, Midwest is now primarily a commercial and industrial shop.

Michael Bender, Midwest Regional’s chairman, president, and CEO said it is the largest SBA lender in the state. The recovery in St. Louis means more lending opportunities as clients' finances have strengthened, and Bender said some banks have become "a lot more aggressive."

"There's an old adage in St. Louis that it's a pretty well-banked market and there's a lot of trading of credits among banks," he said.

Management decided to "branch in" toward St. Louis from its suburb location in order to save on site and talent costs, Bender said. Despite its size, Midwest Regional Bank clocked in as one of the top 10 net branch openers in the entire state, adding three branches for a total of four over the last seven years, according to SNL data. Bender said there are three more branches slated and an eventual goal of 10 locations.

Bender said that many of the branch closures he has seen in the St. Louis metropolitan area have been larger banks, such as PNC Financial Services Group Inc. and Commerce Bancshares Inc. PNC has been one of the most active branch consolidators in the state since 2007, closing 17 branches while opening six, according to SNL data. The company has 43 branches remaining in the state. Even with the branch closures, PNC has a 1.53% share of the state's deposits, growing deposits 11.78% year over year.

Not all large banks are closing branches in Missouri. With a 9.57% share of the state's deposits, super-regional U.S. Bancorp has the largest deposit market share in Missouri and leads in net branch growth over the past several years.

The company has opened 20 branches since 2007 and closed only six, according to SNL data. Much of the branch growth in the St. Louis market comes from in-store locations through a partnership with a grocer chain named Schnucks; the bank recently opened its 35th in-store location.

But Frankie Eichenberger, who has served as the St. Louis region manager for U.S. Bancorp for a decade, noted that the bank continues to open traditional branches and will add another in early September.

Even as U.S. Bancorp has invested in mobile and online channels and teller traffic has waned, Eichenberger said branch transactions remain steady as customers still use the locations to take out loans or discuss personal financial matters.

In-store branches are an economical way to defend and grow market share and offer customers greater convenience, she said. They are designed to handle all transactions that a stand-alone branch could, so both retail and small business customers can use them.

U.S. Bancorp's net branch openings are occurring at a time when its regional and national competitors such as Bank of America Corp.; UMB Financial Corp.; Springfield, Mo.-based Great Southern Bancorp Inc.; Regions Financial Corp.; and National Bank Holdings Corp. have closed more branches than they have opened in the state since 2007.

Eichenberger said the competitor branch closures give U.S. Bancorp an opportunity to explain to customers impacted by the lost location the convenience of its own branch network. 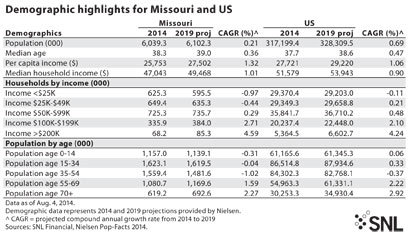 Projected improvements in household income could pose an opportunity for banks across the state, but Missouri's current low-income population poses a challenge to financial institutions.

Missouri has one of the highest numbers of individuals in the Midwest who report that they are unbanked or underbanked, said Radhakrishnan Gopalan, a professor at the Olin School of Business at Washington University in St. Louis, who has studied how individuals select banking products and how banks deal with defaults.

Missouri's per capita income of $25,753 is less than the U.S. per capita income of $27,721, though Nielsen projects that the state will enjoy a faster-than-average compound annual growth rate of 1.32% over the next five years. Gopalan said that some areas of Missouri may have large amounts of poorer households that have difficulty accessing banking services, and that individuals may spend "tremendous" amounts of money gaining access to liquidity through check-cashing facilities or payday lenders.

For instance, only 87.23% of households in Pemiscot County have transaction or demand-deposit accounts, according to SNL data—the lowest penetration rate of any county in the state. There are 30 counties out of Missouri's 115 that have a penetration rate of less than 90% for such accounts.

"I see a lot of opportunity but I have to add the caveat that banks have not been able to exploit these opportunities," Gopalan said. He later added: "They have to … see what innovation they can bring into the low-value, high-volume segment to lower their fixed costs while serving these customers. Online banking and mobile banking are ways you can reduce costs so you can serve a smaller-value transaction."

Many financial institutions have struggled to create a product that addresses these small-dollar opportunities without incurring high internal fixed costs and regulators' ire. Banks in the market such as Fifth Third Bancorp, Regions Financial, and U.S. Bancorp have discontinued direct deposit advance products after regulatory feedback. 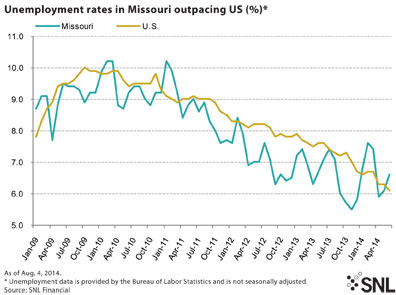