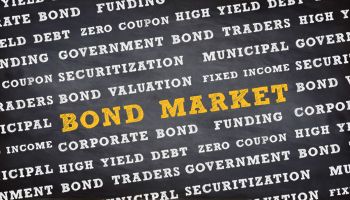 As long-term rates declined in the second quarter, bank bond portfolios moved back into positive territory.

SNL data show that U.S. commercial banks reported net unrealized gains of $2.98 billion in their AFS portfolios, which are subject to mark-to-market adjustments on a quarterly basis, at the end of the second quarter. The move represented a nearly $4.3 billion positive swing from the $1.31 billion in net unrealized losses banks reported in the portfolios at the end of the first quarter.

At the close of the second quarter, the yields on the five-year and 10-year Treasuries stood at their lowest level since the early summer of 2013, when long-term rates had just begun to move higher on talk of the Federal Reserve tapering its bond-buying program.

Long-term rates moved lower early in 2014, with the yield on the 10-year dropping 37 basis points in January alone. Rates then moved lower again in the first two months of the second quarter in the aftermath of lackluster GDP data and rising geopolitical risk associated with hostilities in Iraq and Ukraine. Long-term rates rose briefly in early June but declined in the closing weeks of the second quarter after Federal Reserve Chair Janet Yellen maintained a relatively dovish stance, downplaying recent increases in inflation. 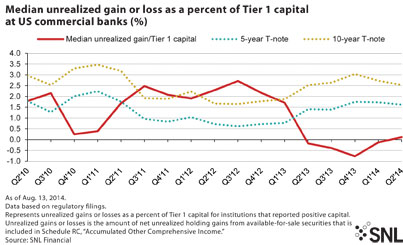 "Haters take note: the Fed can still push asset values higher. That was the biggest lesson of the first half of 2014, in which, despite the emergence of risk factors in both the interest rate and the risk asset markets, the values of both continue to rise," Janney Montgomery Scott Chief Fixed Income Strategist Guy LeBas noted in a July report. "Given the consensus position heading into the New Year that interest rates "must" rise, the rear-view mirror must be exceedingly confusing for many."

The consensus view of economists heading into 2014 was for the yield on the 10-year Treasury to exceed 3.4% by year-end, according to a survey conducted by Bloomberg in December 2013.

But, that has not transpired, and rates have moved in the other direction, dropping roughly 50 basis points through the first half of the year. The decline in rates, not surprisingly, proved favorable for banks' bond portfolios as 85.4% of commercial banks reported a positive change in the value of their AFS portfolios, while just 5.7% of banks showed a negative change. Nearly 9% of banks reported no change in the value of their portfolios, according to SNL data.

In aggregate, banks' investment portfolios moved back in the black early in the second quarter, according to the Federal Reserve data. The Federal Reserve's H.8 data—which tracks asset and liability balances at commercial banks, excluding international banking facilities—shows that those banks began reporting net unrealized gains the second week of April. During that week, the yield on the five-year Treasury fell 13 basis points, while the yield on the 10-year Treasury fell 11 basis points. 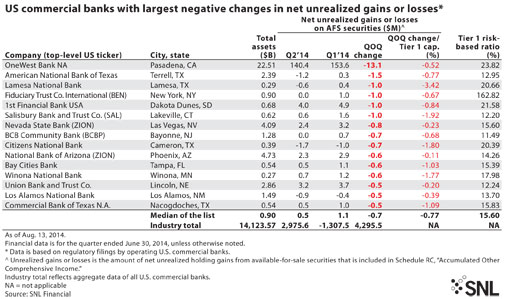 Under the final Basel III rules, however, changes in AOCI will also flow through regulatory capital. Banks with more than $250 billion in assets will be subject to the rule, while institutions below that level will have the opportunity to opt out of the provision. Banks looking to opt out of the provision must make that election during the first call report they file after Jan. 1, 2015.

It has been widely held that most smaller banks will opt out of the AOCI provision because the inclusion of unrealized gains and losses in recent years would have added significant volatility to banks' capital ratios, though it is unclear what action banks will take at this point.

The inclusion of unrealized gains and losses in regulatory capital ratios would have inflated banks' capital levels for much of the last few years. That trend changed somewhat in the second half of 2013 when long-term rates began rising off historical lows, but the recent decline in rates would have offered banks a boost to the regulatory capital ratios, assuming the Basel III rules were in effect today. 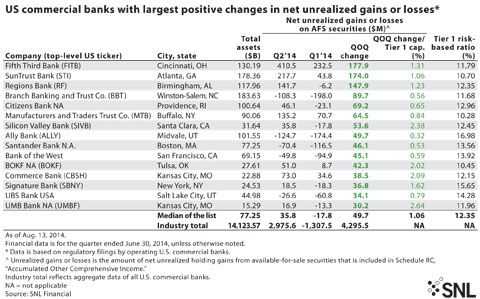 Far fewer banks experienced negative swings in the value of their portfolios in the second quarter and the institutions that reported decreases in unrealized gains or losses largely showed only modest downward adjustments.

OneWest Bank NA, a unit of IMB HoldCo LLC, disclosed the largest dollar decrease in the period, with the level of unrealized gains falling $13.1 million from the prior quarter. Part of the decline could have come as the company realized $4.7 million in gains on securities in the second quarter.

Banks just might find even more gains in their bond portfolios at the end of the third quarter if the current rate environment holds. Since the end of the second quarter, long-term rates have continued to decline, with the yields on the five-year and 10-year Treasury falling 3 basis points and 10 basis points, respectively. Many market watchers are still expecting long-term rates to move higher by year-end as the prospect of rate increases by the Fed nears, but for now, rates are holding to low levels.