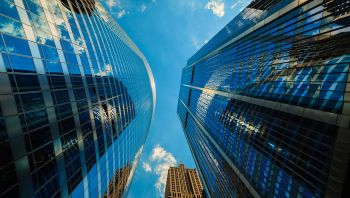 SNL ranks the largest banks and thrifts operating in the U.S. with a deposits-to-assets ratio of at least 25% for each relevant quarter. Some of the financial institutions that are regulated as bank holding companies did not meet the criteria and thus were excluded from the analysis. Examples include Goldman Sachs Group Inc. and Morgan Stanley.

In addition, industrial banks were also not considered for this analysis. One of the significant exclusions from the list is Salt Lake City-based UBS Bank USA, which reported $44.98 billion in assets as of June 30. 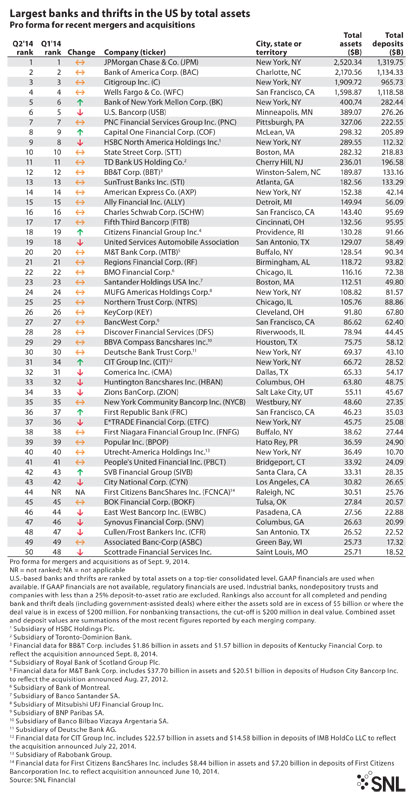 In compiling rankings, SNL calculated pro forma assets for companies with pending M&A deals or deals that have closed since June 30, 2014. To be used in calculating an adjusted asset size, the M&A deal must include a bank or thrift target with assets of at least $5 billion, or a deal value of more than $200 million. Three of the companies in the top-50 ranking have pending deals that qualify for adjustments.

Based on pro forma adjustments, SNL added $8.44 billion of assets and $7.20 billion of deposits to First Citizens BancShares, pushing the bank to the No. 44 spot on the list this quarter. The company would also gain 177 branches, 157 of which are in South Carolina, which would push the bank's pro forma deposit market share in South Carolina to 9.33% among banks and thrifts, according to the 2013 Summary of Deposits.

BB&T Corp.'s $367.8 million deal for Crestview Hills, Ky.-based Bank of Kentucky Financial Corp. could push its assets up by $1.86 billion to $189.87 billion, based on pro forma adjustments by SNL. The target's 32 branches, mainly located in the Greater Cincinnati area, would introduce BB&T to a new market. Bank of Kentucky reported $1.57 billion in deposits as of June 30 as well. The transaction is expected to conclude before the end of the year.

SNL has adjusted the assets of Buffalo, N.Y.-based M&T Bank Corp. to depict the pending acquisition of Paramus, N.J.-based Hudson City Bancorp Inc. The deal, which was announced in August 2012 and is still pending, would see M&T Bank Corp. add Hudson City's $37.70 billion assets as of June 30, to M&T Bank. Pro forma assets for M&T Bank would jump up to $128.54 billion from $90.84 billion. The bank remained at the 20th spot in the list quarter over quarter.

Based on these adjustments, the bank moved up to the No. 31 spot from No. 34 in SNL's previous analysis.

Some deals were not considered in this analysis. That’s because they either did not meet SNL's criteria or did not disclose sufficient financial information for pro forma adjustments. The pending sales of 68 branches by Bank of America in seven separate deals and the Sept. 3 announcement that BB&T would acquire 41 Texas branches belonging to Citigroup, cannot be adjusted for because they do not meet the criteria.

Other exceptions include JPMorgan's March 19 announcement that it is selling its physical commodities business to Geneva-based Mercuria Energy Group Ltd.