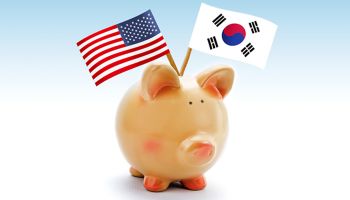 Although the population of Korean-Americans in the U.S. is expected to grow significantly in the coming years, banks that have traditionally served that demographic will not necessarily have an easy time capitalizing on the expansion.

Through the acquisition of Central Bancorp Inc. that closed Aug. 31, Hanmi now has a presence in Dallas, Houston, Austin, Chicago, and Virginia, as well as California. The bank has no branches in Seattle, which is expected to see a rise in its Korean-American population, but it does have a loan production office there.

"So we are going to continue to dedicate resources to expand our branch footprint and also look for additional opportunities to expand our presence in those markets," said Hanmi President and CEO C. G. Kum. 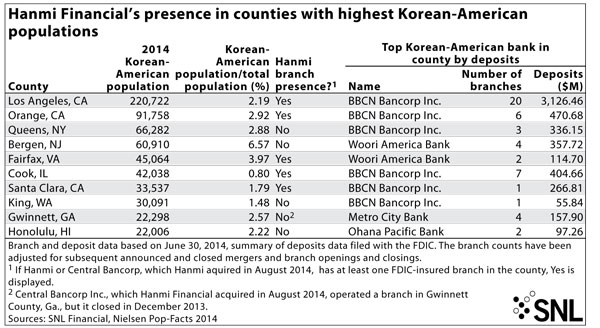 BBCN, meanwhile, has completed three whole-bank deals since 2011, while Wilshire completed two in 2013.

Kum told SNL that Korean-American banks in the U.S. were largely built by the immigrant generation that came to the states from the late 1970s through the 1980s and often became successful businesspeople. "It's that group that in essence supported the growth and the success of the Korean-American banking industry here in the United States," he told SNL.

Kum said the number of immigrants coming to the U.S. from Korea today is about 60% of what it was during the peak. Koreans coming to the U.S. now tend to be younger, less inclined to be entrepreneurial, and not as likely to automatically bank with a Korean-American institution, according to Kum.

So while the total number of Korean-Americans is growing, the core customer base for Korean-American banks is not necessarily going to be expanding. "That's a challenge, but it's also an opportunity for Hanmi," Kum said.

But the question is how those banks will service that population. Coffey said today's immigrants from Korea generally have a much easier time assimilating into American culture, as more tend to speak English and have a higher level of education. So banks like Hanmi will have to work harder to compete for business with mainstream U.S. banks, in part by offering more commercial and industrial loans, additional cash management products, and a wider variety of depository products than they have in the past, according to Coffey. 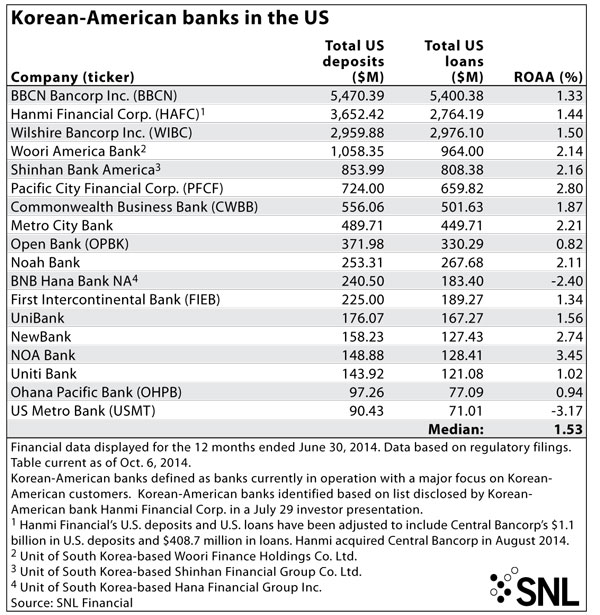 Thinking beyond the niche

Kum said Hanmi's business model now calls for a broader and more diverse customer base. That base will still be concentrated among Korean-Americans, but the bank is looking to add more Chinese-Americans, and south Asians, as well as customers without any Asian background. Additionally, the company wants to make itself more attractive to younger Korean-Americans, who tend to be less loyal to Korean-American banks compared with the older generation.

As part of the latter effort, Hanmi will be refreshing the look of its branches to make them more contemporary, and it is revamping its logo and color scheme. Branches will be staffed by more bilingual employees who can converse more easily with the second Korean-American generation, Kum said.

Hanmi is also focusing on an investment in technology to attract younger clients. In general, Korean-American banks have not had the level of technology that more mainstream banks have had, according to Kum.

Coffey said some of the smaller Korean-American banks will likely need to get bigger before the "big three" Korean-American players show interest in acquiring them, but given the regulatory environment it might be easier to buy a smaller bank. Kum agreed that the big three need a bank of a certain size to move the needle, and there are a limited number of those left.

"The universe [of Korean-American banks] is not huge," he said. Hanmi will look at smaller transactions to enter particular markets or to expand in areas such as New York/New Jersey or Atlanta.

"Our acquisition strategy is not exclusively limited to Korean-American banks," Kum said.

Hanmi was the last of the big three to expand outside of Southern California. As such, Coffey said it has more opportunity to do M&A than the other two. The bank is excited about having a clean slate in the new markets acquired through the Central Bancorp deal, he said, adding that "it can be grown the Hanmi way."

Increasingly, the Hanmi way means focusing on C&I and the entire client relationship rather than just whatever CRE business it could land, according to Coffey. Hanmi also wants to diversify its asset classes so that it can get more recognition from the institutional community. 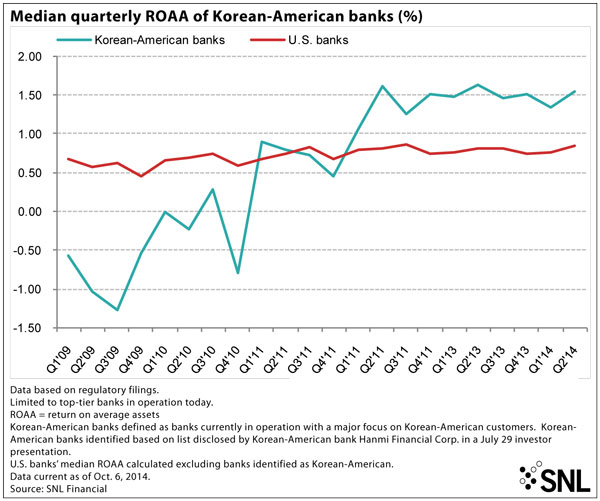 For the 12 months ended June 30, Korean-American banks overall had a median ROAA of 1.53%, while the median ROAA for the rest of the banks in the country was 0.79%, according to SNL data.

Kum said Korean-American banks have been good at meeting customers' needs in terms of CRE and small business loans. As a result, those banks have historically generated a higher level of income in relation to peer mainstream banks.

But there is a disconnect when it comes to stock prices, Kum said. "We don't get the multiple that the comparable mainstream banks have had," he said.

That is because there is a perceived risk attached to banks focused on one particular demographic sector, he said. According to SNL data, Hanmi Financial traded at 13.9x EPS on Oct. 9, compared to the SNL Small Cap U.S. Bank & Thrift Index's multiple of 17.4x EPS.

Coffey said that bank investors are sometimes turned off by the amount of income being produced by the sale of SBA loans—that the business is inherently a "treadmill" operation where loans have to be generated over and over each quarter, whereas more traditional business banks tend to have a more solid base on which to build each month.

"So I think investors are looking at the recurring nature of the income from the Korean banks and applying a smaller multiple to earnings on it than they would a bank that has a steady state of earnings," Coffey said.

Most Korean-American banks have also had a funding base that consisted heavily of time-based CDs. Compared to other Korean-American banks, Hanmi has the highest level of non-interest bearing DDAs at 36%, according to Kum. But top-performing mainstream banks have that number closer to 40%, "and that's a target for us," Kum said. 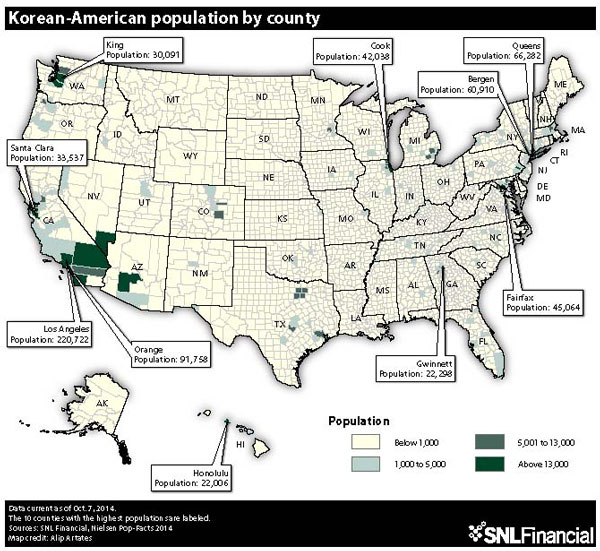