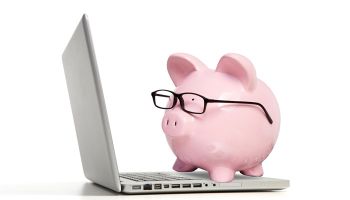 Many community banks around the country have seen large quarterly increases in technology and communications spending as such costs become an ever-increasing part of total operating expenses.

Banks are also forking out on compliance tools, such as network and web security tools, as well as card risk and monitoring services and mortgage origination system upgrades. Banks are additionally expanding imaging capabilities across the board.

In particular, they are adding features that mirror the approach taken by regional banks.

"So I would say it's a fairly wide list of areas that community banks are increasing spend on," Scholten said. A smaller portion of the technology expense is directed toward attracting the younger generation.

Scholten believes it is important that banks spend money to attract that demographic.

But Scholten said it still feels like much of the technology expense involves risk and compliance spending because those are the key areas regulators are paying attention to.

"They want to see community banks make big strides in understanding, managing, and monitoring risk and regulatory compliance," he said. 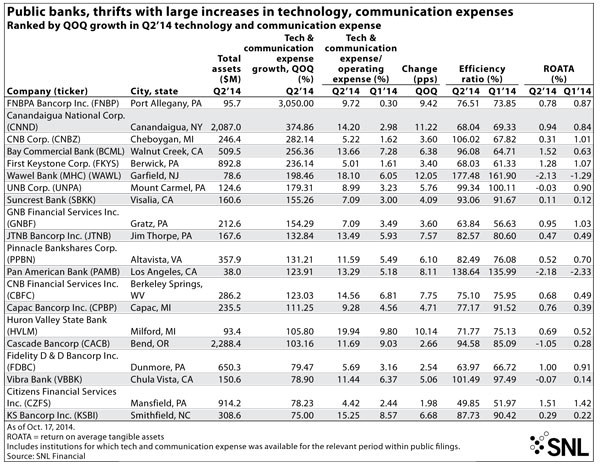 Joseph Brannen, president and CEO of the Georgia Bankers Association, told SNL there are three areas where Georgia banks are spending more on technology.

One area is for new technology to meet shifting customer preferences, he said. For example, several banks in the state are making a major investment in video teller machines. "And, of course, there's all the mobile banking adoption spreading to more and more community banks on an almost daily basis," he said.

Another area of tech spending is focused on keeping systems running smoothly, Brannen said. "We had one community bank member that spent $1 million in the past year to upgrade their systems because Windows XP support ended," he said.

And there is also a lot of investment in security enhancements for data and technology systems and software, said Brannon. 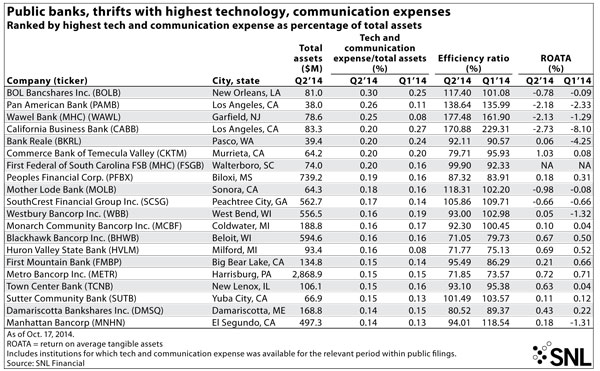 Curve still trending up … and up

In-person volumes have steadily declined and shifted toward remote capture, mobile deposits, bill pay, ACH, direct deposit and ITM/ATMs—meaning banks do not need the same type of infrastructure in terms of brick-and-mortar branches and branch staffing to serve the same customers, he said.

At Citizens National Bank, management has attempted to walk the "fine line" between maintaining good in-person customer service while also offering the latest products allowing customers to transact with the bank using technology.

"At the end of the day, we have to provide the services and products our customers demand or else our customers will find another bank that will, and we'll have to find new jobs," Engemoen said. "Other community banks are facing the same reality, so I'd expect investments to continue to occur in technology."

While Engemoen said it is not economically feasible for community banks to lead the innovation charge creating the "latest and greatest" products, Citizens National Bank has nevertheless taken the approach that it has to be an early adopter of the latest products to remain competitive.