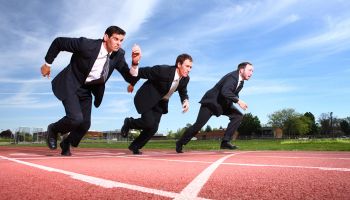 The low interest rate environment has created increased pricing competition for popular consumer loan products. In some regards, banks and thrifts are at something of a disadvantage compared to credit unions, which can apply savings from their nonprofit status to lower interest rates for select loans. But SNL data on median average interest rates show that the pricing gap dissipates when it comes to mortgage loans, and experts say all institutions face a potential change in consumer demand when the Federal Reserve raises interest rates.

The pricing on a financial institution's consumer loan products provides insight into how the company hopes to grow and shape its portfolio, said Amol Shah, a director at global financial services consulting firm AlixPartners. Price is one part of a value proposition that institutions offer consumers, alongside things like technology and branch locations.

"There's a lot of strategic intent in terms of where individual banks decide how they want to grow their consumer businesses, what their product portfolio looks like and where they want to emphasize their product growth or de-emphasize in terms of developing a customer relationship," said Shah. "That tends to vary bank by bank. Oftentimes, a credit union may be more aggressive in pricing in one area, where a bank may have more aggressive pricing on another product. That has as much to do with their market positioning and what they view as their anchor products to bring in a relationship, which tends to be different—it's not just about price."

Credit unions may have an advantage when it comes to competitive pricing on loans; their nonprofit status exempts them from federal income tax, and credit unions say they return those savings to consumers in the form of higher rates on deposits and lower rates on loans, said Kevin Kirksey, managing director in the Strategic Solutions Group at financial advisory services firm ALM First.

But credit unions are also constricted by the member business lending rule. This limits the amount of business loans most can make to 12.25% of total assets, making auto and mortgage loans a credit union's bread and butter in the lending portfolio. In contrast, banks and thrifts have the option of expanding commercial and industrial lending or commercial real estate business lines.

"A lot of banks are agnostic if they can get loan and deposit business. But a lot of the credit unions I work with are certainly very active in member engagement and member services," Kirksey said. "It's not just about that interest rate and getting someone in the door for that one product, it's about getting them engaged with the institutions through the deposit mix as well."

One area where credit unions appear to be offering lower interest rates is auto loans. Banks and credit unions, as well as the financing arms of dealers and manufacturers, responded to the fervent demand for car loans from consumers, causing interest rates to slide.

These loans tend to be low rate and have fairly aggressive terms because they have relatively short duration, Shah said; heavy competition and the secured nature of the loans also impacts their credit structure. The published median interest rate for auto loans at credit unions is lower than the published median interest rate on a direct auto loan at banks, according to SNL data. 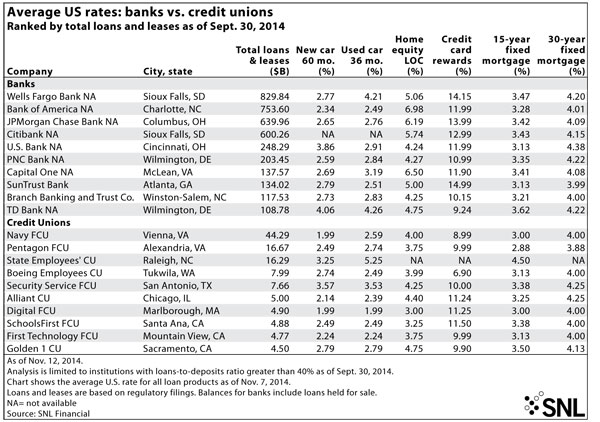 The published median interest rate for a 60-month new car loan at credit unions was 2.69%; compared to 4.75% among banks.

Bank of America NA had the lowest published average rate for a 60-month new car loan among the 10 largest banks, at 2.34%, and the lowest average published rate for a 36-month used car loan, at 2.49%.

In contrast, the competitive environment for mortgages has closed the pricing gap between credit unions and banks. Mortgage rates have been increasing at a time when rates on other consumer lending products like auto loans and home equity lines of credit have decreased, SNL data show. The long-term duration of mortgages means the rate tends to follow movements in the 10-year Treasury note.

The product has a national reach, despite its local delivery, and many of the money center banks have a share of the U.S. mortgage market that exceeds their deposit share, said Lee Kyriacou, managing director at financial services consulting firm Novantas. The interest rate is "the single number" that matters most to consumers when getting a mortgage, and larger players have scale that allows them to offer competitive prices.

"People all check the internet now for mortgages. It is the most competitively shopped of the [consumer loan] products because it's such a big-ticket item; even a quarter-point affects what you can afford," said Kyriacou. "In fact, some banks don't like showing their rates online for that reason."

Kirksey said the credit union industry as a whole is now the second-largest mortgage lender in the country. He said one reason for the sector's ascension is the number of institutions willing to offer adjustable-rate mortgages or shorter-term loans that address the needs of an aging demographic. He also said the threat of the Qualified Residential Mortgage rule may have led some banks to pull back from the market, allowing credit unions to capture some loans that may not qualify under the rule.

The possibility of rising rates will have an enormous impact on the mortgage market, which behaves like a "huge bond" worth upwards of $20 trillion, Kyriacou said. An increase in rates will cause property prices to fall, which he said is one reason why the Federal Open Market Committee is so cautious about increasing rates.

A rising rate environment may not just impact the demand for mortgages, but could dampen overall consumer spending because of the higher cost of borrowing, Shah said.

Pricing is one of many levers a bank or credit union can pull to increase their value proposition to consumers. In order to avoid potentially "flip-flopping" on price to keep up with current market demand and mitigate interest rate risk as they grow their portfolios, institutions must ensure that they have a "deliberate and thought-out strategy and the right governance structure," Shah said. He added that the historical level of consumer demand established over the last five to six years may not hold up going forward.

"Now there's consternation as [mortgage] rates hit 5%. What will be the impact on ongoing new purchase and new financing activity and how will that impact banks?" Shah said. "I think this is the new paradigm that banks are looking at now and [they are] developing more prospective views on how that will impact their portfolios." 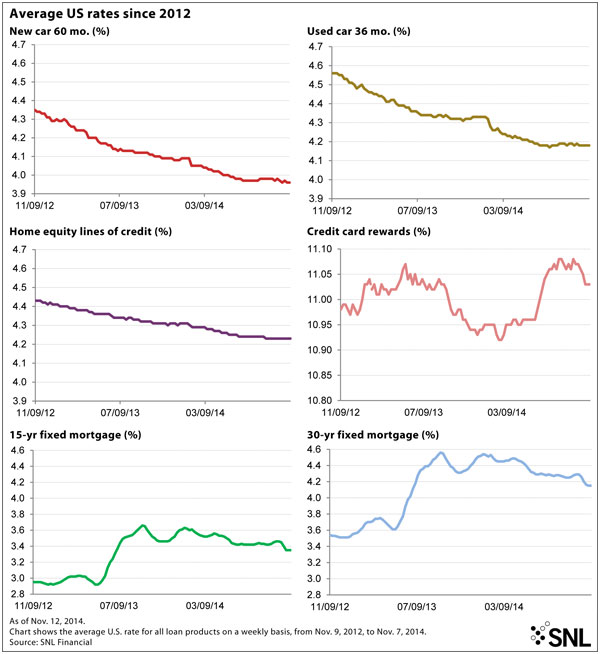