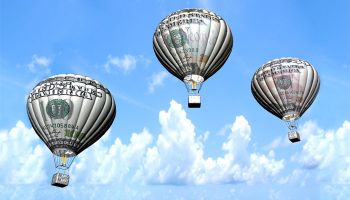 Banks are beginning to test the waters and build term funding on their balance sheets before interest rates rise.

Bankers and advisers generally agree that the composition of deposits will change, or at least come with a higher cost when interest rates eventually rise. Given the flood of liquidity into the banking system since the crisis and the tremendous growth in money market accounts in particular, many in the industry expect funds to move into higher-yielding products like CDs when the rate cycle turns.

Although most banks have sought to decrease their CDs in recent years and have held those balances steady through the third quarter, there is evidence that at least some institutions are taking steps to build term funding to prepare for the future.

For example, the banking industry, increased FHLB advances in the third quarter by 1.3% from the linked quarter and by more than 13% from the first quarter of 2014, SNL data shows.

And while pricing on core deposits has held fairly stable, Sterne Agee & Leach's bank analyst team noted in a report that U.S. banks are increasing rates on longer-dated CDs. The team said the increases are most pronounced in the Northeast, where average rates on three-year and five-year CDs were 75 basis points and 124 basis points, respectively, compared to average yields of 64 basis points and 107 basis points across the rest of the country. 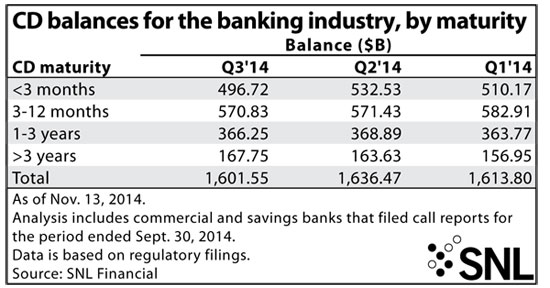 The banking industry as a whole actually decreased CD levels in the third quarter, with the balance falling to $1.601 trillion from $1.636 trillion in the second quarter and $1.613 trillion in the first quarter, according to SNL data.

Banks did report modest, linked-quarter increases in CDs with maturities greater than three years. Still, banks large and small did not increase the relative level of CDs on their balance sheets, nearly maintaining their balances as percentages of liabilities across all maturities.

During past tightening rate cycles, CDs became much larger portions of banks' deposit bases. SNL data shows that banks saw their customers shift into higher-yielding deposit products such as CDs between Jan. 1, 1994, to Dec. 31, 1994, and from Jan. 1, 2004, to Dec. 31, 2006. In 1994, long-term rates rose considerably, with the yields on the five-year and 10-year Treasury rising close to 260 basis points and 200 basis points, respectively, from year-end 1993. Between 2004 and 2006, the Federal Reserve worked to cool down the economy with steady increases in short-term rates. SNL found that CD balances, particularly CDs over $100,000, became larger portions of banks' deposit bases during the two tightening cycles, while money market account balances declined in 1994 and rose modestly between 2003 and 2006. 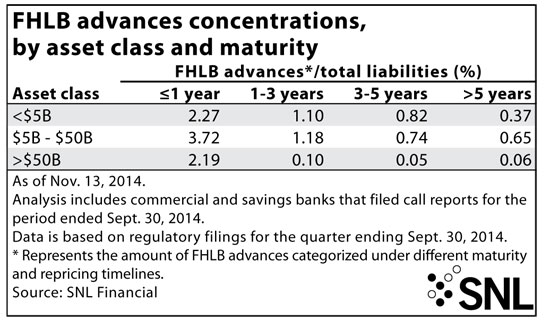 The reverse has occurred in the wake of the recent credit crisis as rates have fallen substantially. Since 2007, bank CD balances have decreased dramatically and the decline has been the most pronounced in CDs over $100,000. Money market account balances, meanwhile, have increased notably, growing to roughly 46.0% of all domestic deposits at the end of the third quarter of 2014 from approximately 39.2% in 2007.

Those levels are far above historical norms, causing some observers to suggest that banks should model significant outflows in money market accounts given their tremendous growth in recent years.

Scott Hildenbrand, managing director and chief balance sheet strategist at Sandler O'Neill & Partners LP, for instance, noted at the SNL Bank M&A Symposium in early October that the growth in money market accounts over the last five years makes him nervous. He cautioned that those deposit balances could leave the balance sheet in a rising rate environment.

"I just think they need to run some what-if scenarios because you're not going to nail it and get it right. But, I would rather run a couple of iterations and say this could be the worst case and we still feel okay with the margin," Hildenbrand said at the event. 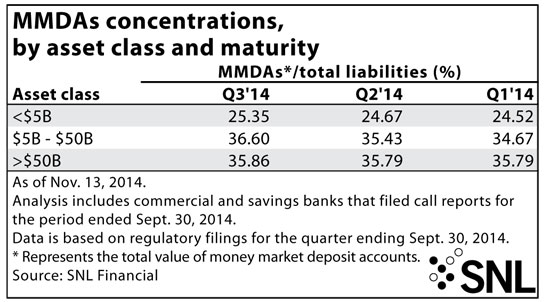 Some banks have also acknowledged that the change in the rate cycle could produce different results. Evercore ISI analyst John Pancari noted in a report reviewing the recent BancAnalysts Association of Boston conference that several banks at the event said they expect deposit repricing betas to be higher than the roughly 50% rate experienced in prior tightening cycles. He said that some banks even indicated a willingness to offer deposit promotions for money market funds or CDs to "test" the market and build liquidity, suggesting that deposit costs have bottomed."

"Most banks are asset sensitive, but banks appear to be concerned about the speed of deposit repricing in a rising rate environment," Pancari wrote in a Nov. 7 report.

Regulators are focused on liquidity as well. The FDIC has encouraged banks to model for changes in non-maturity deposits and "surge" deposits that flew into the system during the crisis.

"We believe banks with low L/D ratios could become more attractive targets as this plays out," the Sterne Agee team wrote in a report. 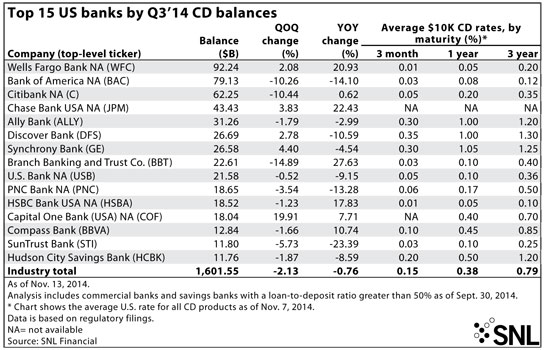