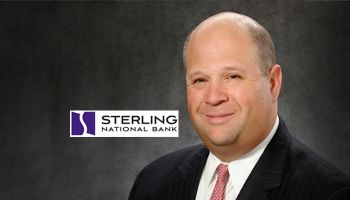 How does a smaller bank compete in the canyons of Manhattan and other parts of New York City for a share of the city’s commercial credit business?

Teamwork—and not just a bow to the concept, but a meaningful structure; a stress on continual service through cooperation on those teams; and a preference for seasoned players to fill those teams.

Sterling is the main subsidiary of $7.3 billion-assets Sterling Bancorp, Montebello, N.Y., which has been been expanding its efforts in the NYC metro market. (In early November Sterling announced a merger with Hudson Valley Holding Corp. The deal, expected to close in the first half of 2015, would result in a $10.5 billion company.)

Bagatelle might well be describing himself. He’s been involved in New York banking for many years. First he was a banking specialist with KPMG, and then he crossed to the banking side. Among his achievements was being part of the team that started the city’s Signature Bank, working for many years at Republic National Bank, and starting Herald National Bank, sold to John Kanas’ BankUnited, N.A., in 2013 to become part of that Florida company’s Northern strategy.

Slicing up the pie

Even post-crisis, New York City’s commercial lending business hasn’t come back with a boom, though there are many promising developments coming along. Bagatelle explains that hiring among NYC firms hasn’t come back to earlier levels, partly through caution and partly because technology has replaced many of the people who might have filled out the workforce pre-recession.

But Bagatelle says that the city is a market ripe for the smaller player. Silicon Alley and other high-tech enclaves in the city represent good opportunity for banks like Sterling, says Bagatelle. Real estate development at the Hudson Yards—a massive multi-agency redevelopment project on Manhattan's West Side—will stimulate more activity. And consolidation of the smaller institutions in New York banking also plays to Sterling’s size.

Aside from this is the sheer size of the New York business market, according to Bagatelle.

“This market is so large, there is more than enough to go around,” he explains. “You can still do quite well by capturing a small market share.”

This isn’t to say this is a market of low-hanging fruit. Commitment must be made to serve the slice of the pie that a bank wants.

This is part of the reason that Sterling prefers to hire experienced bankers.

Bagatelle looks for bankers with connection to various New York centers of influence who are known and stay known, wherever they go.

Bagatelle says smaller players like Sterling have an edge on the city’s big banks. This plays especially well among the small and mid-sized company in Sterling’s sweet spot, $15-$20 million in annual revenues.

Large banks tend to assign smaller companies to new bankers, and as a result the firms often find themselves working with beginners, Bagatelle says. When they come to Sterling, they are working with people who know banking well and can act more as trusted advisors. And the intent is that they will continue to be the point of contact for the customer.

Customers of the big banks, says Bagatelle, are often “starting all over again with a new person.”

This is classic community bank blocking and tackling. And it’s a long-proven strategy, whether the market is Manhattan, Kansas, or Manhattan, New York.

Teams that serve your needs

However, while Sterling bankers are known as individuals, they aren’t organized that way. Instead, Bagatelle gathers them into teams that work with companies.

“Our relationship managers do it all,” says Bagatelle, “To the client, they are Sterling National.”

Team leaders bring clients aboard, he explains, and the team serves them. Customer CFOs always work with some member of the team.

Teams don’t handle credit management—the bank’s credit analysts handle that—but they are not simply “suits” looking for any business with a pulse. And that’s because of the way Sterling evaluates and compensates its teams and the team members.

Every team a bank

Bagatelle explains that every team is, essentially, a “mini-bank.”

Part of this entails the bank running a separate P&L on each team, which plays a significant role in annual compensation. Team members have a stake in how the team performs.

This is not unlike the way bankers treated branches years ago, before they became, in many areas, a retail distribution arm without credit authority and such. However, this is at the team level, and not related to any physical structure.

Another element of the team approach relates to capital. Credits granted receive appropriate risk ratings, and more capital is allocated to loans that aren’t as strong as others.  The team pays more for riskier credit, in that sense, and has a built-in desire to weigh risk versus likely return versus capital burden.

“They don’t have credit authority,” says Bagatelle. But clearly they have to know their clients cold.

Team-level profitability is evaluated, and that is where compensation will differ.

And that is how team members get their slice of the pie.