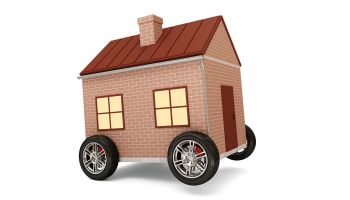 Mortgage servicing rules have moved up the priority list of policymakers, as some industry groups and financial analysts make the case that the high cost of servicing delinquent mortgages is restraining access to credit.

The Federal Housing Finance Agency on Jan. 30 proposed minimum capital rules for nonbank mortgage servicers. Allaying some industry concerns, analysts said major players in the space would have little trouble meeting the rules. The proposed requirements include a minimum net worth of $2.5 million, plus 25 basis points of the unpaid principal on total loans serviced in addition to a minimum capital ratio of 6% and a minimum liquidity standard.

Fitch Ratings on Feb. 3 issued a release—“FHFA's Proposed Capital Rules Not a Panacea”—in which it said the minimum requirements could pose a challenge for smaller nonbank servicers but that larger players, such as Ocwen Financial Corp., Nationstar Mortgage Holdings Inc., and Walter Investment Management Corp., would have little trouble meeting them. The rating agency said the requirements would not reduce the default risk of mortgage servicers and that its issuer default ratings for servicers would remain below investment-grade levels due, in part, to cyclicality, thin profit margins, and regulatory risks.

In a Feb. 2 note, Compass Point Research & Trading analysts Kevin Barker and Isaac Boltansky wrote that the low barrier could be seen as a positive for servicers, predicting that all publicly traded servicers would meet the requirements. Specifically, the analysts noted that Ocwen and Nationstar could run into trouble on the tangible net worth requirement, with both companies appearing to sit at 32 basis points each—relatively close to the minimum of 25 basis points.

And the analysts said Walter Investment is "the biggest winner" of the rules because they were set at the subsidiary level without addressing the liquidity or capital position of the holding company.

In addition to the rules not being as restrictive as feared, the mortgage servicing industry might soon enjoy a more favorable regulatory environment, too, especially considering policymakers appear dedicated to increasing access to credit, however possible.

The Mortgage Bankers Association hopes to convince the Federal Housing Administration to introduce flexibility to its foreclosure requirements.

The core issue is a disconnect between the FHA and government-sponsored enterprises Fannie Mae and Freddie Mac, which push servicers to foreclose on properties in a timely fashion to maximize recovery, and the Consumer Financial Protection Bureau, which instituted several borrower protections in 2013 to slow down the foreclosure process in response to the robosigning controversy.

For example, the Consumer Financial Protection Bureau outlawed the practice of dual tracking, whereby servicers proceed with the foreclosure while also processing a borrower's request for a loan modification. And the CFPB added additional servicer requirements in the name of borrower protection in November 2014. 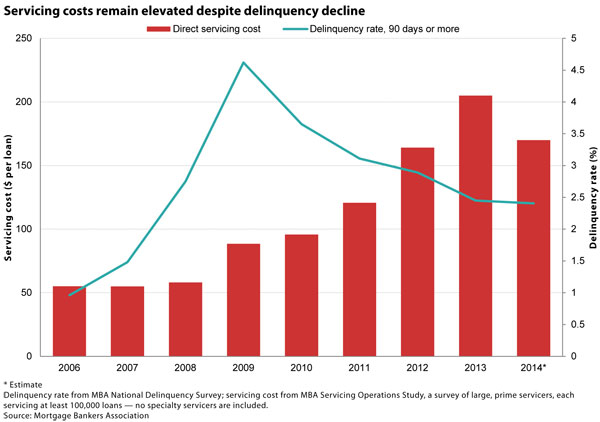 The notifications required by the CFPB can create difficulties for servicers considering requirements put upon by the FHA or the government-sponsored enterprises. The FHA generally requires servicers to initiate foreclosure within six months of the default date, and Fannie Mae sets specific timelines for the maximum allowable days between the borrower's last payment and the foreclosure sale date.

"We did a fairly detailed analysis to see if there were any outright conflicts between the CFPB rules and, say, the standards that Fannie, Freddie, FHA use," said Pete Mills, senior vice-president of residential policy and member engagement at the Mortgage Bankers Association. "What we found is there are not outright conflicts, but there are what we call situational conflicts. If the borrowers behave exactly as you would hope they would behave, there aren't any conflicts. The problem is borrowers don't always behave that way."

As a result, foreclosure timelines have become longer, raising costs for servicers even though the number of delinquent mortgages are on the decline. The Mortgage Bankers Association reports the percentage of mortgages at least 90 days delinquent declined to 2.41% in 2014, down from a peak of 4.62% in 2009. However, servicing costs remain elevated, at roughly $170 per loan, compared to $89 per loan in 2009, though the 2014 estimate is down from $205 per loan in 2013.

Back in October 2010, the Mortgage Bankers Association ran an analysis to show the stark differences between state foreclosure timelines and the wildly different costs servicers could incur if they missed an FHA deadline to initiate foreclosure. In New York, the servicer would lose roughly $5,653 in interest curtailment, compared to a loss of $1,726 in Alabama.

While the MBA has not rerun the analysis, it seems safe to assume that the situation has only deteriorated for servicers, considering foreclosure timelines appear to elongate with each passing month.

Since the CFPB regulations are federal, timelines in Alabama have become longer as well, though not to the same degree. Black Knight reports the typical foreclosure sale in December 2014 in Alabama had been delinquent for 617 days, compared to 383 days in December 2010.

Robosigning: Not quite the problem claimed?

Making the situation particularly puzzling for some in the industry is the impetus behind the increased servicing costs—the robosigning controversy—appeared to be oversold in terms of borrower harm. The Federal Reserve conducted an independent foreclosure review into the matter but ended up shutting down the review earlier than anticipated due to higher-than-expected costs and lackluster borrower interest.

Among the 103,820 file reviews completed by Dec. 31, 2012, the process had identified that 4.5% of the loans contained servicer errors causing financial harm, or 4,670 loans. Of those, only 805 loans had been submitted by a borrower. In other words, the vast majority of errors either went unnoticed by borrowers, or the borrowers did not consider the error worth the time to pursue financial remediation.

"Nobody ever said, 'was anybody harmed by that?' It turns out, out of millions of people who were foreclosed, not many of them were harmed," said Robert Couch, a partner with Bradley Arant Boult Cummings LLP. "They were thinking they were going to find all these smoking guns, and they didn't really find all that many."