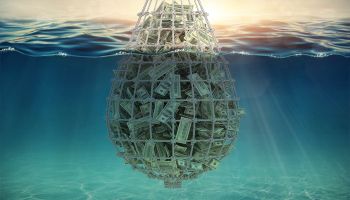 Banks and thrifts reclassified billions of deposits as brokered in the fourth quarter of 2014, most likely in response to a clarification of FDIC guidance and a detailed FAQ released around the new year.

FDIC stated in its guidance that the move is intended to provide greater clarity as banks release new and different products—but the change could make the banks seem riskier or increase deposit insurance assessments. [See “Guidance on Identifying, Accepting, and Reporting Brokered Deposits,” Financial Institution Letter-2-2015]

FDIC had previously issued guidance to insured institutions about identifying, accepting, and reporting brokered deposits, including a 2011 study mandated by the Dodd-Frank Act. But the agency continued to receive questions on certain deposits and issued the Financial Institutions Letter at the beginning of 2015 in response. It also included answers to some recurring questions in an FAQ updated in late December 2014.

The updated guidance aims to determine what deposits qualify as brokered and the reasoning behind classifying general prepaid reloadable cards as brokered. The January Financial Institutions Letter features a "broadly defined" characterization of a deposit broker. FDIC characterized a deposit broker as any individual who places or facilitates the placing of deposits belonging to third parties at an insured depository institution, or places the deposits at an insured depository institution "for the purpose of selling interests in those deposits" to others.

"As a result of this broad definition, a brokered deposit may be any deposit accepted by an insured depository institution from or through a third party, such as a person or company or organization other than the owner of the deposit," the FAQ read. 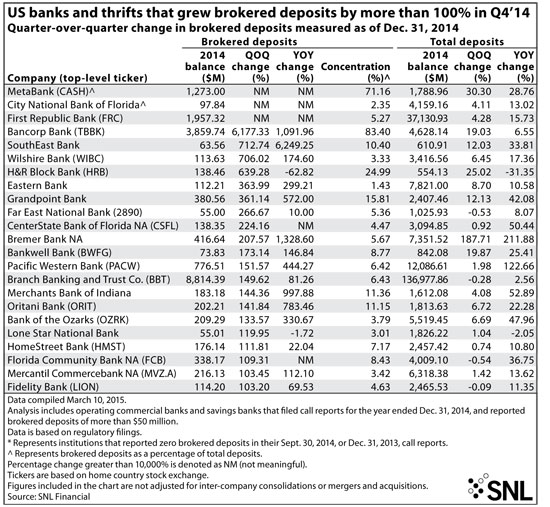 FDIC stated that a third party can be considered a deposit broker even if the party does not receive a fee or direct compensation from the bank, or if the party does not open accounts for depositors or place the funds into the accounts. Insurance agents, lawyers, or accountants that refer clients to a bank could all be considered deposit brokers and the banks receiving those funds would need to classify them as brokered.

The reclassification goes beyond a simple change in the definition of brokered deposits and could carry real costs for banks deemed riskier by regulators. FDIC applies a rate surcharge of as much as 10 basis points to the deposit insurance assessments of banks where brokered deposits exceed 10% of domestic deposits and are "not well capitalized" or "not well rated," according to risk assessment information from FDIC's website.

Brokered deposits have been viewed warily by regulators, given the role they played in the recent spate of bank failures. FDIC noted in a 2011 study on core deposits that a number of banks that failed had concentrations of commercial real estate and construction and development loans that were funded by brokered deposits.

The study found that as brokered deposit levels increase, "the probability that a bank will fail also increases." Failures at institutions with higher levels of brokered deposits were also "in general, more costly" to the deposit insurance fund.

"FDIC's statistical analyses also show that brokered deposits are an indicator of higher risk appetite. Banks that use brokered deposits have higher growth and higher subsequent nonperforming loan ratios, which are both associated with a higher probability of failure," the study's authors wrote.

CenterState acquired the deposits through a prepaid card portfolio acquired from Royal Bank of Canada in 2010 after the Canadian bank's purchase of Alabama National BanCorp. The portfolio included relationships with program managers who run rebate and incentive programs on behalf of companies and issue corporate-funded prepaid cards to customers. CenterState also has a payroll card business and a limited general reloadable portfolio, he said.

"Now those, to us, are checking accounts but it seemed like in the guidance—the preliminary read that Legal and everyone else gave us—was we needed to reclassify them as brokered, even though we see them as core," Young said. 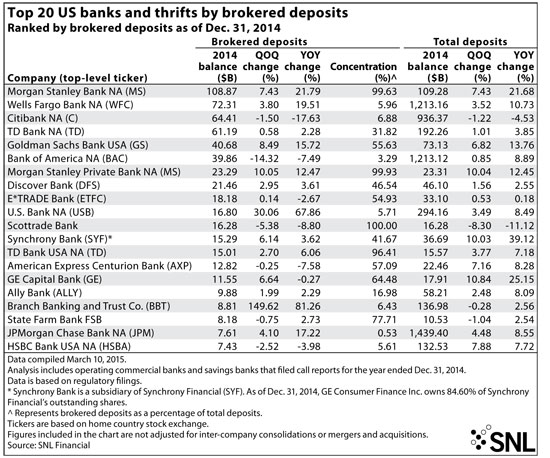 Brokered deposits now total $138.35 million at CenterState, or 4.47% of total deposits. Young said the deposits offer "nice" diversification of deposits and fee revenue. The change is a "bit of a negative" but "reasonably neutral" overall, given the limited size of the portfolio and percentage to total deposits, and the bank is not planning to make changes to the portfolio or operations, he added.

M&A pushes up the numbers too

Brokered deposits can increase substantially at banks for a number of reasons, including M&A. Brokered deposits at Boston-based Eastern Bank increased 363.99% to $112.21 million in the fourth quarter of 2014 due to its acquisition of Bedford, N.H.-based Centrix Bank & Trust.

San Diego-based BofI Holding Inc. reclassified about $80 million in prepaid card partnership balances as brokered "to be prudent," said President and CEO Gregory Garrabrants during the bank's earnings call for the last three months of 2014. Brokered deposits totaled $653.9 million at the bank for the three months ended Dec. 31, 2014, or 16.31% of deposits, compared to $414.4 million, or 12.7%, the quarter before, according to SNL data.

"I think unfortunately the application of a 'broker deposit' tag on these are really pretty … inappropriate given the fact that they are very, very stable, low-cost funds that really don't have any of the volatile characteristics that I think the purpose of the underlying statute was designed to address," he said, according to the transcript.

The clarification could have a larger effect at banks that derive more of their business from general purpose reloadable cards. The update will have a "negative impact" on the long-term value of those deposits, wrote Sterne Agee analyst Matthew Kelley in a Jan. 13 industry report. The report said the explanation was "meaningful" because banks in the prepaid business had not classified the deposits as brokered.

"There's no way around it. This document made it crystal clear that a bulk of these relationships would need to be classified as brokered, and they had not been doing that," Kelley told SNL

Meta Financial is one bank with a large general reloadable card business. The bank disclosed that it reclassified $1.3 billion, or 71.26% of its deposits, as brokered during the fourth quarter, according to an earnings release filed Jan. 29.

The bank does not anticipate an "adverse impact" on the company's statement of financial conditions or operations in the future. It also noted that if the bank would fall below well-capitalized levels, it would be prohibited from utilizing brokered deposits, including accepting, renewing or rolling over brokered deposits, without a waiver from FDIC. While the company's "maximum annual assessment impact" will be about $500,000 after tax, it expects it to be less than that, according to a March 16 company release. It anticipates taking a "catch-up expense" in March 2015 of up to $250,000 after-tax for the first two quarters of 2015.

The Bancorp Bank experienced large swings in brokered deposits over the last two years. The bank recorded 85.89% of deposits as brokered in the fourth quarter of 2012; a year later that balance had fallen to 7.46% and hit a low of 1.58% in the third quarter of 2014, according to SNL data. Brokered deposits increased to 83.4% of total deposits at the bank in the fourth quarter of 2014. Management disclosed during the bank's fourth-quarter earnings call that deposit insurance expenses increased about $1 million quarter over quarter as a result of the change.

Still, Kelley said he believes the economic value of the deposits is "quite significant." Deposits attached to a general reloadable card are longer duration and should lag markets when interest rates increase because they can be difficult to move. But investors could be off put by the concentrations and growth in brokered deposits.

"From an optics perspective, [the brokered deposits] would be less desirable, and maybe banks don't want to have a huge percentage of brokered deposits because in the public equity markets, they would get a lower multiple," he said. "People want core deposits."