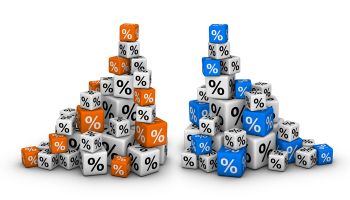 Seeing potential changes in the rate cycle and stronger loan growth on the horizon, banks decreased the relative size of their bond portfolios in the fourth quarter and worked to shorten duration.

Banks closed 2014 slightly less reliant on their bond portfolios than they had in recent past. Bank managers hoped that would be the case, with long-term rates falling back to historically low levels and many market watchers still predicting that a change in the rate cycle is likely coming in 2015.

A number of banks have opted to keep their powder dry rather than harvest gains in their bond portfolios as they invested cautiously in the market. Some banks are seeing loan growth pick up and they want to be ready to put funds to work in higher-yielding loans when opportunities arise.

Climbing into future on ladders

Dave Sweeney, the head of Chatham Investment Advisors, a registered investment adviser that provides banks with analyses and recommendations for their investment portfolios, said many banks are seeing better loan growth on the horizon and trying to keep the duration in their securities portfolio short, at less than three years. The challenge for those institutions is that they "hate the yield" that is available through that trade.

Sweeney has advised banks to ladder out funds into Treasurys and agency bullet securities with a variety of different maturities, allowing them to maintain desired liquidity while picking up some yield.

"If they forecast a need for cash in the next year or two to fund loan growth, which is a typical story, we put them into ladders," Sweeney said in a recent interview.

He added that many banks had invested in floating-rate corporate bonds to satisfy their need for yield while protecting against rising rates, but those assets were bid to really tight spreads. That was a recommendation close to 18 months ago, he said, before the pricing on those bonds rose.

The desire to protect against higher rates comes after long-term rates fell considerably in 2014, with the yield on the 10-year Treasury ending the year at 2.17%, down 35 basis points from the end of the third quarter of 2014 and down 87 basis points from the close of 2013. With rates back near historical lows, some banks said on their fourth-quarter earnings calls that they were approaching the current investment environment with caution. 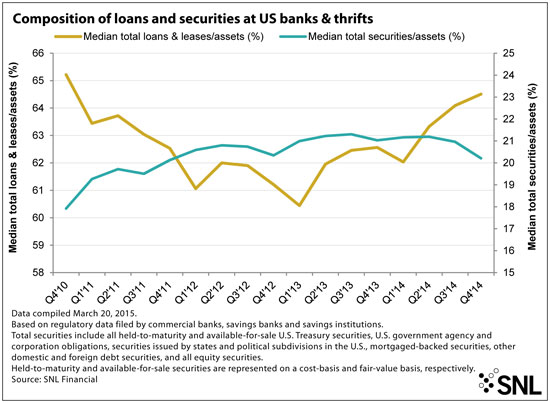 Weaning off the bond holdings

Banks looked to reduce their reliance on securities for income in 2014 after years of building those portfolios. Banks had increased their securities to 21.17% of assets through the first quarter of 2014, on a median basis, while loans fell to just 62.03% of assets at the end of the period, according to SNL data. The mix shift on bank balance sheets has largely been in place since the credit crisis erupted, with banks growing their securities books from close to 16.5% of assets at the end of 2008, while shrinking their loans from roughly 70% of assets at year-end 2008.

The trend began to shift after the first quarter of 2014, though, when securities became smaller portions of bank balance sheets. Banks' securities portfolios had fallen to 20.21% of assets at the end of fourth quarter, while loans rose to 64.51% of assets.

Banks would much prefer to put money to work by making loans instead of investing in bonds because loan portfolios have carried yields roughly 2x higher than banks' securities portfolios over the last four years, even with competition putting pressure on loan pricing.

Banks are also wary to put cash to work in the bond market given the currently low level of interest rates and the prospect that rates could potentially rise in the not-too-distant future.

Under the LCR, banks that are subject to the rule must carry "high-quality liquid assets" amounting to more than 100% of their expected net cash outflows over a 30-day period of market stress. Some of the securities that would receive no or small haircuts under the LCR consist of Treasurys and securities backed by the government-sponsored agencies and accordingly, large institutions have become much larger buyers of those assets.

Indeed, banks had previously decreased their exposure to government securities—securities issued by the Treasury, government agencies and government-sponsored agencies—in 2013 since many of the assets would see their prices come under pressure when rates rise. However, after the LCR surfaced in proposed form in October 2013, banks began building their holdings of government securities.

Banks' holdings of government securities rose to $620.68 billion in the fourth quarter from $568.83 billion in the third quarter and $428.78 billion a year earlier, but their relative size in banks' bond books held fairly steady at 22.24% of securities at the end of the fourth quarter, on a median basis, compared to 22.34% in the prior quarter and 22.33% in the year-ago period.

Since those bonds are likely to come under pressure when interest rates rise, banks have placed many of them into their held-to-maturity portfolios. Unlike available-for-sale portfolios, which continue to hold the majority of banks' securities, HTM portfolios are not subject to mark-to-market adjustments on a quarterly basis. 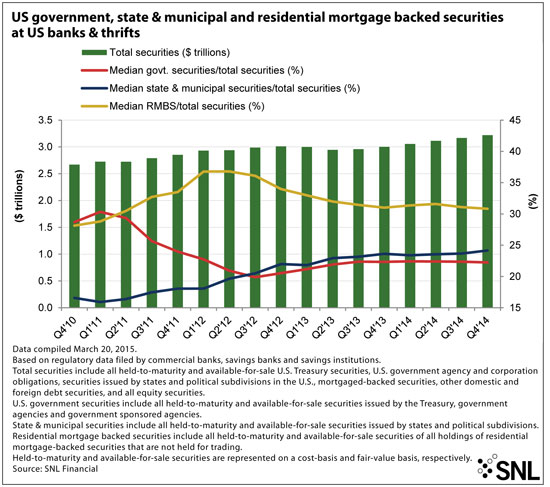 Banks increased their HTM portfolios to 20.05% of all securities at the end of the fourth quarter, on an aggregate basis, from 19.65% in the linked quarter and 16.36% a year earlier, according to SNL data. SNL data show that banks reported a 78.12% sequential increase in the amount of U.S. Treasurys held in HTM portfolios in the fourth quarter, and an increase in excess of 60% in the second and third quarters of 2014.

Banks have also placed some of the municipal securities they own in their HTM portfolios since they are longer-duration assets. Banks have increased their exposure to higher-yielding muni bonds over the last few years because they have hoped to offset some net interest margin pressure brought on by the low rate and slower growth environment.

Meanwhile, banks shrunk allocations in their investment portfolios to residential mortgage-backed securities in the second half of 2014—even though those securities still comprise very large portions of their portfolios.

RMBS could experience more significant price movements in a rising rate environment due to negative convexity from extension risk, or the risk that investors will hold below-market rate securities for longer periods of time since prepayment speeds will slow when rates rise.

The industry modestly shrunk its relative exposure to RMBS in the fourth quarter, reporting median RMBS balances equating to 30.83% of securities, compared to 31.09% at the end of the third quarter and 31.01% a year earlier, according to SNL data. 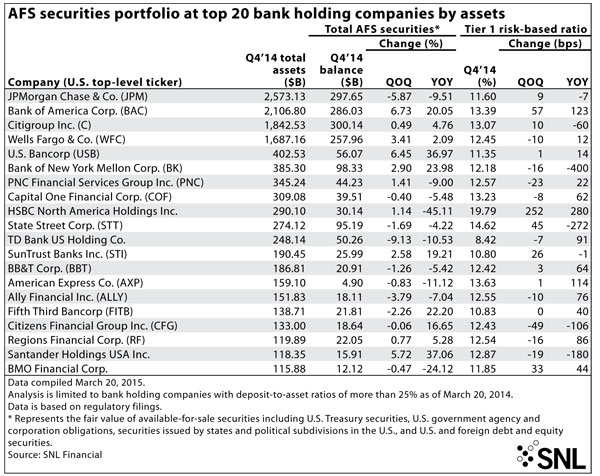