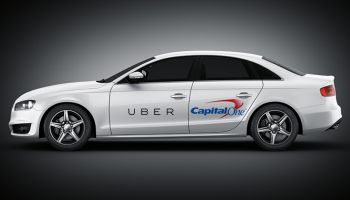 Uber, the service that lets you order a taxi, private car, or rideshare from your mobile phone, has turned the transportation industry on its head.  Now it’s partnering with a bank.

The six-year-old ride hailing service, doing business in more than 300 cities in 57 countries, is valued at more than $40 billion. Now it’s teamed up with Capital One, the fourth largest credit card issuer in the U.S. and the seventh largest bank with more than $300 billion in assets.

Partnerships between a financial services organization and a non-bank are not uncommon—Capital One announced in September that would work with Apple Pay—but the synergies between a credit card issuer/bank and a groundbreaking ride sharing service seem less obvious.

So what’s in this for Capital One?

When asked how the partnership with Uber fits into Capital One’s growth strategy, a bank’s spokesperson preferred to talk about customer service, rather than revenue growth.

“This partnership brings together the common focus that Capital One and Uber have on creating products and experiences that seamlessly deliver value and make people’s lives easier,” the spokesman said. “Both companies share the goal of saving people time and money through truly innovative products and services, and are both committed to simplicity and convenience.”

When asked whether the industry can expect similar non-bank partnership announcements from the bank, Capital One offered a hedgy, “Capital One is excited to focus on the current partnership that includes offers for all Capital One cardholders, as well as additional savings for Quicksilver customers.”

An Uber spokesperson called the Capital One partnership, umm, “rewarding” for its customers.

“We’re excited to be partnering with Capital One because they share our vision of creating simple solutions to meet important consumer needs,” said the transportation firm’s representative. “We’re looking forward to together providing a meaningful combination of savings and convenience to millions of customers.”

Capital One will market the promotion through its traditional marketing channels while Uber notes that it will rely on emails to riders, as well as social and digital marketing for promotion.

In all likelihood, the banking industry will see an increase in these types of innovative partnerships between a financial services firm and an industry disrupter as banks try to attract and retain customers with more innovative rewards programs.

Another twist on payments and transportation—in this case licensed medallion New York City yellow cabs—is the launch in 2013 of the American Express ride with points option, available in city cabs equipped with taxi TVs provided by Verifone and Creative Mobile Technologies. The latter is a combination in-ride video service equipped with payment processing ability plus global positioning system tracking and other informational features. American Express cardholders are offered the opportunity to pay for their ride with Membership Points—including tips and tolls. Eligible riders see their total Membership Rewards balance prior to deciding whether to take the option.