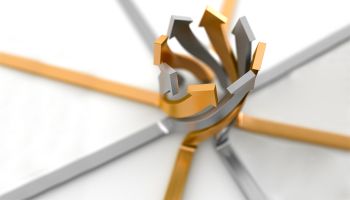 A look at SNL's bank M&A data shows that industry consolidation is continuing to pick up, with a high concentration of deals in the Midwest. More than a third of U.S. bank deals announced in the first four months of 2015 involve targets based in the Midwest, according to a recent analysis.

SNL identified whole and minority bank and thrift M&A transactions in the six SNL-defined U.S. regions, excluding U.S. territories, going back to 2005. In 2014, 288 deals were announced in the U.S., continuing the upward trend seen in the last couple of years. In 2013, there were 224 deals and in 2012 there were 220. 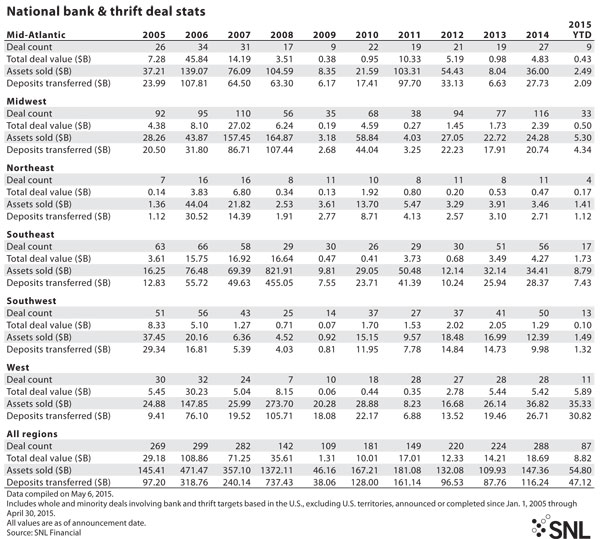 Through April 30 of this year, the Midwest region has seen the most deals, with 33 deals announced. The largest is Midland, Mich.-based Chemical Financial Corp.'s pending acquisition of Holland, Mich.-based Lake Michigan Financial Corp., which was announced Jan. 6 with a deal value of $188.1 million, or 220.8% of tangible book value. Keefe Bruyette & Woods Inc. is acting as financial adviser to the buyer, while Sandler O'Neill & Partners LP is advising the seller.

In 2014, the Midwest region saw 116 deals announced, the most of any region in SNL's analysis. Two of the largest Midwest acquisitions in 2014 were announced Dec. 15, 2014. Kansas City-based UMB Financial Corp.'s pending acquisition of Minneapolis-based Marquette Financial Cos. and Warren, Pa.-based Northwest Bancshares Inc.'s pending acquisition of Lorain, Ohio-based LNB Bancorp Inc., were valued at $182.5 million and $180.7 million, respectively.

Year-to-date, the Southeast again has been second only to the Midwest in deal volume at 17 transactions. Los Angeles-based PacWest Bancorp's pending $847.4 million acquisition of Durham, N.C.-based Square 1 Financial Inc., announced March 2 and valued at 262.5% of tangible book, is the largest pending transaction in the Southeast and the second largest in all of the U.S. Jefferies LLC is acting as financial adviser to the buyer, while Sandler O'Neill & Partners is advising the seller.

The Southeast region saw 56 deals announced in 2014. Among buyers of targets based in the Southeast region, as defined by SNL, Lafayette, La.-based IBERIABANK Corp. was the most active, with three announced deals. The largest of the three was IBERIABANK's acquisition of Orlando-based Old Florida Bancshares Inc., which closed March 31 with a deal value of $259.1 million, or 195.8% of tangible book. UBS Investment Bank acted as financial adviser to the buyer while Sandler O'Neill & Partners advised the seller. IBERIABANK, whose home state is classified as belonging to the Southwest region by SNL's regional definitions, also completed a Louisiana bank acquisition and a Texas deal in 2014. 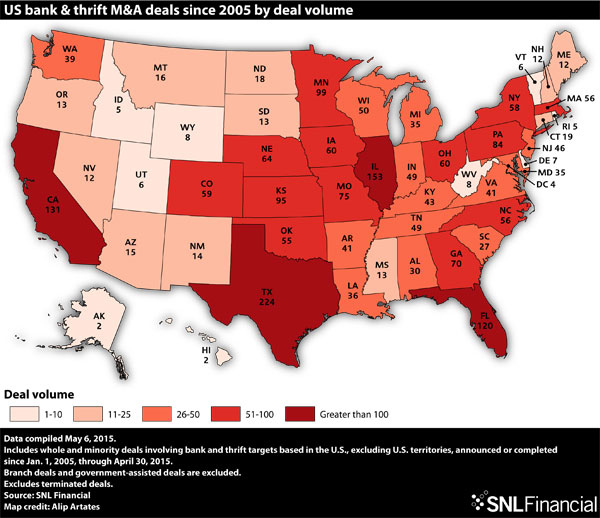 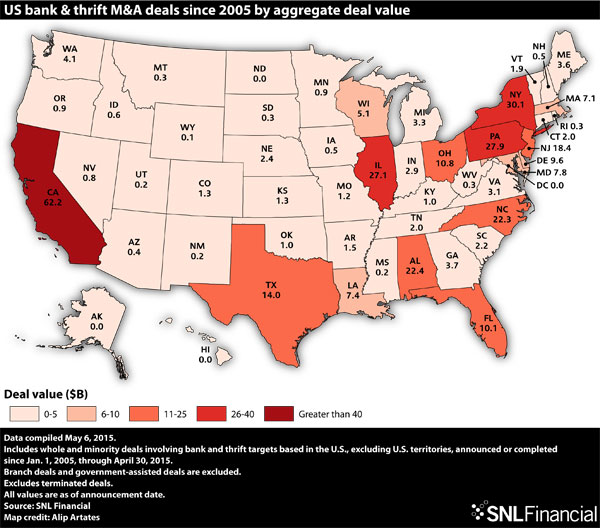 In 2015, the mid-Atlantic region has seen 9 deals announced through April 30. The largest deal announced, by both deal value and deal value/tangible book was De Witt, N.Y.-based Community Bank System Inc.'s pending acquisition of Oneida, N.Y.-based Oneida Financial Corp., announced Feb. 24, with a deal value of $142.1 million, or 202.1% of tangible book. RBC Capital Markets LLC is acting as financial adviser to the buyer while Keefe Bruyette & Woods Inc. is advising the seller.

In 2014, the mid-Atlantic region was home to the second-largest announced U.S. bank and thrift deal during that year. On Nov. 5, 2014, Winston-Salem-based BB&T Corp. announced its planned acquisition of Lititz, Pa.-based Susquehanna Bancshares Inc., for $2.50 billion, or 172% of tangible book. Deutsche Bank Securities Inc. is acting as the buyer's financial adviser, while Keefe Bruyette & Woods is advising the seller.

The Northeast has historically been quiet on the M&A front, and 2015 thus far has not shown anything different, with only four announced deals totaling $173.7 million. Camden, Maine-based Camden National Corp.'s pending acquisition of Gardiner, Maine-based SBM Financial Inc., announced March 30, is the largest Northeastern announced deal in 2015 at $137.6 million, or 160.4% of tangible book. RBC Capital Markets LLC is acting as financial adviser to the buyer while Keefe Bruyette & Woods Inc. is advising the seller. 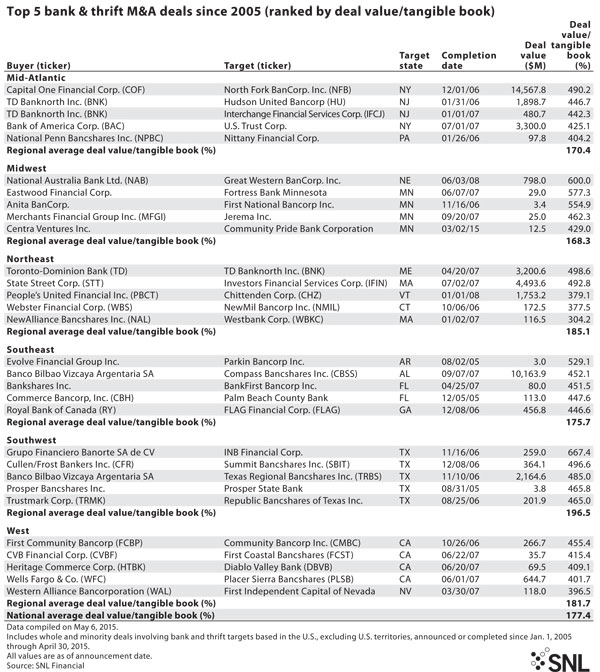 The Southwest is home to Texas, the nation's most prolific state for bank deals dating back to 2005, and accounting for more than half of all the deals in the region since the beginning of 2014, but deal values tend to fall far short of the national average. The national average for bank deal values from 2005 through April 30, 2015, is $201.4 million, but only $85.8 million in the Southwest region.

In Texas, deals are aplenty, with eight of the 13 announced deals in 2015 in the Southwest based in the Lone Star state, and one of 2015's announced deals is the most expensive. Abilene, Texas-based First Financial Bankshares Inc.'s pending acquisition of Conroe, Texas-based FBC Bancshares Inc., announced April 1, has a deal value of $59 million, or 386.9% of tangible book. By comparison, the average deal price to tangible book value for bank and thrift deals in 2015 through May 1 was 151.2%. Vining-Sparks IBG LP is acting as financial adviser to the seller.

Among the announced deals in the West to close out 2014 was Walla Walla, Wash.-based Banner Corp.'s pending acquisition of Seattle-based Starbuck Bancshares Inc., announced Nov. 5, 2014, with a deal value of $701.62, or 147.9% of tangible book. Sandler O'Neill & Partners LP is acting as financial adviser to the buyer while Jefferies LLC is advising the seller. The Jan. 1, 2015, announced acquisition of Los Angeles-based City National Corp. by Toronto-based Royal Bank of Canada for $5.33 billion, or 262.1% of tangible book, is the largest deal announced since June 2011 when McLean, Va.-based Capital One Financial Corp. acquired Wilmington, Del.-based ING Bank FSB for $9.0 billion. Royal Bank of Canada is advised by RBC Capital Markets LLC and J.P. Morgan Securities LLC while City National is being advised by Bank of America Merrill Lynch and Sandler O'Neill. 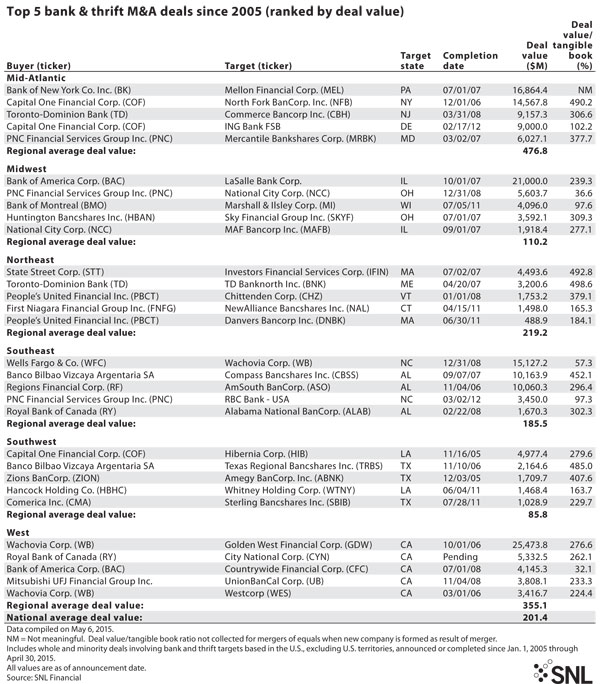