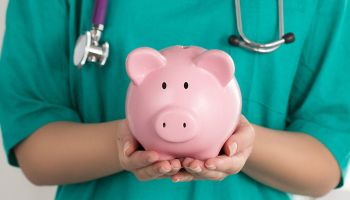 In 2015 banks began reporting their income from periodic maintenance charges on consumer deposits, revealing that institutions with health savings accounts see a relatively high amount of earnings from these fees.

Banks and thrifts above $1 billion in assets were required to begin reporting their income from periodic maintenance fees on consumer deposits in first-quarter call reports. The call report instructions define these fees in more detail as service charges levied on deposit accounts intended primarily for individuals for personal, household or family use. The instructions state that these fees are often labeled "monthly maintenance charges" and include both recurring fees that the account holder cannot avoid and nonrecurring fees, such as failure to maintain a minimum balance.

The new field was part of a larger call report rule change that also required banks above $1 billion in assets to report overdraft fees and ATM fees levied on consumer deposits. Consumer deposits, as reported in call reports, are comprised of transaction and nontransaction accounts, excluding CDs. 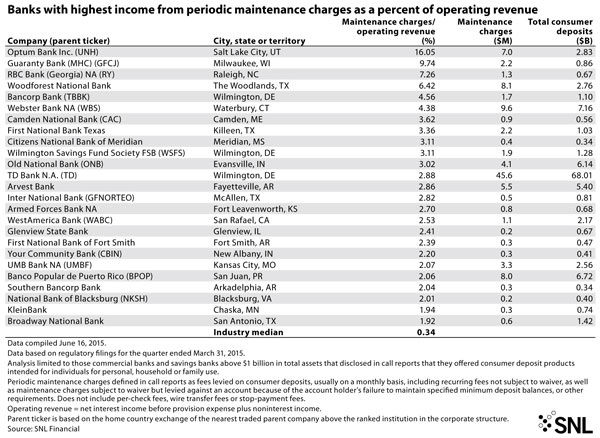 In its first-quarter call report, Optum Bank reports holding $2.83 billion in consumer nontransaction accounts, of which 99.5% are classified as "other savings." Optum Bank earned $6.97 million in periodic maintenance charges on those deposits, which equates to 16.05% of its operating revenue in the first quarter.

Wilmington, Del.-based Bancorp Bank, a unit of Bancorp Inc., ranks No. 5 on the list of banks with highest reliance on periodic maintenance charges. The bank offers health savings accounts through The Bancorp HSA.

The company said in an investor presentation filed Feb. 11 that health care deposit products make up 10.6% of its deposit products, excluding discontinued products. In its Form 10-K filed for 2013, the company said its service fees on deposits increased 40.3% during the year, "reflecting increases in the number of healthcare accounts." The company has not yet filed its Form 10-K for 2014, but in the call report for the first quarter, the bank disclosed $1.7 million in maintenance charges on consumer deposits.

Waterbury, Conn.-based Webster Bank NA, a unit of Webster Financial Corp., ranks as having the sixth-highest reliance on periodic maintenance fees. Webster Bank has an HSA division called "HSA Bank" that earned net income of $8.5 million during the first quarter. This was up from $4.2 million in the first quarter of 2014, according to Webster Financial's most recent Form 10-Q, which is filed separately from the call report. The $8.5 million in net income made up 17.1% of the bank's consolidated net income for the first quarter. Webster Bank said in its call report that it earned $9.6 million from consumer deposits maintenance charges, which equated to 4.38% of its operating revenue. 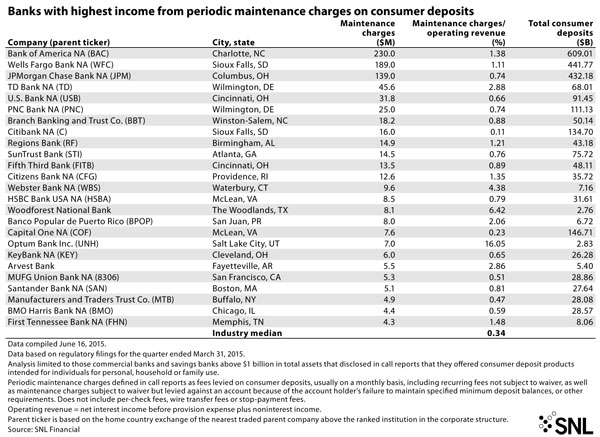