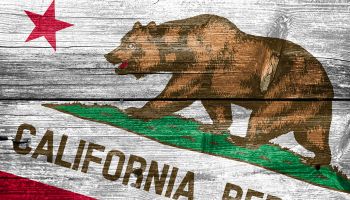 Merger-and-acquisition deal values fluctuated during the first half of 2015 in California, but activity continued at a steady clip and observers anticipate that will continue to be the case the rest of this year.

"There is a lot of excess capital out here and balance sheets are pretty clean, and that usually means buyers want to go get more deals done," James Bradshaw, a West Coast-based analyst at Bridge City Capital, told SNL.

On the seller side, many smaller banks continue to test the deal waters amid ongoing and heavy regulatory burden that has driven up costs and diverted resources away from core revenue-generating activities—namely lending—leaving these banks to pine for the greater heft they could gain by joining forces with a larger company. That, along with greater size needed to compete with larger lenders, has and likely will continue to bring more would-be sellers to the deal table, analysts say, contributing to M&A activity.

And California—particularly its growth markets in the north, such as San Francisco and Silicon Valley, and in the south, including Los Angeles and San Diego—holds special appeal for banks in the West, Bradshaw said. The large economies in the north are surging amid a technology boom, he noted, and the big Southern California markets are gaining momentum and boast diverse economies, providing potential entrants varied avenues for new growth.

"There is enormous wealth generation going on in some of these markets, and that makes the deposits in these places very attractive," Bradshaw said, noting another driver of deals. Anticipating a rise in interest rates later this year, many banks are looking to bolster their core, low-cost funding bases.

California struggled in the aftermath of the last recession, and it is hardly immune to future dips. But Bradshaw said its sheer size—it is by far the biggest state economy in the country—helps make it "a wonderful place to be long term."

Over the past four quarters, deal activity has been steady for California banks. There were four deals announced in the second quarter and five in the first. That followed five deal announcements in the final quarter of 2014 and four in the third quarter of last year, according to an SNL analysis of M&A data following the close of the second quarter. 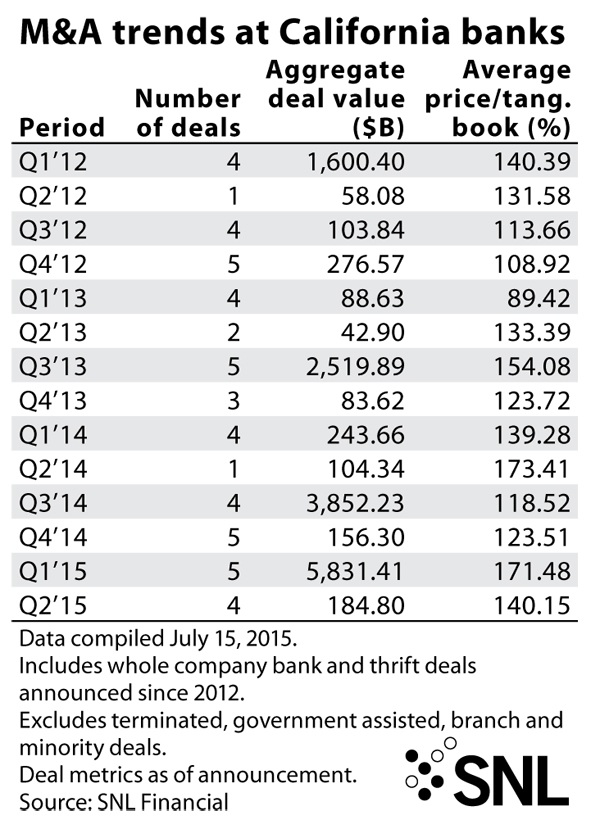 Valuations seesawed over that span, however, with aggregate deal value in the second quarter shy of $200 million, for instance, well below the nearly $6 billion recorded in the first quarter. But such fluctuations have often resulted from one relatively large deal in a given quarter skewing the overall results, analysts said.

In the first quarter, for example, Royal Bank of Canada agreed to buy City National Corp., the largest bank by assets based in Los Angeles, for more than $5 billion. Take that exceptional deal out of the mix, and the first quarter would look a lot like the second.

What has for the most part driven activity are small deals along the lines of the first acquisition announced in California in the second half of this year: Santa Barbara, Calif.-based American Riviera Bank's ($230.3 million in assets) plan to buy Santa Barbara-based Bank of Santa Barbara ($181.5 million) for a little more than $15 million.

In a presentation outlining that deal, executives from the two banks said that by combining forces and gaining size, the merged bank would boost lending limits and product offerings, allowing it to better compete with bigger banks in its region.

It also stands to gain "significant operational efficiencies and cost synergies," including on the regulatory front, where it could capitalize on its greater scale to spread costs out over a larger asset base to more easily absorb compliance costs.

That noted, one important question looking ahead on the M&A front is this: Will there be more sizable deals?

Analysts say that, in part, larger deals have been few and far between because regulators have made it known that large acquisitions will be heavily scrutinized. The most well-known example of this is M&T Bank Corp.'s drawn-out effort to buy Hudson City Bancorp Inc. That deal, announced in August 2012, has been held up multiple times because of regulators' concerns about Bank Secrecy Act and anti-money laundering compliance concerns.

But if that deal can get closed this year, as M&T executives are hoping for, and if other large deals, particularly ones in the West such as the Royal Bank of Canada-City National union, get finalized without major complications, more buyers of bigger banks could step forward, analysts say.

"It's always a good sign if you can see some other big deals come together," especially given the concerns about regulatory challenges, Matthew Clark, a Piper Jaffray analyst who covers West Coast banks, told SNL.

But, he said, even if more large buyers step into the M&A fray, he thinks small targets will continue to drive activity levels, simply because there are far more buyers able to take out small targets than there are buyers with the wherewithal to do major transactions.

"At the end of the day," Clark said, "most of the deals are still going to be at the smaller end."

Jack Chen contributed to this article.

This article originally appeared on SNL Financial's website under the title "Deal values seesaw in California, but activity holds steady"