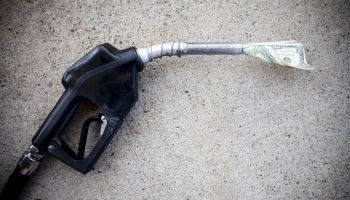 Prominent banks with lending exposure and strong market share in energy-heavy regions continued during third-quarter earnings season to express confidence in their abilities to manage through a slowdown brought on by the slump in oil prices.

But bankers and analysts say increasing attention is being paid to oil-and-gas books, with loan demand steadily lightening and credit quality issues gradually emerging. And this is likely to heighten further as banks reassess energy credit lines this fall. They will take into account a recession in oil prices that dates to the summer of 2014 as they do the seasonal assessments of energy portfolios.

"There is a cautious tone most everywhere you look" in energy regions, Jacob Thompson, a managing director at SAMCO Capital Markets in Texas, told SNL.

Thompson said that, while most large banks that handle big lines of credit to major energy companies maintain they are in good position to handle some credit deterioration—thanks to notable collateral on oil-related loans as well as customary hedging—the current redetermination work is likely to lead to higher levels of criticized assets and increased loan-loss reserves in the fourth quarter.

"It's definitely on everybody's mind," he said.

What big lenders are saying

Dallas-based Comerica Inc., among the most notable energy lenders and among the first to report earnings this month, said it continues to see new signs of weakness in its energy portfolio, resulting in both fewer loans and an increase in criticized loans in that book during the third quarter.

The bank said its energy business line declined modestly and that its energy-related loans also fell. CFO Karen Parkhill told analysts during a call to discuss earnings that 27%, or $1.1 billion, of loans related to energy were considered criticized, meaning the bank has reason to watch them more closely than typical credits. 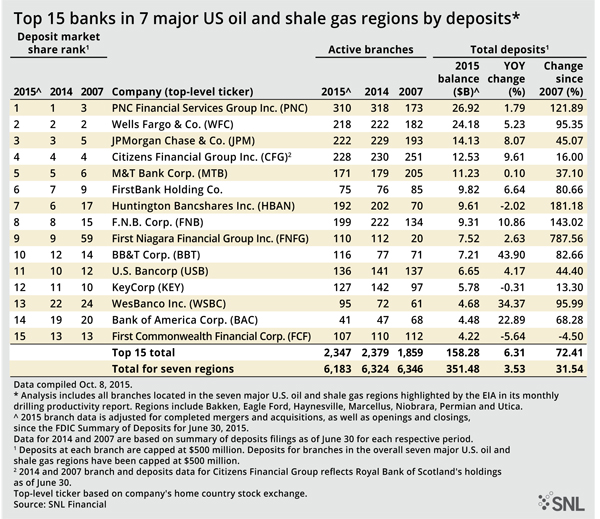 Parkhill said credit issues remain relatively minor to date, with only $126 million of nonaccruals within the bucket of criticized energy loans. That amounts to about 3% of its total energy loans, she said, and the figure is up a modest $7 million from the second quarter. Nevertheless, conditions within the energy book are gradually sliding.

Parkhill said the fall redetermination process had only recently gotten underway for the bank's exploration and production customers, a group that makes up a little more than two-thirds of Comerica's energy business. Amid the low oil prices, she said, customers are reducing rig counts and, by extension, leveling off borrowing plans. The redetermination process should shine a light on any new credit quality issues.

Evercore ISI analyst John Pancari noted Comerica's general optimism around its ability to manage the energy challenges. But as he and his colleagues await the results of the redetermination process, he added, "we remain a bit skeptical."

Other banks with notable footprints in energy-reliant regions also expressed both confidence in their abilities to manage through the energy downturn and concern about its effects on certain aspects of their lending operations.

PNC Financial Services Group Inc., whose businesses span the Utica and Marcellus shale regions, said that it had about $2.6 billion in energy outstandings at the close of the third quarter. That was only about 2% of its total commercial loan book. But among those energy loans, it currently has extra eyes on about 10% of them, CFO Robert Reilly told analysts during the company's earnings call this month.

"We did experience some performance deterioration in the quarter and as a result incurred some elevated charge-offs," Reilly said. "During the third quarter, we increased our reserves to reflect the incremental impact of lower oil and gas prices. And going forward, we continue to actively monitor the portfolio for additional changes." 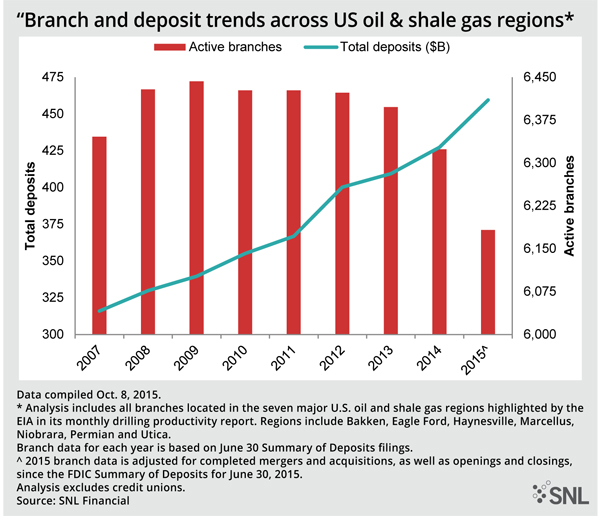 Bank of America Corp., which is spread across several energy regions, said it increased slightly its reserve for criticized exposures, driven by downgrades in its oil-and-gas business. But Chairman, President, and CEO Brian Moynihan told analysts during a call to discuss earnings that major banks such as BofA are well-hedged and deal largely with the most coveted credits, working with large corporate clients whose loans are secured by assets.

To be sure, if oil prices remain low for substantially longer—they have hovered in the $40 to $50 per barrel range, down substantially from mid-2014, when they topped $100—secondary issues could bubble up and hurt other business lines. This, observers say, could sting both large banks and smaller ones that cater to businesses that feed off of the big energy companies' employment bases.

Community lenders that finance everything from local businesses to transportation to construction work, for instance, could start to feel pain if big oil companies continue to struggle, lay off more workers and crimp local economies.

"That's where you start to see some real issues," SAMCO Capital's Thompson said.

"I do think the concern is largely on the potential secondary impacts," he told SNL. "It has not shown up materially yet," but after the fall redetermination period, "we could start to see more issues. This could be more of a fourth-quarter story." 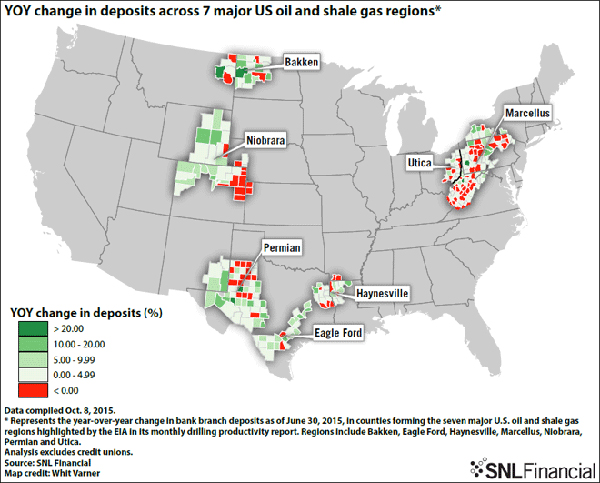 This article originally appeared on SNL Financial’s website under the title, "Focus sharpens on banks with oil-and-gas exposure"