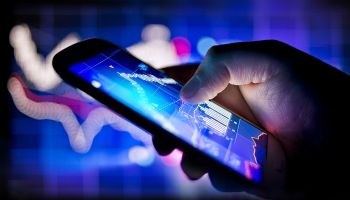 Even those institutions with assets of less than $500 million have leapt into the fray, and in 2014 78% of banks and credit unions were supporting use of a smart phone to check an account balance, to transfer funds between accounts, or to find ATMs. (The survey, with respondents chiefly falling into that size range, was performed for the district banks in Atlanta, Boston, Dallas, Minneapolis, and Richmond.) 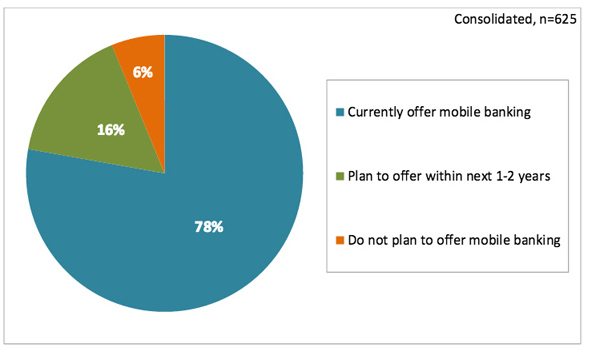 Keeping up with banks, ahead of many consumers

The survey said banks and credit unions offered mobile banking basics and beyond, catching up to similar offerings by larger counterparts.

Demand for these services at smaller banks has remained selective, however,  with only 4% of financial institutions saying that a majority of its customers were now active users. (About half said that a 5%-20% user base was the norm.)

The mismatch is notable and seems odd given all the buzz around the channel and given that U.S. smart phone penetration for those 13 and over in the U.S. has been steadily rising in the years between 2012 and 2015 from 43% to 75.8% respectively. (Google’s Android leads in terms of marketshare with 52% and Apple has the next largest chunk at 42%.) Still, figures about mobile phone ownership—quoted here from comScore MobiLens reports—signal a potential market for banking industry involvement, the Fed banks’ study indicated.

Survey findings suggested that banks remain in the familiar position of needing to respond to non-bank threats on the development side (doing more with payments), while simultaneously needing to get their customers excited about the last “great new thing” to further spur adoption. Moreover, banks need to promote the service despite understandable fears about security.

Deep look at the market

Beyond seeking out which banks were advancing mobile efforts, the email survey looked for answers regarding the types of services offered or planned in banking and payments, platforms supported, perceived risks and barriers to service development and plans for the future, including plans around payments.

• … and newbies. Minneapolis respondents are newer to mobile banking than those in other districts, so a higher percentage  of those institutions are planning to implement mobile banking within the next one to two years.

• What’s on the mobile? Five basic services are offered by about 75% of the respondents: billpay; checking balances; transferring funds; viewing statements and transaction history; and offering a ATM\branch locator.

• Mobilely mobilized. Mobile enrollment and single log-in functions are close to being common with nearly three quarters of participants offering single log-in authentication for online and mobile account access. These institutions also support the use of the customer’s mobile device to sign up for services.

• “And that’s not all!” About half of the respondents offered additional services that included change of address (69%), personal financial management (61%), and check reordering (60%).

• Mobile approaches of choice. In terms of interest in mobile platforms, that is, how functionality is delivered, 57% on average were interested in using all three (mobile app, mobile website, and SMS text) while thirty-six percent favored use of mobile apps to deliver services.

• Don’t forget the tablets. Almost 500 banks indicated that they planned to support apps on tablets, and 25% said they would support Kindle as a platform for those applications. 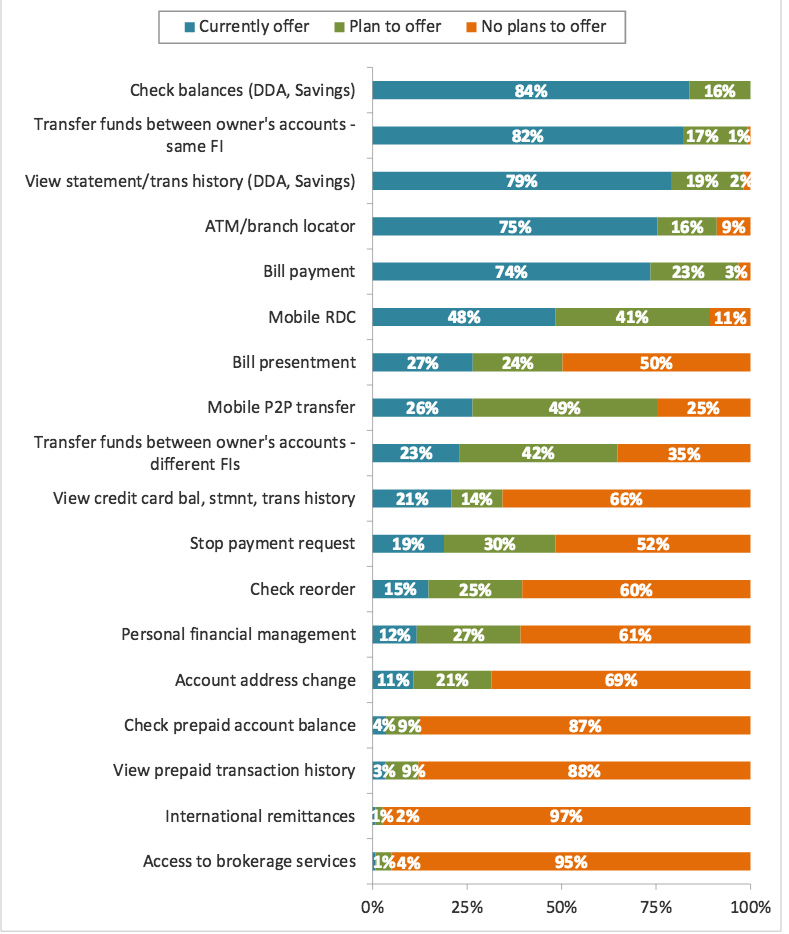 The survey report concluded that mobile banking, which includes using the phone to view and transfer balances and pay bills, may be necessary to meet the needs of customers, but it’s not sufficient.

Payments, touted for the last decade as the “next new must have” for mobile, is grinding back to life after relative quiet with Apple and its ApplePay solution and other non-bank offerings.

At the time of the survey, in the third quarter of 2014, 10% of banks were offering mobile payment services and 47% were planning to offer payment services within two years, which the Fed bank analysts thought promising.

The survey notes that the last two years have shown heightened interest from card networks and other stakeholders and a huge array of product options. (Based on past experience, many may flash and burn out before becoming true household names).

Partnering with third-party providers was selected by 82% of financial institutions while partnering with a retailer was the option least selected. Partnering with any wallet provider— whether digital or near field communication—wasn’t popular either, though the report pointed out that the status quo with that option may change when the MCX merchant consortium launches it CurrentC mobile wallet. During the Money 20/20 conference earlier this year the consortium announced that it was expanding its Ohio pilot to 200 stores. (See “Noteworthy at Money 20/20”)