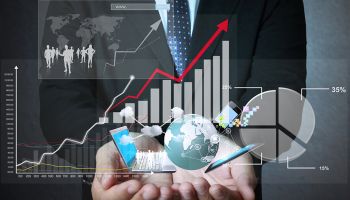 Banking is a multi-channel business. So why would you stop thinking in terms of channels? Because customers don’t think about channels. They just want a good experience, every time, anytime.

Robb Gaynor and Danny Piangerelli, two of the three founders of mobile banking innovator Malauzai Software, Inc., find bankers are starting to talk more about the actual data and how it is presented, and less about where it appears.

“It really doesn’t matter what channel their customers arrive at, bankers just want the data to present itself [well] to their customers,” said Piangerelli, chief technology officer. Banking Exchange Editor & Publisher Bill Streeter, spoke with Piangerelli and Gaynor at an industry conference this fall.

Malauzai, which started up in 2009, configures its applications in “basically five screen designs, from extra-small to extra-large,” said Gaynor, chief product officer. That allows the firm’s designers to provide banking functionality on an Apple Watch, a smartphone, tablet, laptop/desktop—all the way up to the large screen on an Apple TV. The company is in conversation with Tesla Motors to provide mobile banking for the screen on its high-end electric cars.

Internet banking platforms have become legacy technology, said Gaynor—dated, but still widely used. Mobile banking, by contrast, has been on a growth tear. In recent research, Malauzai found that about 30% of mobile customers solely bank mobiley—they no longer use internet banking.

Gaynor doesn’t see that portending a retreat from internet banking. However, he does feel that for most financial institutions, internet banking growth will be flat. One reason is that in most cases it sports a 10-20-year-old user interface, often with unnecessary complexity. New development efforts have been targeted for mobile. But now, the simplicity and functionality required by mobile is being applied to the desktop.

“Once you can do everything you can do on mobile on the desktop, and vice versa,” said Gaynor, “we’ll be at full parity.”

He believes some of those mobile-only respondents will go back to using internet banking. “Clients, members, customers tend not to ‘single-channel’ all the time,” said Gaynor. They like an alternative and will occasionally use a call center, a branch, or the internet. “They choose to use mobile more,” he stated, “because it’s easier and more accessible and does everything the internet does, but I don’t think internet banking is going away.” One thing is certain, he added, internet banking will look like mobile—a lot less cluttered.

Malauzai’s own internet banking product incorporates the same look and feel as the company’s mobile product, even using what appear to be mobile apps, even though technically they’re not. The company provides both platforms—mobile and internet—for one price, whereas most banks and credit unions, Gaynor said, pay twice, even when the products are from the same vendor.

Acquisition in the cards?

“We are a complementary mobile offering to [D+H’s] Cavion Mobile,” said Gaynor. “To date we have 40 mutual clients that have been signed. We did our first D+H implementation in 57 days.”

Asked if the deal foreshadows an acquisition—a common scenario in the bank technology world—Gaynor replied: “The reality is [an acquisition] ultimately at some point probably is going to happen. The question is when? Our immediate strategy is more focused on how large we want to grow and what capital we need to drive it. We can reach a thousand customers without selling ourselves. We’re at 400 right now.”

The privately held Malauzai’s lead investor is Wellington Management Company, second-largest money manager after Blackrock, which, said Gaynor, “gives us flexibility because we don’t have to sell.”

Smart watch with a voice

Part of the reason Malauzai had a solution ready for the Apple Watch rollout last spring was to generate buzz—not only for itself, but for the eight customers it set up to be ready on launch day. (The vendor even gave the banks and credit unions a public relations template to use. The plan worked. The institutions made it onto television and received national print media coverage.)

The reality is that there aren’t that many people wearing Apple watches yet, so usage of the Malauzai smart watch feature is very light, Gaynor acknowledged, but he feels the effort was worth it. Creating the application didn’t require many resources, he noted—basically a couple of engineers “cutting code.” The smart watch application allows banks to provide balances, transaction history, contact information, branch locations, and more.

Beyond the publicity, however, the effort yielded another benefit, said Gaynor. Apple for the first time opened up its Siri voice API (application programming interface), “so we got to learn about that. We didn’t use it, but now we know more about the Siri API, which is going to be opened up on the phone and the iPad,” probably in 2016.

Gaynor and Piangerelli see big potential for voice activation in mobile banking. Piangerelli pointed out that the new Apple TV is voice activated. You search for things by voice, not by keyboard.

For banking, the ability to have your balance read back to you rather than looking at it, or to transfer money by speaking commands is all coming, Gaynor said, with Siri on the iPhone platform, and using other technology on Android devices. Possibly even for the desktop at some point.

He predicted that by fall of 2016 the industry will see voice response on mobile units, because that technology is relatively easy. Voice input is harder, requiring the ability to recognize a person’s speech for information such as bank balances.

With the mass acceptance of touch identification on smartphones, biometrics has become mainstream, yet going beyond that, said Gaynor, is still a question mark. There remains a “freakiness” to eye scanning and other biometric techniques, he said.

One area of authentication that he said Malauzai is paying close attention to is behavioral biometrics. Piangerelli described what behavioral means in the context of biometrics:

There are a couple of companies doing this, Gaynor noted, one being Guardian Analytics. “It’s a really non-obtrusive way of doing biometric identification,” he said. What Guardian does is look for anomalies, Gaynor explained. If they don’t recognize you immediately through your behavior, they don’t stop your usage, they flag it, and then there’s a “step up” in the process. The financial institution involved would ask the person to further authenticate.