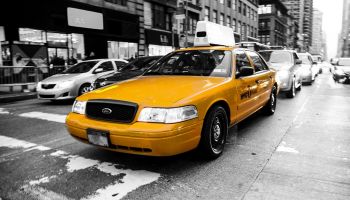 Lending on tax medallions as collateral was once almost foolproof. But then banking and the traditional cab industry faced a double disruption, and now both industries face the need to revise their business models.

In 2011, Uber launched its mobile application that enabled people to use smartphones to find rides in New York City and other metropolitan areas. Unlike taxicabs, Uber drivers drive their own cars. Uber is now available in more than 150 cities nationwide and 65 countries worldwide. Similar companies such as Lyft and Sidecar are currently fighting for a piece of the ride-sharing market.

The ride-sharing mobile app proved an innovative concept that provided consumers with a viable alternative to hailing taxis in bad weather or in underserved areas, and in some instances, at lower cost. However, ride-sharing services have also resulted in the steady decline in value of the taxi medallion, which gives its holder the exclusive right to operate a taxi and to accept physical hails from would-be passengers.

(A medallion, typically a metal plate or a piece of paper attached to a vehicle, is issued by a municipality. It represents the legal right to operate the vehicle as a taxi. Typically a medallion holder can lease this right to others.)

The deterioration in medallion values—caused by faltering demand and income-producing potential—has caused lenders, taxi associations, and related entities to file lawsuits across the country against city transportation regulators to enforce taxi regulations against ride-sharing companies. To date, at least one credit union with a lending portfolio that relied heavily on taxi medallion loans has folded.

Will the taxi industry survive?

And is there a way for lenders to safely engage in taxi medallion financing?

At around the same time that Uber launched its ride-sharing app in 2011, at least two taxi medallions in New York City were sold at a record high purchase price of $1 million apiece.

Put another way, the value of the medallion has fallen anywhere from 15% to 42.5% since the advent of ride-sharing services. In addition, certain taxi medallions that went on sale in 2014 continue to languish on the market, indicating that the secondary market for medallions is also experiencing a downturn.

Several lenders have raised the alarm regarding the realistic possibility that medallion financing will also collapse. Several credit unions have alleged in a lawsuit1 against New York City taxi authorities that:

“[A]s the market value of the medallion continues to drop, so too does [the] ability to make new loans to secure them … as medallion financing evaporates, even performing medallion loans that contemplate significant end-of-term balloon payments, as most of them do, cannot be refinanced or repaid by the borrower … as those loans start to fail, a cascade of foreclosures is certain to follow.” [Emphasis added]

In part, the credit unions’ prediction has come true.

On Sept. 18, 2015, the New York Department of Financial Services seized control of Montauk Credit Union for operating in an “unsafe and unsound” manner. At the time, Montauk held a security interest in 142 taxicab medallions as collateral for 108 medallion loans totaling approximately $50 million.

Other lenders are experiencing growing delinquencies in their medallion loans. For example, in 2014, Medallion Financial Corp. reported that none of its medallion loans (including loans made by its wholly owned subsidiary, Medallion Bank) were 90 days past due. However, the parent company’s 2015 quarterly financial reports reflect that the number of taxi medallion loans becoming 90-days-past-due grew significantly during each quarter: (a) .3% in the first quarter; (b) 1.3% in the second quarter; and (c) 2.5% in the third quarter.

The growing percentage of past-due loans is approaching levels not seen since Medallion Financial’s first ten years of being a public company.

Too little, too late?

In spite of the decrease in medallion values and related lending woes, those in the taxicab industry are striving to keep up with the times.

For example, some have been using mobile apps of their own. In 2015, taxicab mobile apps such as Arro and Way2Ride (in NYC); Hail A Cab (Austin, Houston, and other Texas cities); and Ride Genie (Las Vegas) were launched in an effort to level the e-hail playing field with ride-sharing companies. Whether or not these start-up apps are ultimately successful remains to be seen.

Also important to note is that business boomed early on for Uber and other ride-sharing service companies in large part due to the lack of regulations applicable to these companies. The pendulum appears to be swinging the other way, now, as more states, such as Illinois and Washington, have passed legislation (effective in the summer of 2015) requiring ride-sharing companies to comply with insurance coverage, safety, driver, and operational regulations.

These regulations, as well as laws at the regional and local level, could slow the rapid growth of ride-sharing service companies in terms of driver supply and net income generated.

Based on current market conditions, it is obviously not the best time to jump into taxi medallion lending. However, for those lenders whose loan portfolios already hold taxi medallion loans or those who are simply optimistic that the market will rebound, the following are some best practices or tips. They were gleaned from current taxi medallion lenders, as well as from the National Credit Union Association’s (NCUA) April 1, 2014 Supervisory Letter on taxi medallion loans:

1. Diversify. A balanced portfolio could help a lender to survive these lean years in the taxi medallion lending industry. For example, although Medallion Financial Corp. is experiencing a growing percentage of delinquent medallion loans, the company remains optimistic regarding its overall financial health as a result of a diversified portfolio.

Andrew Murstein, president of Medallion Financial, stated: “[W]hile taxi medallion lending continues to have virtually zero losses and remains profitable, the majority of our earnings now arise from non-taxi related loan products, primarily from our consumer lending businesses, which was responsible for 75% of our earnings in the 2015 nine months.”

Medallion Financial has continued to increase its consumer loans; in 2014, consumer loans made up 36% of the company’s portfolio, which increased to 41% by the third quarter of 2015. Conversely, the company has decreased its taxi medallion loans from 59% in 2014 to 54% in 20152.

Only time will tell, however, whether or not portfolio diversification will successfully stave off or balance losses that may occur in the taxi medallion market.

Thus, scrutinize these relationships in order to understand which parties should provide personal guaranties or additional collateral. Consider requiring those additional repayment sources as part of the overall financing whenever feasible.

However, for more complex borrowing relationships (e.g., the borrower or principals have multiple operations, or the operations are interrelated), a lender should require borrowers and principals, depending on the level of risk associated with the relationship, to provide either:

a. Generally accepted accounting principles (GAAP) financial statements subject to a review engagement by a licensed CPA, or;

b. GAAP financial statements subject to an audit performed under generally accepted auditing standards (GAAS) by a licensed, independent CPA. For more complex relationships (such as vertically integrated or large horizontal relationships, such as principals owning many entities), credit unions are expected to enhance their due diligence by obtaining high-quality, consolidated GAAP financial statements, including the consolidating statement, and completing global risk, financial and cash flow analyses of the overall borrower and principal relationship.

Also consider requiring borrowers to submit financial information on a regular or increased basis in order to assess the current financial condition of the borrower.

4. Debt service ability. NCUA’s recommended debt service coverage ratio to qualify a borrower for a taxi medallion loan is 1.25:1 times (1.25X).3 This ratio indicates that a borrower is generating enough income to pay all obligations, and should have enough excess cash flow to build a capital cushion to protect against unforeseen adversity. A lender should document its analysis of a borrower’s ability to repay and base the analysis on actual cash flows from reliable information sources.

A lender should constantly monitor the market and, in more volatile conditions, consider shortening amortization periods. With respect to cash-out refinancing, identify the purpose of the refi, and control and track loan proceed disbursements to make sure that such funds are used for the agreed-upon purpose.

6. Cull out weaker loans. Review the performance of all loans and related loan terms. Even if a loan is currently performing, assess the risk of default based on current financial information/data, and consult with your compliance risk and legal teams to determine whether grounds exist to call the loan.

While opinions about the ultimate fate of the taxi industry differ greatly, most people can agree that the medallion lending industry will never be the same.

Even with the taxi industry fighting back and more regulatory control asserted over ride-sharing service companies, the value of the taxi medallion is unlikely to revert back to historic highs.

Lenders should use caution (and best practices) when originating new medallion loans or managing existing ones in order to mitigate as much risk as possible.

2As of the date of this article, Medallion Financial’s annual and fourth quarter results for 2015 were not yet available.

3A debt service coverage ratio (DSCR) is the amount of cash available from operations to meet annual interest and principal payments on all borrower debt and to pay unfunded capital expenses.