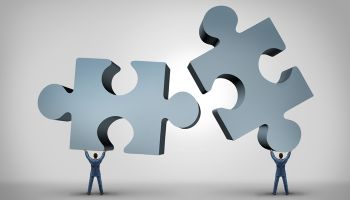 A rocky stock market has dinged some would-be bank buyers' currencies and a collapse in oil prices has called into question the appeal of targets in energy-heavy markets.

But the drivers of steady community bank M&A in 2015—low interest rates, burdensome regulation, lofty technology cost pressures, and uncertain earnings growth prospects—continue to motivate lenders to pursue scale and, as such, bankers and analysts anticipate buyers and sellers will continue to come together in 2016.

M&A by the numbers

So far this year, M&A activity has in fact held up. Through Feb. 19, there were 30 whole bank and thrift deals announced in 2016, roughly on par with the 34 announced during the same period in 2015, and the 32 announced in 2014, according to an analysis by S&P Global Market Intelligence.

The pace of bank M&A was close to the 2015 level, which was strong relative to previous years. Aggregate deal value through Feb. 19 of this year reached $5.74 billion, compared with $6.08 billion a year earlier and $2.08 billion in 2014, according to the analysis.

Pricing on small-bank deals has held relatively steady in the face of recent market pressures. Twenty-five bank deals were announced in the year through Feb. 19 involving targets with less than $1 billion in assets. The median price-to-tangible book value on those transactions was 118.9%, compared to 130.3% and 121.3% during the same periods of 2015 and 2014, respectively. 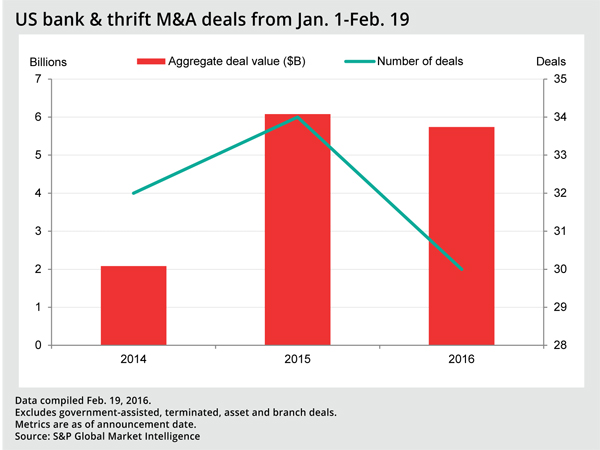 The vast majority of deals have come in the community bank space in recent years, with buyers looking to gain size to more easily absorb the high regulatory costs that have emerged since the 2010 Dodd-Frank Act.

Acquisitive banks also are eager to get bigger in order to more easily invest in technology initiatives—both to provide online and mobile services that customers increasingly are demanding and to guard against the constant threat of cyberattacks. Buyers also are looking to dig deeper into their footprints to gain market share or to spread their reach into new markets to expand revenue streams at a time when traditional interest income is difficult to grow substantially because of historically low interest rates.

Sellers, meanwhile, are most often small banks struggling under the weight of regulatory burden and intense competition from larger players. By joining forces with larger banks, they bring to their customers more services and greater resources, and if all goes well, mesh with partners better equipped to grow and bolster stock prices long term, rewarding shareholders.

"The constant drumbeat of 'Size Matters' is really starting to sink in with a lot of people," William Wagner, an investment banker at Raymond James, said in an interview.

Market’s troubles not reflected yet

All of that noted, Wagner cautioned that most deals announced so far in 2016 were set in motion in 2015, prior to the stock market swoon of January.

Through Feb. 19, the SNL U.S. Bank Index was down more than 15% on the year. That decline has bruised the shares of many likely buyers, affecting their ability to pay the premiums that sellers are eager to fetch via stock or cash-and-stock deals, and because of that, Wagner said some sellers are temporarily backing away from the deal table early this year. That could affect deal announcement levels as the industry heads into the second quarter.

Stocks are down this year amid broad concern in the market about global economic trouble—the threat of recession in parts of Europe and in emerging markets, as well as a slowdown in China—eventually infecting the U.S. economy. And, domestically, investors are worried that chronically low oil prices (prices are off about 70% from mid-2014) could begin to drag on not just energy companies but large regional economies such as the Texas economy.

"We haven't seen major areas of serious weakness develop yet, but the market is definitely concerned," Piper Jaffray analyst Brett Rabatin, who covers Texas banks, said in an interview. Against that backdrop, he said, "I think M&A is pretty much off the table in Texas right now," as buyers grow cautious about asset quality of targets. And Texas is large enough to have an impact on national deal data.

But Rabatin agrees with Wagner that the drivers of M&A in most areas of the country remain in place. "I think we will continue to see more across much of the rest of the country," Rabatin said.

Watching for the bounceback

Wagner said there is reason to think stocks will rebound in coming months.

He is among those who think the low gasoline prices that consumers are enjoying amid the oil recession are beginning to lift consumer confidence and spending. That in turn is likely to bolster economic data because two-thirds of the U.S. economy is driven by consumer spending. Positive reads on the economy would likely ease investor fears about oil prices and make room for a market rebound.

"I'm optimistic that there are good signs," Wagner said in the wake of recent U.S. Commerce Department data that showed retail spending was up the past two months.

Should stocks bounce back, he added, sellers that may have put talks on hold would likely resume discussions in earnest given the entrenched catalysts.

"Hopefully, the market rebounds quickly and we'll get back to where we were," Wagner said.

He added that buyers continue to be on the lookout for deals, hungry to expand and mindful that many small banks are wrestling with expense and growth threats.

Case in point: Michigan City, Ind.-based Horizon Bancorp, which earlier this month announced a plan to buy Mentone, Ind.-based Kosciusko Financial Inc. in a cash-and-stock deal. Horizon has been active on the M&A front over the last few years and expects to remain so, saying it can manage two acquisitions per year.

"There are opportunities out there as the smaller banks are really struggling with the regulatory burden" and other challenges, Horizon Chairman and CEO Craig Dwight said in an interview after announcing the Kosciusko deal.

Kevin Dobbs is a senior reporter and columnist. The views and opinions expressed in this piece represent those of the author or his sources and not necessarily those of S&P Global Market Intelligence. Follow on Twitter @Kevin1Dobbs  Jack Chen contributed to this article.

This article originally appeared on SNL Financial’s website under the title, "Despite turbulence, small-bank M&A activity holds up so far in '16"