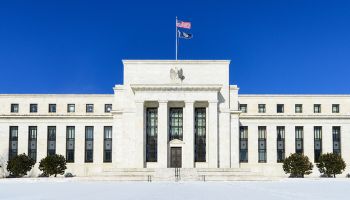 Federal Reserve Board Governor Lael Brainard didn't exactly say "Whoa there! Hold everything!" to an audience at a blockchain conference. But she made it clear that the central bank intends to be very involved in where distributed ledger technology goes in the U.S.

There’s an old saying among safety and soundness examiners that regulators are the people who are supposed to take away the punchbowl before the party really gets going . One could argue that the Federal Reserve may be signaling that it wants to look over the shoulder of those mixing the punch out in the kitchen, when it comes to adoption of blockchain and related technology in this country.

In a mid-April speech, Fed Governor Lael Brainard said that the daily operations of markets, and the clearing and settlement functions behind the scenes that make them work properly, ultimately depend on trust and confidence.

“Market participants trust that clearing and settlement functions and institutions will work properly every day,” said Brainard in a speech before the Institute of International Finance Blockchain Roundtable. “Confidence has built over time that when market participants trade, accurate and timely clearing and settlement will follow. Any disruption to this confidence comes at great cost to market integrity and financial stability. This is a matter of fundamental public interest.”

While the implementers of new tech should be the first ones to ask the hard questions, Brainard said that “regulators also should seek to analyze the implications of technology developments through constructive and timely engagement.”

In a highly detailed speech, she made it clear that the Fed intends to be involved in the nitty gritty of adoption of blockchain and related technology in the U.S. financial services system.

Not all of one flavor

Brainard said that while the Fed wants to facilitate innovation where it can yield benefits, the central bank must ensure that risks are thoroughly comprehended.

“That orientation may have different implications in the arena of consumer and small business finance, for instance,” said Brainard, “as compared with payment, clearing, and settlement in the wholesale financial markets.”

In the speech Brainard made it clear that it is possible to have very different views on blockchain implementation depending on the way users propose to apply it, and what technology is currently applied to each aspect of financial services.

Most of Brainard’s speech concentrated on the pros and cons of distributed ledger technologies like blockchain, and how they would fit into the existing payments, clearing, and settlement framework and where they would supplant it—all at a high level. A large section of the speech traced the history of such systems, vaguely reminiscent of former Fed Chairman Alan Greenspan’s famous speech texts. Markets so hung on Greenspan’s words that he took to speaking lengthily about transactional generalities.

Where to go on the blockchain path?

Brainard went beyond the history lessons. She looked at different ways of adopting new approaches as well as broader implications. At one point, she likened bitcoin and similar digital currencies relying on distributed ledger technology to a physical cash transaction. The similarity lies in the ability to transact without intermediaries or counterparties.

Brainard noted that blockchain technology has the potential to bring very disruptive change, but added that such transitions have occurred before.

“Today, the possible development and application of distributed ledger technology has raised questions about potentially far reaching changes to multilateral clearinghouses and the roles of financial institutions as intermediaries in trading, clearing, and settlement for their clients,” said Brainard.

In the extreme, she continued, distributed ledger technologies are seen as enabling a much larger universe of financial players to transact directly with other financial actors. They would be able to “exchange assets versus funds,” she said, that is, “to ‘clear’ and settle the underlying transactions virtually instantaneously without the help of intermediaries both within and across borders.”

“This dramatic reduction in frictions would be facilitated by distributed ledgers shared across various networks of financial actors that would keep a complete and accurate record of all transactions,” she explained, “and meet appropriate goals for transparency, privacy, and security.”

The benefits of distributed ledger technology would vary according to the aspect of financial services it was applied to. Brainard said that in cross border payments it could provide faster and cheaper services than conventional correspondent banking arrangements. In securities clearing and settlement, she said, tasks such as reconciliation might be eliminated by adoption of blockchain technology that would enable sharing of a common master record.

Brainard also looked at the other side of the question, the risks and the costs of adopting new technology. She also pointed out that “realizing the full potential of distributed ledger technologies could take many years.”

“A major threshold question for the adoption of distributed ledger technology within and between groups of firms engaging in particular types of transactions is whether the advantages outweigh the costs of replacing legacy systems,” Brainard said.

In the area of clearing, the Fed governor traced three scenarios: cases where it would take years before the new technology would be adopted sufficiently to make an impact; cases where current systems are so old that adoption would not be as difficult and payoffs potentially sooner; and a middle ground. In the latter, she said, “no doubt much will depend not only on costs but also on a host of business, technical, security, and other issues.”

In addressing the risk aspects of adopting blockchain, Brainard concluded that “new technologies must be robust in practice, not just theory, to attacks on security, and must be able to maintain appropriate confidentiality for records and data.”

On the other hand, she noted, the technology might assist in Bank Secrecy Act/Anti-money laundering compliance.

The spectre of unintended consequences also looms over the new technology. Brainard noted that distributed ledgers often involve shared databases. She pointed out that much of the experimentation with this technology thus far has been among “permissioned” parties, who are the only ones allowed to validate transactions. Access to the ledger may still be permitted to the public, she noted.

Thus, she said, “it will be important to effectively manage access rights as information flows back and forth through shared systems. There may well be a tradeoff between the privacy of financial partners and competitors on the one hand, and the ability to leverage shared transaction records for faster and cheaper settlement on the other hand.”

Read Brainard’s speech, “The Use of Distributed Ledger Technologies in Payment, Clearing, and Settlement”