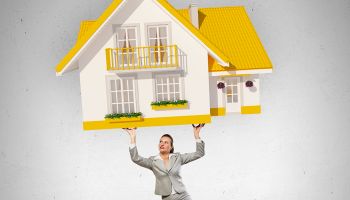 Home equity loans and lines of credit at large banks declined again during the first quarter of 2016, as both borrowers and lenders continue to rethink the post-crisis HELOC product.

The first three months of 2016 marked the 29th consecutive quarter of declines in home equity loans and lines of credit in the banking industry. The aggregate balance among U.S. banks and thrifts dropped 1.81% to $523.68 billion as of March 31, according to SNL Financial data.

The large base of HELOCs, a "hangover from the financial crisis," has "locked into maturation," said Vining Sparks analyst Marty Mosby. More of these loans are being paid off and the post-crisis, redesigned version of the product has not been able to originate new loans fast enough to counterbalance that decline, he added.

The four largest U.S. banks and many superregional banks top the list again of institutions with the largest declines in the first quarter of 2016 because of the large portfolios of HELOCs that they accumulated when the product was a key part of their consumer lending business, according to Mosby. 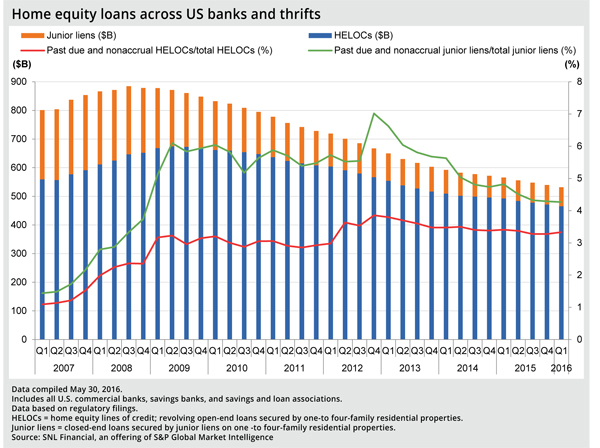 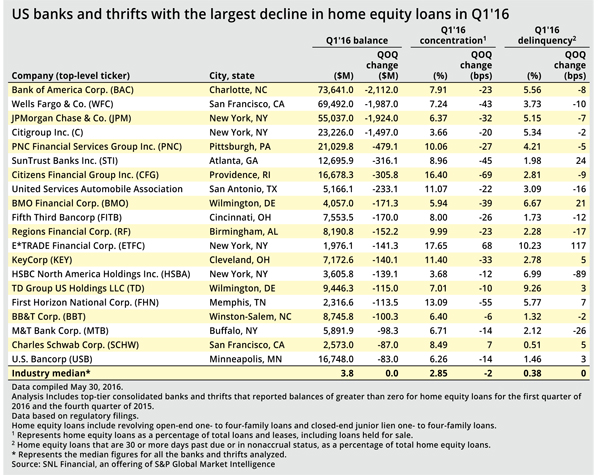 "They built up those big portfolios and they're still getting payoffs and paydowns that are still outpacing their ability to originate," he said.

Before the housing crisis, borrowers were encouraged to draw and spend the funds from their lines of credit, said Guy Cecala, CEO of Inside Mortgage Finance. Now, they are more of a specialized product for banks and a tool for borrowers who want to do home improvement projects, Mosby said.

"People also thought that home price appreciation was going to go on forever and never really worried about it," Cecala pointed out. "People now recognize there's no guarantee your home is going to appreciate and they're looking at it more as a loan that has to be paid back or at least paid down at some point."

In the current environment, lenders are also more attuned to the need for a system that enables customers to repay HELOCs instead of maintaining them, Cecala said. He said that before the housing crisis, most lenders exclusively offered an interest-only option for making payments. Now, most banks offer three ways to pay down a HELOC, he said. Cecala said that the two other paydown options allow borrowers to choose interest-only

Still, Cecala said that most banks are hoping to ramp up their HELOC originations. Due to a fairly flat mortgage lending market so far in 2016, financial institutions are looking to related areas to boost volume, he said.

Amid a generally positive tone in the U.S. housing market and rising home prices, some banks are optimistic. During the bank's April 14 earnings call, Bank of America Corp. CEO Brian Moynihan said that home equity has "kicked back up a little bit" because people see equity in their homes.

Mosby said that residential real estate is growing, particularly in the one- to four-family space which has "turned a corner."

"HELOC is still kind of working through the overhang from the financial crisis and the overemphasis that was so significant back before the downturn," he added.

This article originally appeared on SNL Financial’s website under the title, "Banks continue to deal with HELOC 'hangover' in Q1'16"