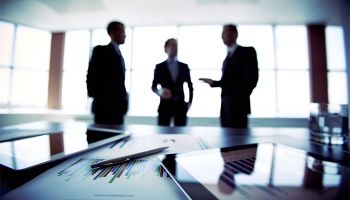 The different approaches to calculating tangible book value dilution in bank deals have caused a divide between bankers and the investment community.

As acquirers have employed different methods to calculate TBV dilution arising from deals, analysts have questioned the math in some transactions, particularly in cases where acquirers project results into the distant future.

Investors have to trust that any buyer can execute on an acquisition and are hesitant to take another leap of faith when banks offer projections far down the road.

Legacy of the Great Recession

Some banks have taken extra steps to provide additional disclosures, outlining their approach to calculating how long it will take to earn back TBV dilution arising from a deal, often referred to as the earnback period. The competing methods used to generate this number can sometimes yield different durations, which can call into question the assumptions management used when pitching a deal.

Concerns over dilution to TBV tie back to the financial crisis. Bank observers note that TBV became the preferred measure of a bank's worth during the Great Recession, when investors shifted their focus away from other metrics like price-to-earnings because of earnings volatility.

"Tangible book value is essentially a proxy for tangible common equity, so when you push it down, you're pushing your capital levels down," said Keefe Bruyette & Woods analyst Michael Perito. "I think a lot of people saw that even when earnings accretion is robust, that can change pretty quickly."

There are a variety of ways to calculate TBV dilution and those methods can include an assortment of variables. Two of the most common methods buyers use are the crossover method and the EPS accretion method.

The crossover method is a more nuanced approach, but is also more complex.

The buyer projects two earnings streams, estimating results as a stand-alone entity and as a combined company; when the two streams merge, the buyer has earned back the dilution it expects to incur. The model assumes the acquirer's TBV will continue to grow, but in some cases, the calculation does not include all one-time charges. Other names for this method include the dynamic or fully loaded approach.

Meanwhile, the EPS accretion method models the hit to TBV and then measures how long it will take the acquirer to earn back the dilution, assuming expected earnings accretion is fully phased into the company's earnings run rate.

The model includes all one-time charges in the dilution and all of the cost-saves in the accretion, which can make it a simpler approach. S&P Global Market Intelligence uses the EPS accretion method to calculate TBV dilution where information is available.

Depending on the approach used, the calculations can vary widely within a deal.

The different approaches to calculating TBV dilution have surfaced during some of the largest bank deals announced in the last year.

CFO Howell McCullough III highlighted the crossover approach and called it the "most rigorous" way to measure the long-term growth trajectory at the bank compared to its pre-merger path. The crossover analysis made executives comfortable with the nearly 12% TBV dilution per share it would book as well as the 5.5-year earnback period. 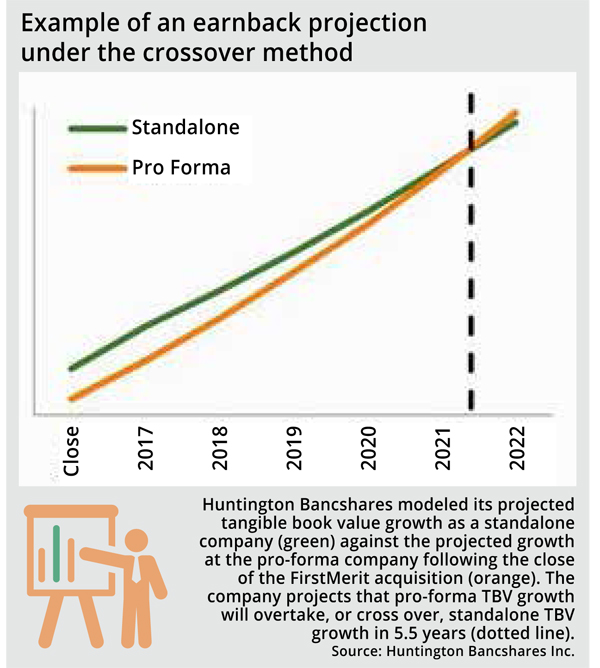 The EPS accretion method generated an earnback period between eight years and 9.75 years, using 2018 as its measurement year, according to a subsequent investor presentation. McCullough called that method "simple math" and a "one-year static view of the world."

The EPS accretion method has its fans. Terry Maltese, president and CEO of Maltese Capital Management LLC, said he understands why some people like the crossover method, but believes "the cleaner argument" is to "take tangible book value dilution and divide it by the earnings accretion." His firm independently calculates a buyer's earnback period after a deal surfaces.

Differences in earnback calculations have occasionally resulted in negative reactions from the Street.

Recently, Westfield Financial Inc. executives said the acquisition of Chicopee Bancorp Inc. would result in a 6% initial dilution to TBV and a 4.7-year earnback period under the crossover method. Westfield later released an investor presentation that included the underlying math and assumptions used to calculate the earnback following questioning during the call.

Even with the new information, Compass Point Research & Trading LLC analyst Laurie Havener Hunsicker calculated a much longer earnback period of 7.3 years using the EPS accretion method. She noted in a report at the time that the two calculations contained different assumptions: Westfield management used the operating cash flow EPS pick-up figure of 9 cents, while her analysis used a fully phased-in, or diluted, EPS figure of 6 cents.

The two deals highlight the fact that even when banks use similar methodologies, the approaches can include different components. With Huntington, the restructuring charge at deal close was reflected in the initial dilution, while the remainder of the charge was reflected in pro forma roll-forward TBV, according to the investor presentation. Westfield specified that its crossover calculation included all one-time and restructuring costs related to the deal, regardless of when incurred, and did not include any stock buybacks that would reduce share count.

Still, bank management teams maintain that the value of a transaction does not live and die by how long a buyer will take to earn back any TBV dilution.

"I think there should be a balance between the analysis associated with tangible book value dilution and earnings accretion," he said.

FIG Partners analyst Christopher Marinac, who said he prefers the crossover method, mentioned the Huntington acquisition and KeyCorp's pending purchase of First Niagara Financial Group Inc. as examples of transactions that may ultimately increase the franchise value of the buyer but were panned by the Street in part because of their earnback calculations.

"If we're going to criticize the payback for being too long and say 'That's a bad deal because it's over five years,' we have to be at least respectful and appreciate the fact they added to the franchise," he said. "That's not worth zero. I think when we talk about the payback period, we're myopically paying attention to one data point and not the big picture, and I think that's a really flawed investment approach."

Any lack of clarity in approaches and assumptions included in the calculations can make individuals in the investment community wonder if the different methods make earnback periods appear shorter than they really are. Management teams wanting to head off this impression could disclose as much information about their earnback figures as possible, including what was and was not included in the calculation, Marinac suggested.