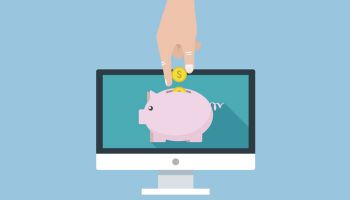 Radius Bank turns the internet into a strong deposit-generating machine. This effort takes care in the age of cyberfraud, but it's part of a new wrinkle on the nearly branchless bank.

Over 300,000 passengers arrive via ocean liner at Boston’s cruise terminal annually, coming from all over the globe. Just a stone’s throw in the maritime district from the cruise port you’ll find a company with much the same concept of reach: Radius Bank.

From its single office—a small branch at street level and a large processing center and headquarters above that—the $790.1 million-assets bank reaches out for deposits and other business via the web using advanced virtual banking methods and an eclectic business mix. Indeed, the bank’s headquarters reside in an area also known as Boston’s Innovation District, a city effort to convert 1,000 acres of seaport properties into a center for innovation, collaboration, and entrepreneurship.

“We’re in Boston’s seaport, but that doesn’t define us,” says Michael Butler, president and CEO at Radius. “We like to say that we think like a fintech, but that we are a community bank.” The bank’s community just happens to be very broad based.

You could say that Radius is a bank that reinvented itself. When Butler, an alumnus of KeyCorp, came aboard in 2008, what was then First Trade Union Bank had had some trouble. (The bank changed its name in 2014, and remains, by charter, a savings institution.)

Besides cleanup, a new direction appeared to be needed. Butler says he saw the increasing trend away from extensive consumer use of branches and decided an emphasis on virtual banking was in order. In part this was a quest for efficiency,  something the bank needed to work on; an effort to drive profits; and to raise deposits without the cost of a branch network. 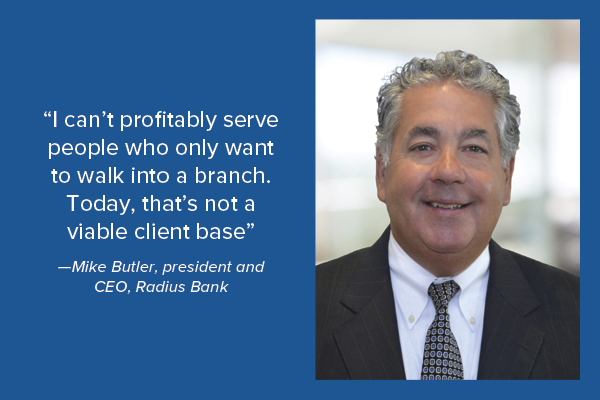 “I can’t profitably serve people who only want to walk into a branch,” says Butler, who previously ran KeyCorp’s national consumer finance operation. "It’s not a viable client base.”

Butler can see opening a branch here or there for marketing exposure in the future—much like the classic boutique branches ING Direct opened in major cities years ago to promote its then almost unique virtual banking model. But Butler doesn’t see branch banking as the model for his organization.

Squeezing in with the virtual team

Most of its players work together in one fairly small office, sans walls. And, yes, they are pretty much millennials. Tremont’s team includes young bankers who handle data analytics, cybersecurity, third-party partnerships, and many other aspects of the bank’s web-based virtual relationships. Butler, father of millennials himself, says the team averages 26 years old.

In this branchless model, a key part of the bank’s “front office” comes under the control of Carie Kelly, assistant vice-president and direct channel manager, who works a big piece of the virtual strategy from her desktop computer. Based on deposit accounts opened and on Google Analytics, Kelly is constantly shifting where Radius reaches out to people via the web.

Ever wonder who is behind those ads that sometimes seem to follow you around the internet, or that pop up at the top of your web searches? Radius Bank is among those players.

“We are looking for ‘technology early adopters’,” says Kelly. The bank uses psychographic and demographic data to match the type of customers it wants with the type of traffic experienced by the websites where it places banner advertising through Google. Butler explains that the virtual team receives a budget for this promotion—so much money to raise so much in deposits. The cost includes the “pay per click” charges that the online ads generate.

Kelly explains that literally hundreds of sites may carry Radius Bank ads on a given day, based on traffic. Results are tracked every which way, and the strategy is fine-tuned constantly.

Kelly says that some of the most productive sites for Radius have been NerdWallet, MyBankTracker.com, GOBankingRates.com, BankRate.com, DepositAccounts.com, and Google and Yahoo themselves. Among the accounts offered are the Radius Hybrid Account, which combines a checking account with a high-interest feature after the balance passes a $2,500 threshold.

The virtual effort moves millions in deposits, which are used to fund the bank’s portfolio of loans, a mix of commercial and residential real estate, C&I, and consumer.

The virtual banking team also monitors social media traffic regarding the bank, in case a customer service response is warranted. The bank provides customer support 24/7. During business hours this is handled by  workers in the Boston office's “Einstein Alley.” After hours the bank switches over to customer support provided by Harland Clarke.

Being careful out there

Given the risks of the web, Radius subjects the leads it obtains via online advertising to rigorous scrutiny, filtering them several ways. Damon Greenberg, assistant vice-president and support manager, manages this process to keep fakes out of the bank’s systems.

Butler says the risks cannot be minimized. About half of the applications for new accounts that Radius receives must be rejected. This may be because the applicant fails to pass an upfront filter. For example, at this time the bank prefers customers to be U.S. citizens or U.S. residents.

In addition, subsequent analysis may make the bank suspect that the applicant is using a phony ID.

Other avenues for Radius

Web promotion serves as one major means of bringing in business to this virtual bank, but another is strategic partnerships.

One partner is Aspiration, an online investment advisor and mutual fund provider that targets middle-class customers who are interested in sustainable businesses and related social causes. Aspiration uses mountain motifs on its website, and offers a higher-rate checking account with no monthly fees and free ATM access worldwide. This offering, the Aspiration Summit Account, is actually provided by Radius Bank. Butler says this partnership produces an average of between 500 and 600 accounts per week.

Another, very recent addition to the Radius family of partners is Gradifi. The bank and Gradifi have partnered to offer an Apple Pay compatible debit card that features something aimed right at the millennial market: paydowns on student loans.

Under this exclusive arrangement, cardholders will receive unlimited 1% rewards on all debit card purchases. The rewards go directly to the cardholder’s outstanding student debt through Gradifi’s secure platform. The program will debut this fall, and is designed to dovetail with Gradifi’s existing program. That effort gives employers the ability to make payments towards employees’ student debt, and is seen as a means of retaining younger workers who might otherwise migrate to other jobs. (Indeed, Radius is offering Gradifi’s program to its own employees. Butler compares the concept to the 401k match.)

Not just about millennials

While much about Radius Bank touches millennials, the bank is more than that. It is a full-service institution, and its operation includes employees of many ages.

He sees his staff as a blending of people who have been in the trenches and younger people with fresh ideas and approaches. Tremont himself, also a KeyCorp alumnus, has been a banker for over a decade. The bank staffs a relatively new national SBA-lending team based in Chicago chiefly with a large group of veterans lifted out of another institution.

Tremont says the bank actively solicits feedback through formalized methods, such as surveys, as well as through social media and live calls.

“We’re all trained to take complaints, and to do something about them,” says Butler.

Butler says he recalls a board meeting where some directors feared the bank’s venturing into social media. He said he took a realist’s viewpoint, and told the board that whether the bank went into social on its own or not, there would be people out in cyberspace commenting on Radius. “We might as well know about it,” says Butler, and be able to respond. Given the bank’s extensive web presence, this is almost a given these days.

Complaints on social media can’t wag the dog, however. Butler recalls how it became necessary to lower the rate on a particular product. Predictably, people griped online, such as “Oh, you guys are just like all the rest of the banks.”

It was a business decision, says Butler, but sometimes you can’t explain that, because some folks don’t want to hear that.

Says Butler: “You’ve got to be willing to take a couple of arrows now and then.”

In June of this year, the bank received a major private-equity-backed recapitalization, removing all but a 5% interest of its original union pension and benefits fund ownership.. With the transition—and $18 million in growth capital—Butler hopes to craft a bank of the future.