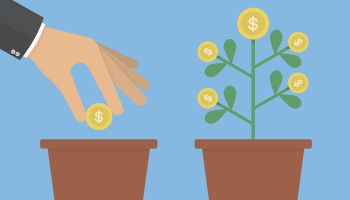 Decreases in long-term rates have prompted some banks to take a cautious investment approach, but even those institutions could still see their security yields come under pressure as they reinvest existing cash flows at lower rates.

The Federal Reserve finally raised short-term rates in mid-December but long-term rates have fallen considerably since then, with the yield on the 10-year Treasury dropping to 1.78% at the end of the first quarter from 2.27% at year-end 2015.

The yield on the benchmark security has come under even greater pressure more recently, falling below 1.5% after the United Kingdom decided to leave the European Union. The surprise Brexit sent global long-term rates lower, and the yield on the 10-year Treasury followed.

As rates headed lower this year, some bank managers said they were hesitant to put money to work.

Wells Fargo & Co. CFO John Shrewsberry noted at a recent investor conference that his company let cash build in the first quarter, but does not plan on continuing that strategy going forward.

"Of course, there will be a day also where, whether it's at the short end of the curve or a little bit further out, we can redeploy some of this excess liquidity in an incrementally more profitable way without taking that much more risk," Shrewsberry said at the conference, according to the transcript.

Banks have put fewer funds to work in the bond market in recent quarters, but the size of those portfolios remains quite large. SNL data shows that securities fell to a median of 18.9% of tangible assets at the end of the first quarter, compared with 20.2% a year earlier and 21.4% two years ago.

Banks with higher balances of securities could see their net interest margins come under pressure in the second quarter due to the recent drop in long-term rates. While the yield on the 10-year Treasury fell nearly 50 basis points in the first quarter, the average yield on the 10-year has been 15 basis points lower in the second quarter, Raymond James' bank analyst team noted in a June 27 report.

The last time the 10-year declined considerably quarter over quarter—the average yield fell 31 basis points from the fourth quarter of 2014 to the first quarter of 2015—banks in the analysts' coverage universe reported a 10-basis-point decrease in earning-asset yields. The decline caused those institutions' average net interest margin to contract by 5 basis points in the period, the analysts said. 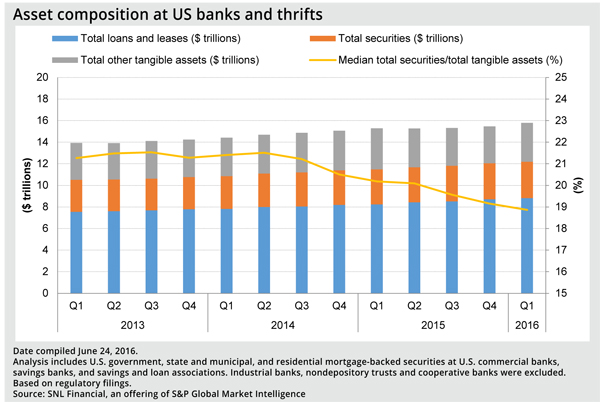 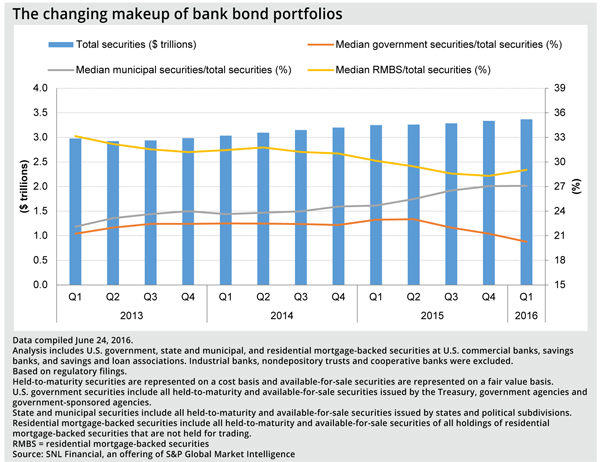 Some banks could decide to put excess liquidity to work when rates are higher. Stifel's Fixed Income Strategy team recommended this in early June, suggesting that banks keep duration short to take advantage of higher rates when they eventually come to pass.

That has not occurred as the weak May employment report and the news of Brexit have sent yields lower and called into question the possibility of future Fed rate hikes.

Some banks have to maintain certain levels of security balances as that has occurred, in part to comply with regulations. Banks with more than $50 billion in assets, which held 72.8% of all securities in the banking industry at end of the first quarter, are required to maintain high-quality liquid assets greater than their projected cash outflows during a stressed scenario to comply with the liquidity coverage ratio, or LCR.

Many of those high-quality liquid assets, or HQLAs, are low-yielding securities such as Treasurys and agency debt. However, the Fed on April 1 finalized a rule allowing investment-grade general obligation state and municipal securities to count as HQLA. LCR-banks could see the classification of certain munis as HQLA as a way to modestly boost their security yields, but the balances held fairly steady in banks' investment portfolios in the first quarter with the prior period.

Banks' holdings of government securities, meanwhile, have declined, falling to a median of 20.3% of securities in the fourth quarter of 2015 from 23.0% a year earlier.

Banks built RMBS balances in their securities portfolios in the first quarter after several years of declines. RMBS could experience more significant price movements in a rising-rate environment due to negative convexity from extension risk, or the risk that investors will hold below-market rate securities for longer periods of time since prepayment speeds will slow when rates rise. The industry increased its relative exposure to RMBS in the first quarter, building those balances to a median 29.0% of total securities, from 28.3% in the prior quarter. 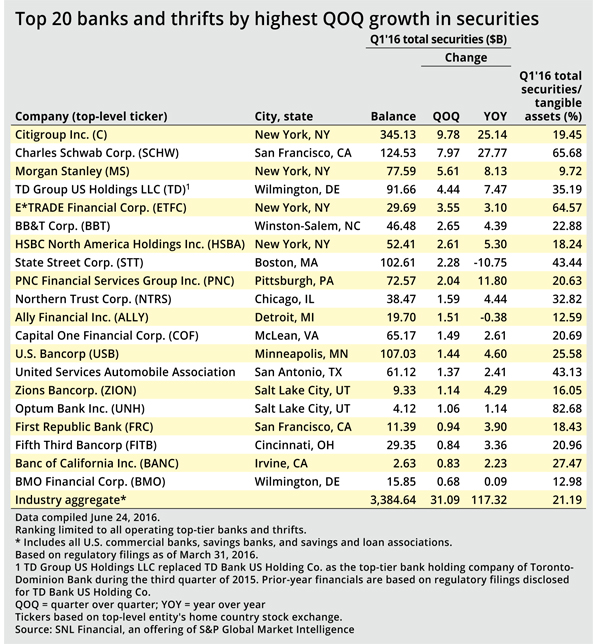