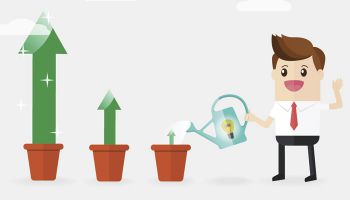 Among community banks, having more assets seems to be associated with outsized growth.

S&P Global Market Intelligence analyzed those with less than $10 billion in assets that had reported earnings as of July 22. For the quarter ended June 30, those within the $5 billion-to-$10 billion range grew operating revenue year over year by a median of 8.94%. The median EPS increase was at 4.35%.

An early look at earnings results showed plenty of noise from recent M&A, mostly of whole banks, plus some insurance agencies. The broader community bank space continues to seek relief from regulatory burdens as the nation's smallest banks bear the highest costs.

"There's no question that some of the larger community banks seem to be doing better," Chris Cole, Independent Community Bankers of America's executive vice-president and senior regulatory counsel, said in an interview. He estimated the "sweet spot" in asset size to be around $300 million to $500 million, above which "there [are] still regulatory pressures, but … banks can deal with [them] without merging." 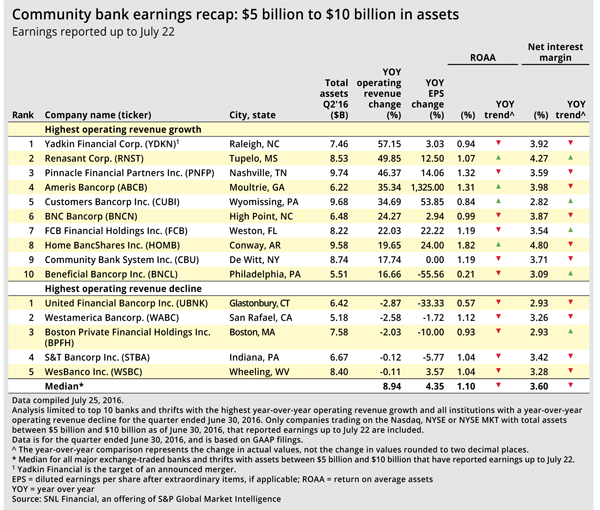 Of course, deals abound even well above that half-billion mark. Tupelo, Miss.-based Renasant Corp.; Nashville, Tenn.-based Pinnacle Financial Partners Inc.; and Wyomissing, Pa.-based Customers Bancorp Inc. have all recently completed acquisitions. For Customers, it was a disbursements business, as it prepares BankMobile's spin-off in order to delay crossing the $10 billion threshold. 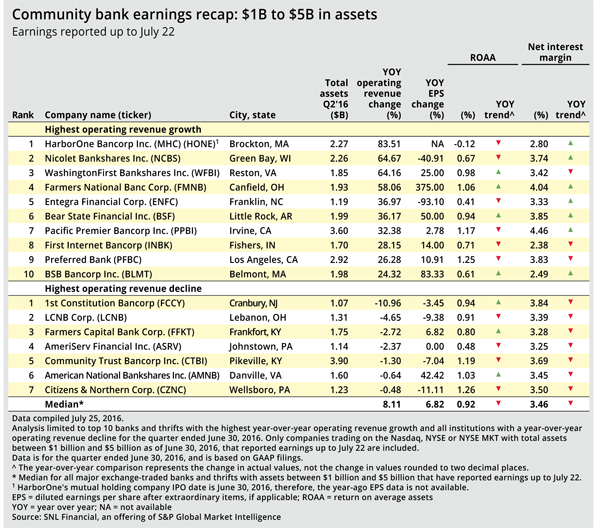 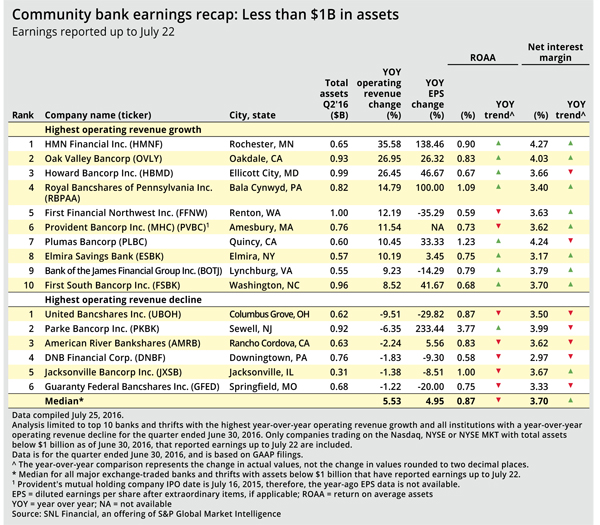 At Oakdale, Calif.-based Oak Valley Bancorp, the quarter's results were a combination of a December 2015 acquisition and loan growth, CFO Jeffrey Gall said in an interview. An uptick in regional loan demand and its effort to hire more lenders also helped the $926 million-asset bank, said the finance chief.

And while lobbying for regulatory relief has made some progress, the difference has yet to be felt. Chris Marinac, FIG Partners' director of research, pointed out that the easing in certain areas, such as reporting requirements, are offset by the higher compliance demanded in others, such as cybersecurity. Leaner call reports are "nice," Marinac said, but certainly not enough.

This article originally appeared on SNL Financial’s website under the title, "Talk of M&A signals small-bank scramble to be bigger"