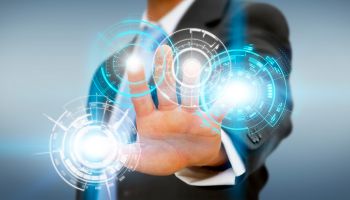 Increased "touchpoints" of digital banking result in more business, according to research by Bank of the West and Fiserv.

Bankers have complained for years that when a new channel comes along—think ATM, POS, website, online banking, in earlier days—consumers want that access. And they generally want it for free, or, at least, no more than they are paying now. And the ways and means of serving consumers keep on growing—mobile banking, banking apps, and whatever’s around the bend. Nothing gets left behind, either. Branch networks may shrink, for example, but the branch keeps on going.

Yet banks must keep up with technology and consumer demand, so they keep spending. Today the big bucks are in digital channels. But are banks getting a decent return on their digital investment?

To Jamie Armistead at Bank of the West, that’s not an academic question. It’s an answer on which his career hinges.

“The issue is about seeing customers digitally engaged and more satisfied with the bank as a result,” says Armistead, executive vice-president and head of digital channels at the bank. He says he and others on his team felt that there was more payoff than merely holding onto customers through enhancing digital engagement.

“We’re very bullish on digital,” says Armistead. But the question was, could you put numbers on that? And beyond that, how does digital banking impact the overall customer experience and the ultimate value of the digital customer to the bank?

Going with the flow, and beyond

Working with Fiserv, Bank of the West analyzed both behavioral and transactional data to go beyond gut feel and hope, to measuring digital engagement overall and among multiple customer segments.

Digital stands out from traditional banking engagement because “it’s happening all the time,” according to Matt Wilcox, senior vice-president, marketing strategy and innovation at Fiserv.

Try explaining to a millennial customer that once upon a time, savings accounts were recorded in passbooks, and that people used to trek to their bank quarterly, in many cases, to have their interest credited in little lines of ink.

Tech evolution has become something of a rip tide that banks are pulled by, like it or not.

“We’re surrounded by it,” says Armistead.

Looking at the customer before and after

The companies’ joint study, published as the white paper Quantifying The Value Of Digital Engagement, began with an initial study base of 412,000 Bank of the West customers, using data gathered from August 2013 to August 2015. (From that initial base, the project evaluated the behavior of approximately 31,000 digital users.) The study compared customer value, measured in multiple ways, both before and after consumers’ adoption of digital banking. The key item was incremental change. This was compared to the behavior of people who did not adopt digital.

The study considered the starting place fo being digitally engaged to be an active user of either online or mobile banking. (The industry defines an active user as one who has logged in with the previous 90 days.*)

Broadly, the research found that digital customers are among the bank’s most valuable clients. They use more revenue-generating services than customers who don’t use digital services. In addition, they prove to be more loyal to the bank.

Wilcox says that digital customers have more “touchpoints” with the bank than other customers. One of the factors evaluated in the study was “recency.” As Wilcox explains this concept, it goes beyond simply engaging with the bank to frequency of engagement.

The digital customer’s financial life simply ties in more often with Bank of the West. (The white paper cites a Javelin project that described online banking as “the most vital touchpoint in a financial institution’s relationship with its customers.”)

Wilcox says modern digital customers “want an integrated experience, not a siloed experience.” While firms offering narrow financial apps at this point see the customer as interacting with their providers by the slice, Wilcox believes digital customers would rather buy the whole pie in one place. Banks need to find ways to sell whole pies, and that is something Bank of the West has been accelerating.

For years banks evaluated their success by cross-sell ratios, evaluating how many relationships consumers maintained with one institution. A key emphasis was on designing products and sales techniques to build the ratio. The digital project Bank of the West and Fiserv pursued indicates that the new channels result in broader and deeper relationships that bring increased sales in their wake.

• Greater revenue growth. Once customers became digitally connected to the bank, annualized revenue per customer among those customers increased by about 10.7%. Among highly digitally engaged customers, revenue rose at a higher rate—13.1%. By contrast, over the same period non-digital customers—those only using branch services—produced only a 4.5% increase in revenue.

Revenue in this context includes interest income from credit products and such sources as interchange fees, late fees, finance charges, and over-limit fees.

• More relationships. After digital enrollment, customers’ average total product holdings rose 58.4%. This translated to an average of 1.1 more products than they had before. By contrast nondigital customers produced virtually no additional relationships.

In this context, new product relationships included such items as loans, CDs, credit cards, and mortgages.

The bank indicates that account alerts, mobile photo deposit, online billpay, and mobile photo billpay are among the services that help hold customers.

The bank suggests that the ability to track balances digitally help customers manage their finances when making buying decisions, contributing to both increased credit and debit usage.

Fiserv’s Wilcox says the increases in both credit and debit card usage was interesting, and not something that was expected, since they don’t necessarily involve a digital element. However, he says, this indicates the influence of increased engagement by digitally oriented customers.

Typical digital banking customers included both millennials (18-35) and Gen X (35-55), though other demographic groups also use these services. 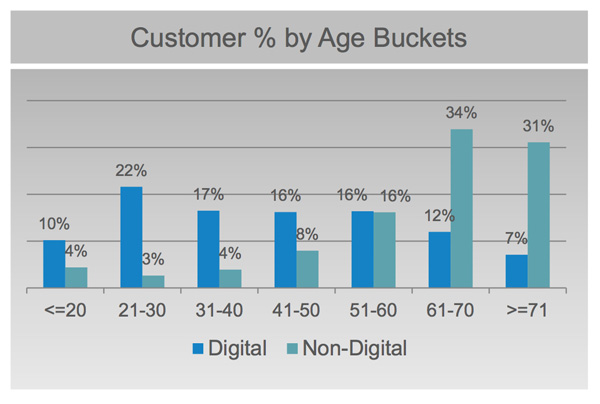 • Use digital services to manage their cash flow and balances and that they rely on digital channels both to handle existing relationships and to adopt new products.

• Have three or more products, defined by such categories as mobile banking, billpay, P2P payments, etc.

• Have a debit card and average 25 or more point of sale transactions each month.

• Have three or more credit transactions each month.

• Have four or more ACH debit transactions each month.

• Have high frequency of transactions each month—30 or more—including offline (such as branch transactions), online, and mobile. 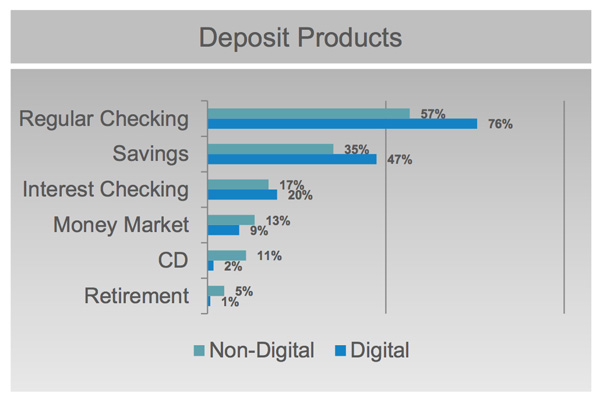 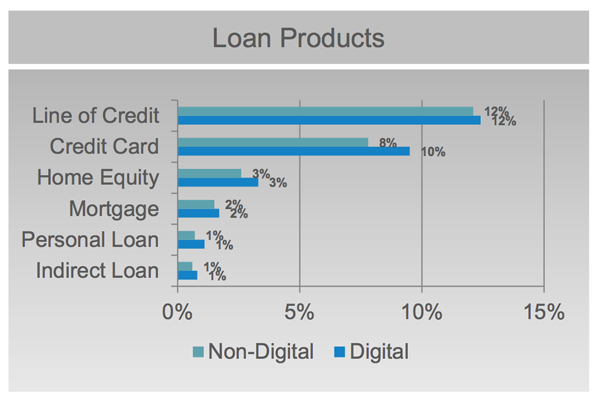 The study’s findings substantiate the bank’s investment in digital banking, in Armistead’s view. Bank of the West has been a leader in adopting leading edge digital functionality. Among these steps is adoption of “Scan to Pay” service, where scanning a bill sets up a payment transaction. Another is a major redesign of the bank’s online banking services engineered to recognize how people use different electronic interfaces to do electronic banking, often according to time of day.

What banks can do with these lessons

One of the findings across the overall study was that enrollment in digital services can stimulate customer segments who have not tended to engage much with the bank beforehand. Wilcox explains that adding digital to the mix improves the customer experience and adds value in nondigital channels for those enrollees.

To illustrate such potential, Jamie Armistead tells a story out of some focus groups that Bank of the West held. Among one group, a woman—actually, a millennial—told interviewers, “It would be great if I could go to one place on your website and pay all of my bills electronically.”

Armistead says he and other observers thought: “But she’s describing billpay.” The point taken was that the bank has to sell the digital message harder.

And the bank has been taking steps to do just that. Armistead says that branches represent a key opportunity to sell the bank’s digital side.

The bank is working to accomplish this by increasing digital’s “shelf space,” as Armistead calls it, in the branch and in its call center operations.

For example, the bank is rolling out a program of placing “digital ambassadors” in every branch to put the bank’s services right in front of branch customers. (Generally ambassadors will assume the role of digital subject matter expert on top of their “day job.” They will be educating fellow employees, as well as customers.)

The bank has also been stepping up the attention paid to digital products in communications streams, such as its website, where the bank can control the message. Among the measures being applied are cash incentives to get customers to try out billpay.

One factor that’s different about banking services, versus, say buying a car, Armistead notes, is that people don’t download six banks’ mobile banking apps so they can try them all out. It’s not like test driving vehicles at different dealerships. So the bank has been striving to get consumers’ attention about digital channels in the branches.

The idea of an online “test drive” has appeal, however. “We are working on an internet demo capability for online banking and mobile banking,” says Armistead. This will initially be launched in branches.

Overall, the process “is not about pushing customers out of the branches,” says Armistead. “It’s about getting customers digitally engaged and thus more satisfied with the bank. Among the digitally active, Bank of the West becomes more top of mind. And that helps us become top of wallet.”

* In ranking digital engagement, the study used a three-element model, summarized in the report as follows: "The RFM (recency, frequency, monetary) scoring process used in the study looked at customers who were active over a six-month period in online banking, mobile banking, ACH debit or bill pay and evaluated them on their level of engagement. Using three dimensions—recency (time that has elapsed since the customer’s most recent transaction), frequency (the average number of transactions made by the customer during the analysis period) and monetary (the average transactions amount in the analysis period)—consumers were ranked on a scale from minimally engaged to highly engaged."