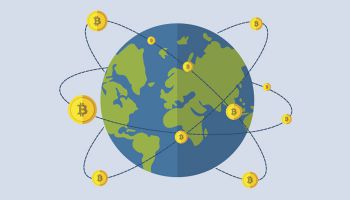 One reason the blockchain reaction is racing toward critical mass faster than previous disruptive technologies is that it is arriving in the midst of the digital transformation already sweeping through most sectors of the global economy.

Consequently, despite the obstacles still to be overcome, businesspeople and governments are preconditioned to recognize blockchain’s potential and tech companies have already established much of the digital infrastructure required to realize blockchain business visions.

Early pilots are already underway in many industries. They tend to focus on blockchain uses that drive cost out of business processes by making transactions more efficient. While these may be highly valuable uses, it is the entirely new business scenarios that have the potential to disrupt and remake entire industries; that promise to reduce or eliminate intermediary businesses; and that raise challenging new tax, compliance, and regulatory questions.

Blockchain is starting out just like the internet. One of the internet’s initial uses—email—made sending letters easier, faster, and less costly.

But that is not why the internet disrupted so many industries.

In financial services, the first round of blockchain pilots is exploring more efficient ways to provide today’s services, such as transferring equities or other financial instruments in blockchain environments with potentially faster settlement and far lower transaction costs.

But the long-term blockchain vision is of markets that run by themselves, with finance embedded directly into the natural activities occurring within those markets. In such an environment, the finance industry will look very different than it does today.

Ownership, financing, registration, insurance, and service transactions could all be tracked together.

Such a blockchain would make it possible for a manufacturer of driverless cars, for example, to place its cars in a ride-hailing company’s fleet. Every time the car was paid for a ride, a blockchain smart contract with embedded financing would deliver a revenue share to the manufacturer.

In such a scenario, the manufacturer may never need to “sell” a car to a consumer. Bank financing could cease to be part of the picture, the manufacturer depending on the long-term cash flow resulting from its share of every transaction entered into by its products.

Blockchain’s diverse business and industry possibilities are ultimately limited only by everyone’s collective imagination. The following seven scenarios demonstrate the breadth of the technology’s potential impact.

1. Embedded health. As in the embedded finance scenario, a blockchain could host a health care information ecosystem including providers, payers, and patients, along with their related data (electronic health records, pharmaceutical data, real-time health telemetry from wearable activity trackers, etc.).

Payments could run seamlessly among the insurer, patient, and provider. Even though no one party owns or controls all the information, smart contracts could define circumstances in which private information is shared, such as releasing medical information to emergency responders treating accident victims.

Further, feedback from wearables could either reduce or increase a person’s premium in real time, depending on the reward system established by the insurer.

2. Eliminating digital rights theft. Publishing digital works, such as music, in a blockchain environment could reduce or even eliminate piracy.

If anytime anybody uses a music file anywhere in the world, and that action were automatically recorded by a public blockchain, and the transaction can be validated, there would no longer be digital rights theft.

Of note, as reported in Quartz, British songwriter Imogen Heap has announced plans for a blockchain-based music ecosystem in which artists can place their songs and control song data and terms of usage, with transaction royalties distributed in real time to the artists, producers, writers, and engineers involved in a song’s production.

3. New credit markets for low-cost assets. Traditionally, transaction costs put a practical lower limit on the practice of using assets as collateral to secure a loan.

By taking so much cost out of transactions, blockchain could open up lending to whole new classes of lower-value assets. While the blockchain has useful impact in every business, it’s probably most empowering at the lower end of the market. Transactions that were too expensive previously will create new markets.

4. Pay-for-performance. Smart contracts could automatically enforce pay-for-performance agreements in many industries, the simplest example of which is in shipping. A sender could agree to pay $25 if a package is received by 10 a.m. tomorrow, $15 for 5 p.m. delivery, $5 for the following day, and after that, nothing.

5. Government tax enforcement. The European Union’s recent move to stop producing €500 notes may be only the beginning of a growing move away from “hard cash” to digital transactions.

In a world where every transaction is recorded in real time, then of course there is no way to hide illegal businesses and there is no way not to pay the tax that is due. A report this year by the U.K. Government Chief Scientific Advisor—“Distributed Ledger Technology: Beyond Block Chain”—proposes a blockchain-based European value-added tax (VAT) system that would increase transparency to “make the black market economy more difficult to conceal” and “include smart contracts designed to outsmart the tax quasi-compliant economy.”

6. Industrial mash-ups. Blockchains could become an enabling engine for the extensive partnering required to pursue certain kinds of new business opportunities, particularly in the sharing economy or the Internet of Things (IoT).

Industrial mash-ups are fluid partnerships that replace the “physical” vertical integration of a merger or acquisition of a joint venture with the “virtual” integration of an ecosystem of collaborating partners to bring the new business idea to market.

Idle time of high-value industrial assets can be worth up to millions of dollars per day or per hour—and the fact is industrial assets are often quite underutilized. Blockchain- powered industrial IoT networks will allow economies to connect industrial assets—everything from shipping containers to MRI machines to construction equipment—into real-time digital marketplaces that can make better use of them.

Blockchains would become the interaction engines for these marketplaces, supporting financing, rental, insurance—all kinds of services.

This article is adapted from a section of EY’s “Blockchain Reaction: Tech Companies Plan For Critical Mass.” Download full report