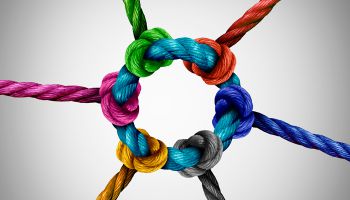 Who says you have to go it alone to stay on your own?

Inevitably when community banks merge, key reasons include rising technology and compliance costs, and the ability to find increasingly specialized talent. An alternative may lie in sharing resources with other banks.

Many vendors can sell banks expertise, advice, and services, but often bankers want some degree of ownership in their resources, points out Shane Deal, deputy commissioner of financial institutions in Minnesota’s Department of Commerce.

Deal helped produce a white paper recently published by the Conference of State Bank Supervisors, Shared Resource Arrangements: An Alternative to Consolidation. It is a state regulatory companion to a 2015 Comptroller’s Office paper, An Opportunity for Community Banks: Working Together Collaboratively.

Over the years, many community bankers have shied away from collaboration. Often, the reason is fear that if two organizations sharing a specialist both face a “fire,” a tug-of-war will result. Cooper and Deal stress the need for having the right partner.

Deal says attracting a good BSA/AML specialist can be difficult for a rural bank. Attractive salaries can be harder for a small institution to offer, and persuading an expert to relocate may be difficult.

Yet, says Deal of his state’s many small, rural institutions, “those banks are the lifeblood of those communities,” and they need expertise.

Among the success stories in the CSBS white paper:

• Sharing IT ownership—and income. Four community banks banded together to share ownership in a data processing provider. To avoid operational risk, one bank houses the main IT center and another houses the backup facility. The center also serves other institutions, making money for the four partners.

• Sharing a compliance team. For over a decade, four community banks with a small degree of common ownership have shared a compliance team. Team members take advantage of remote work capabilities. One bank reported it saves $30,000 annually compared to similar banks that don’t collaborate.

CSBS and OCC urge that bankers wishing to collaborate discuss ideas with their regulators. Regulators also emphasize the importance of addressing third-party vendor risks, and collaborative efforts come under that concern. Due diligence is key, says Deal.

Among the other regulatory issues discussed by the CSBS white paper are the identification of shared employees who work with customers; establishment of policies and controls; and the consideration of federal- and state-level employment laws.

The white paper notes that FDIC often looks to OCC rules on activities and investments permissible for national banks. Also, antitrust laws must be considered, bringing in Federal Trade Commission and Department of Justice guidance. Such matters may influence who makes a suitable and compliant partner.

For the independence-minded banker, collaboration may be the answer.