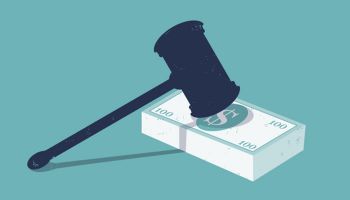 Republicans celebrated and consumer advocates have decried an Oct. 11 ruling that the Consumer Financial Protection Bureau is unconstitutional, but the ruling might actually derail Republican efforts to revamp the regulator.

The U.S. Court of Appeals for the District of Columbia Circuit found the regulator's single-director leadership structure is unconstitutional.

However, rather than suggesting adoption of a commission—something Republicans have attempted to legislate—the justices merely sent the CFPB to the executive branch.

"This decision is actually a blessing in disguise for the CFPB," said Adam Levitin, a law professor for Georgetown University who serves on the bureau's Consumer Advisory Board. He said the decision should kill Republican efforts to implement a commission structure since the justices have already addressed the constitutionality issue.

Created by the Dodd-Frank Act to enforce consumer law, the CFPB has been a lightning rod for Republican criticism. Rep. Jeb Hensarling, R-Texas, the chairman of the House Financial Services Committee, has often called the agency "the single most powerful and least accountable federal agency in American history."

Similarly, the Oct. 11 ruling railed against the agency's "single, unaccountable, unchecked Director" as a "threat to individual liberty."

But he said it is unlikely the ruling affects the chances of reforming the agency. "Whether the agency should exist in the first place has been a constant battle since Dodd-Frank was passed," Schardin said. "And I don't think this changes much."

Levitin said the ruling might politicize the CFPB more by subjecting it to presidential discretion. The decision allows the president to fire the CFPB director at will; previously, such a removal could only come "for cause."

Laurence Platt, a partner for Mayer Brown's consumer financial services practice, agreed that the ruling dampens Republicans' unconstitutionality argument. "It doesn't undercut the policy argument of the advantages of a full board rather than a single director, but it does make the constitutional argument harder," Platt said.

Despite the narrow judicial remedy, the CFPB suggested in a statement that it plans to appeal: "The Bureau respectfully disagrees with the Court's decision. The Bureau believes that Congress's decision to make the Director removable only for cause is consistent with Supreme Court precedent and the Bureau is considering options for seeking further review of the Court's decision."

Brian Simmonds Marshall, policy counsel for Americans for Financial Reform, a consumer advocate that supports the agency, said he thinks the CFPB's appeal will be successful. "An eight-decades-old precedent makes clear that removal restrictions are constitutional," Marshall said.

Word from the Hill

Republicans celebrated the ruling and foreshadowed a strategy of using the court's rhetoric to support reform efforts.

"This is a good day for democracy, economic freedom, due process and the Constitution," Hensarling said in a statement. Hensarling has led regulatory relief efforts, headlined by legislation known as the Financial CHOICE Act, which includes implementation of a commission structure.

Hensarling's statement welcomed the ruling but stopped short of full endorsement. In the statement, Hensarling said the Financial CHOICE Act "solves the constitutional defect identified by the court today."

Democrats, meanwhile, responded by painting the decision as partisan.

"It's no surprise that a small panel of the country's most conservative judges has made such an anti-consumer ruling," said Rep. Maxine Waters, D-Calif., in a statement.

But what about the actual lawsuit?

"The CFPB quite often takes very broad interpretations both of its powers and of the laws that it administers. … They just learned an important lesson: somebody's watching," Platt said.

Alan Kaplinsky, a partner with Ballard Spahr, also said possible dampening of the CFPB's aggressive enforcement arm would be the ruling's largest impact. "The CFPB is going to be subject to more scrutiny in the future—scrutiny from the President and scrutiny from the courts," he said.

As lawyers often representing industry interests, Kaplinsky and Platt both said the regulator habitually oversteps its bounds and that the court ruling could force the CFPB to be more cautious.

"The CFPB is very often taking extreme positions. … It's almost everything they do," Kaplinsky said.

Georgetown's Levitin, who has testified in Congress defending the agency, said he thinks there will be little change in how the CFPB operates.

"There is some good language in the ruling for [Republicans], no question about that," Levitin said. "But, at the end of the day, what they get to take home for dinner is pretty measly."

This article originally appeared on S&P Global Market Intelligence’s website under the title, "Court ruling on CFPB constitutionality could be 'blessing in disguise' for agency"