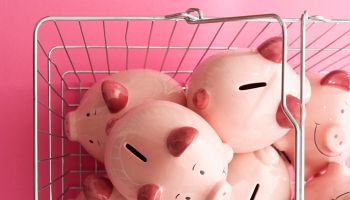 Conway, Ark.-based Home BancShares Inc. revealed it has entered into a nonbinding letter of intent to purchase a Florida bank holding company with a reported $400 million in assets. According to S&P Global Market Intelligence data, there are 15 banks based in that state with total assets ranging from $350 million to $450 million that are units of bank holding companies.

Home BancShares has purchased several other Florida bank-holding companies in recent years, the largest being the 2015 purchase of Florida Business BancGroup Inc. Since 2010, it has completed five whole-bank deals, six government-assisted deals and two branch deals in the state.

Peyton Green, senior research analyst for Piper Jaffray Cos., said though this acquisition has been alluded to in prior quarterly earnings calls, the company is most likely waiting for things to "clear up at the target" before signing a definitive agreement or releasing additional details.

"What I take from the announcement of the LOI is that things are progressing," Green said. "It doesn't mean it will happen, but it is moving along from a holding pattern to an active mode."

Chris Marinac, senior managing principal and director of research for FIG Partners, said the company will most likely seek to expand its presence in southern Florida. 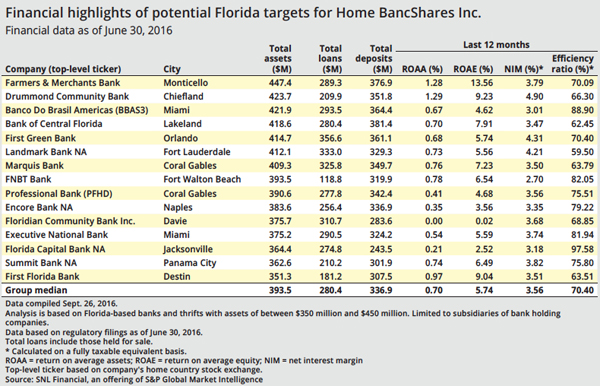 "I think what the company would like to do is have not necessarily the entire state covered, but really the main markets covered," Marinac added. "I think they've realized that to stay relevant in the next five years, Florida is an awfully important part of who and where they want to be as an institution."

Martin said he is less interested in what a single transaction will mean, and more interested in what the deal will mean for Home BancShares as a whole, especially if it pushes the $9.58 billion company over $10 billion in total assets. Meeting the $10 billion mark would mean the bank would need to cap charges on debit transactions and be subject to additional regulatory requirements.

"Most banks want to go over $10 billion in a big way so they can absorb those costs and those inefficiencies," Martin said. "By getting this deal and delaying it right now, they've kind of held off and now they don't have to pay off the revenue until mid-2018."

Martin said for a company like Home BancShares, buying a $400 million company "doesn't move the needle" a whole lot in terms of EPS. Instead, he said the company is probably interested in the deal because it is a "good strategic fit."

"They're going to get bigger, in my mind," Martin added. "They're looking at bigger transactions that move the needle more from an EPS standpoint and get them more scale in Florida. I think their eyes are on bigger deals."

This article originally appeared on S&P Global Market Intelligence’s website under the title, "Who's next in Home BancShares' Florida buying spree?"