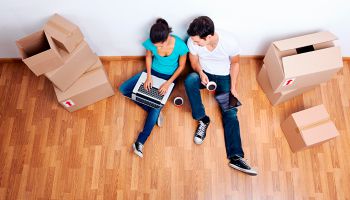 First-time homebuyers are moving up, moving in, and moving mortgages.

Nearly 3 million first-time homebuyers are projected to enter the U.S. housing market in 2017, the edge of a wave of as many as 17 million forecast to seek homes over the next five years, according to TransUnion.

Research by the credit reporting and analysis company in conjunction with AnswerMine indicates that younger consumers—between 20 and 39—will make up an increasing part of that swell of homebuyers. Consumers in that age range constituted 44% of home buyers in 2000. At the end of 2015, TransUnion says, this segment accounted for 60% of purchases. (An anomaly occurred in 2009-2010, when federal first-time homebuyer tax credits were offered as a post-crisis economic stimulus move.)

Several economic factors favor these trends, and a trending down of the average age of first-time homebuyers, according to Joe Mellman, vice-president and mortgage line of business leader at TransUnion.

First, rising wages and falling unemployment benefit the younger prospective homeowners, Second, he says, various mortgage programs have been opening up their criteria a bit, and showing more flexibility on credit scores and debt-to-income requirements. In addition, first-time homebuyers are coming into the market as more credit-worthy applicants, possibly reflecting some post-crisis conservatism.

This research was based on purchases made via agency and government loans. TransUnion uses the same definition of “first-time” as does the Federal Housing Administration—not having owned a home in the previous three years. (This is significant in part because they are therefore eligible for first-time homebuyer assistance programs.) 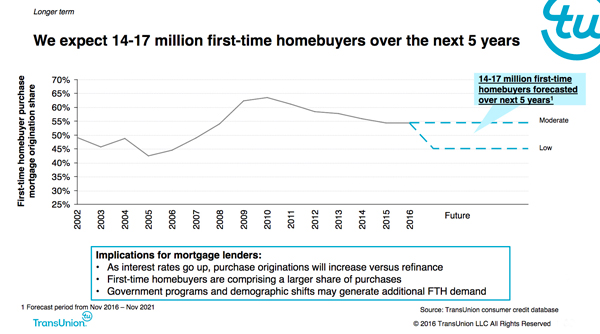 The five-year projection, which TransUnion said could range from 13.8 million to the 17.1 million figure, is based on mortgage market trends, the portion of consumers who don’t have mortgages currently, and current share of market by first-time homebuyers. In addition, the rising use of “trended” credit data may also be playing a role. (More about that in a moment.) 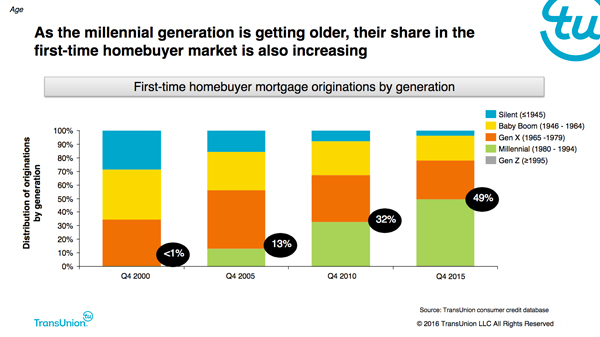 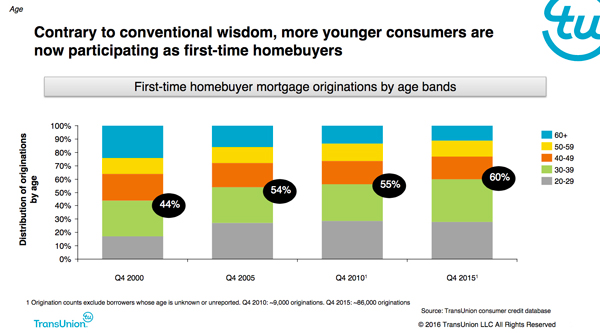 Mellman points out that the expected rise in first-time homebuyers may influence the economy in multiple ways.

For lenders, he says, first-timers represent a fresh stream of purchase-money mortgages, versus refinancings. They also represent an attractive customer group with lifestyle needs beyond their initial mortgage relationship. First-timers also represent an opportunity for present homeowners who wish to move up to a larger place—they need someone to whom to sell their smaller dwellings.

For the communities they move into, first-time homebuyers drive a great deal of purchasing for the home and related needs.

Mellman indicates that the first-time homebuyer today tends to display different credit behavior than nonbuyers in the same age groups. For example, he says, they tend to be more active users of credit, overall.

At the same time, Mellman says that the desire to be first-time homebuyers influences how these people use the credit they already have.

“This is a subset that takes proactive steps,” says Mellman, in an effort to safeguard and improve their credit. Typically they pay down credit card balances each month, rather than letting them roll over. 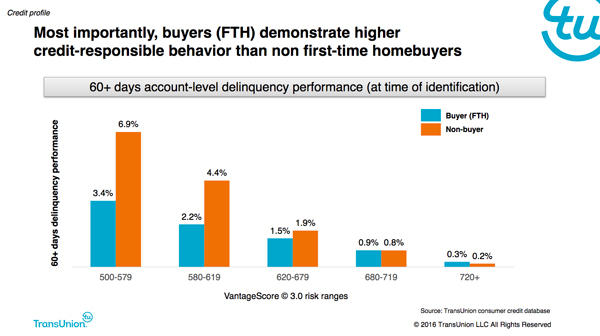 “They feel that it is better to use credit than to not use credit, so long as they act responsibly,” says Mellman.

Traditional credit reports resemble snapshots—an individual’s usage of credit at a moment of time. By contrast, trended credit reports show credit behavior over time. So, a trended report would indicate to a lender whether a consumer was adding to their indebtedness or reducing it, or whether they faithfully paid in full each month. TransUnion, Equifax, and Experian all now provide trended data services.