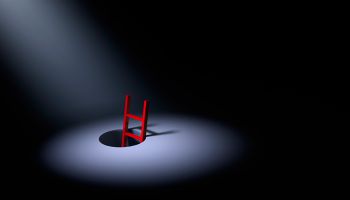 Banks are cutting branches almost everywhere. Only a handful of metro areas have seen an increase in branch count over the last year. Biotech and higher education mecca Boston is one of those metros. And so is Detroit, a city that was struggling even before the 2008 financial crisis and that suffered outsized job losses through the recession.

Of the 945 metro areas in the United States, 858 metros saw flat or shrinking bank branch totals between June 30, 2015, and June 30, 2016, the as-of date for the FDIC's Summary of Deposits data. Most of the cities with branch increases saw one or two extra branches.

"There's been significant investment within the city, and that investment has led to business relocation in the city, development of apartments [and] entrepreneurship. So all of these factors have created a situation where there is additional need for business services," said Patrick Fehring, chairman, president, and CEO of Level One Bancorp Inc., a relatively new bank that started in Detroit's suburbs but opened a downtown branch in January.

But it was a larger bank that drove Detroit's branch increase. Superregional Huntington Bancshares Inc. has made a concerted move into Michigan, including the Detroit market.

The bank purchased FirstMerit Corp., adding 138 branches in the state. But Huntington's contribution to Detroit's year-over-year increase in branches does not include the deal. Huntington opened 25 branches in the Detroit MSA and closed just two during 2015. The openings helped end a seven-year stretch of shrinking branches in Detroit. 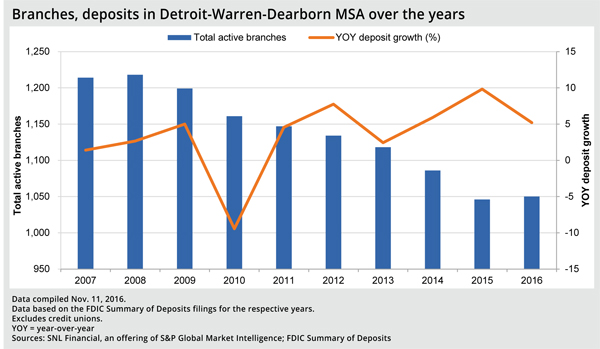 The bank's aggressive growth strategy has largely been driven by its partnership with grocery store chain Meijer, accounting for 23 of the 25 branch openings in Detroit. Brian Bromley, Michigan retail branch director for the bank, said the in-store branches complement traditional brick-and-mortar branches and have contributed to outsized growth in the number of households the bank serves.

"Before we went in with a Meijer branch, we weren't in a certain community at all," he said. "So Meijer gets it started, and you are able to grow exponentially when you have a traditional retail branch as part of a network group [with in-store branches]."

Bromley said the in-store branches give Huntington instant foot traffic and have a lower overhang than traditional branches. But the bank still spends significant resources on the stores, keeping them open seven days per week and investing in the store's aesthetics to attract customers in the grocery store, he said. 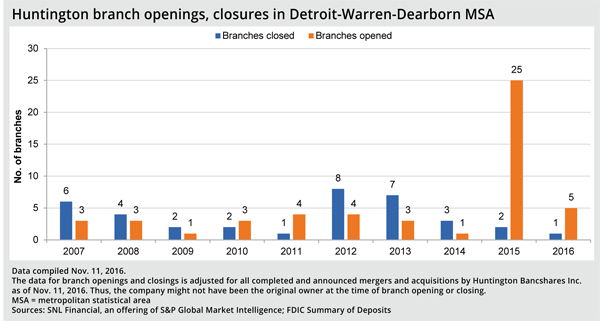 More to picture than branches

Banks have played a role in Detroit's resurgence outside of branching. Some of the nation's largest banks, such as JPMorgan Chase & Co., Citigroup Inc. and Bank of America Corp., have joined lending programs to address the city's housing crisis.

Detroit home prices arguably suffered the most from the recession. Metros such as Las Vegas saw greater peak-to-trough declines, but no housing market fell in as deep a hole as Detroit. For example, in early 2011, Las Vegas home prices were down 58% from 2006 compared to Detroit's decline of 45%, according to the S&P CoreLogic Case-Shiller Home Price Index.

But Las Vegas' home prices in 2011 were still roughly on par with 2000 levels; Detroit's home prices were 30% below their 2000 levels without even accounting for inflation. Part of the decline came from a loss of population as the region lost thousands of jobs, particularly in auto manufacturing. That meant a lot of the homes were vacant and rapidly deteriorating. So, even if a seller and buyer agreed to a price, there could be appraisal issues.

Some of the bank partnerships have targeted this issue. Bank of America's partnership with nonprofit Neighborhood Assistance Corp. of America, or NACA, offers mortgages with loan-to-value ratios of up to 150%.

And in February, the city of Detroit unveiled the Detroit Home Mortgage, which leverages grants from private foundations to issue second mortgages that can cover the gap between the price and the appraisal as well as provide a budget for renovations. Five banks joined that effort: Huntington, FirstMerit, Talmer Bancorp Inc., Liberty Bank and Trust Co. and Flagstar Bancorp Inc.

Executives at Chemical Bank, which recently acquired Talmer, said they will continue to participate in the program.

"I think our industry has worked very closely with the mayor's office to look at ways we can be helpful," said Patricia Herndon, advocacy director for the Michigan Bankers Association. Herndon cited the relocation of businesses from the suburbs to downtown Detroit, and partnerships between the Detroit Land Bank and financial institutions, in addition to the Detroit Home Mortgage partnerships. Financial institutions such as Quicken Loans Inc. and Fifth Third Bancorp have relocated suburban offices to downtown Detroit, feeding into the revitalization effort. 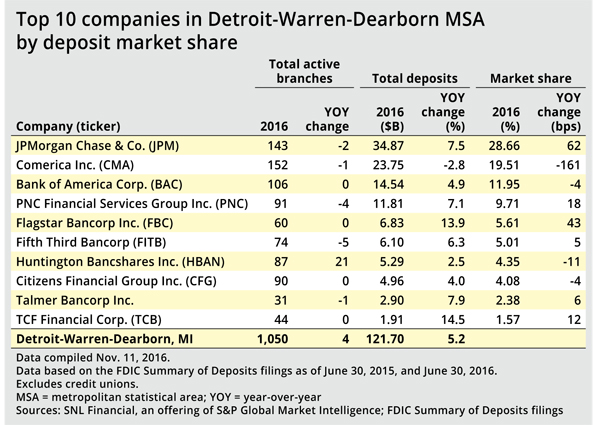