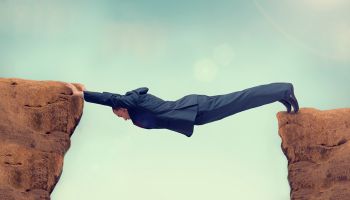 Bank net interest margins could be poised to rebound for a sustained period after facing years of pressure.

Bank margins dipped modestly in the fourth quarter of 2016, but the Street seems hopeful that the key profitability figure is set to hit an inflection point in 2017.

Commercial banks' fully taxable-equivalent net interest margin declined by two basis points to 3.10% in the fourth quarter of 2016 from 3.12% in the linked quarter but rose significantly from the year-ago quarter's 3.06%.

Both short-term and long-term rates have risen considerably in the last 14 months, positioning the banking industry for higher net interest margins in the future.

The Federal Reserve has raised the key fed funds rate twice since December 2015, while long-term rates have risen more than 65 basis points over the same time frame, with much of the increase coming in the aftermath of the U.S. presidential election in early November 2016.

The market expects further short-term rate hikes, with fed futures assigning more than a 50% probability that the U.S. central bank will raise the benchmark rate two or three times in 2017.

[Editor’s update: Since S&P Global filed this article Feb. 21 Federal Reserve Board Chairman Janet Yellen stated in a March 3 speech that a rate increase in March was probable.]

"We expect NIMs to improve further in 2017 as the Federal Reserve makes additional short-term rate hikes and long-term rates hold steady or edge up. The rate environment will buttress US banks' core profitability, since net interest income accounts for a median of above 60% of their total revenue," Moody's wrote in the report. 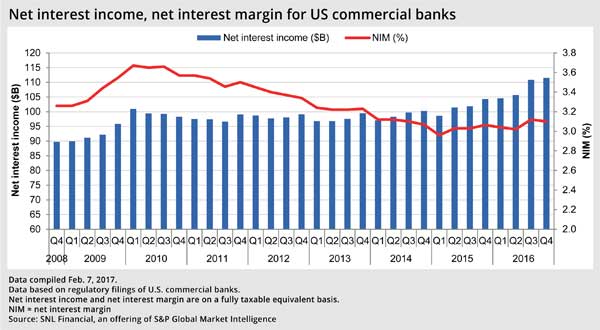 Funding costs, meanwhile, have begun to rise modestly, with the cost of interest-bearing deposits in the banking industry—excluding industrial banks, nondepository trust, cooperative banks and thrift holding companies—increasing three basis points in 2016 to 0.36%. The increase was most pronounced among larger institutions, with the median of cost of interest-bearing deposits at banks with more than $250 billion in assets rising seven basis points to 0.25%.

D.A. Davidson bank analysts noted in a recent report that most banks remain confident in their ability to keep increases in deposit costs at a minimum. The analyst team supported that outlook, noting that the banking system continues to have ample liquidity.

"Several management teams admitted one or two additional hikes might spur competitive activity, but for now, all is relatively calm on deposit repricing," the analysts wrote in a Feb. 8 report.

Bankers' expectations for deposit betas, or just how much of the change in market rates they will have to pass on to customers, varies considerably from bank to bank.

The KBW bank research team has worked to track expectations disclosed by the banking industry and has provided investors with the team's own forecast for deposit betas from the third quarter of 2016 through the fourth quarter of 2018. KBW expects an average beta on interest-bearing deposits of 17% for universal banks, 43% for regional banks and 35% among small-cap and mid-cap banks.

The Raymond James bank analyst team noted that margin expansion coupled with a lower corporate tax rate would actually drive earnings higher than some of the other potential positives for the bank sector that have helped fuel the recent bank stock rally.

While deregulation and the potential for stronger economic growth stemming from fiscal stimulus could offer a tailwind to bank earnings, Raymond James analysts noted that margin expansion and lower taxes are "significantly stronger" drivers of possible increases in earnings estimates going forward. 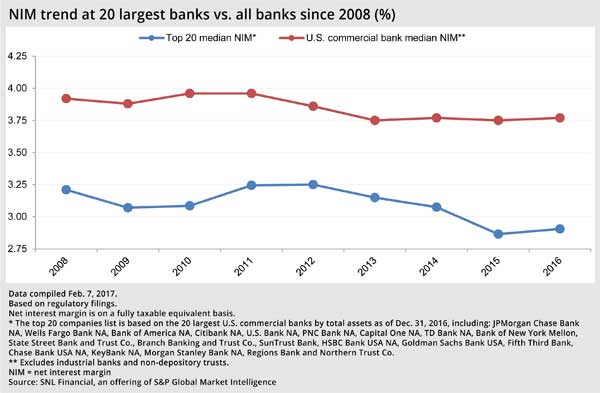 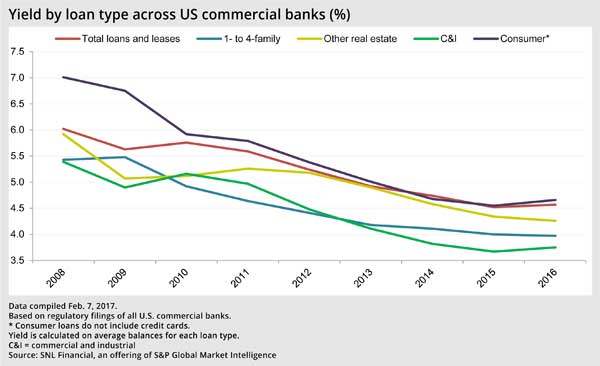