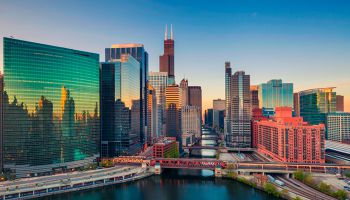 The colossal Chicago banking market consolidated substantially over the past 10 years, particularly among small community lenders. The number of banks and thrifts under $1 billion in assets in the metropolitan area fell from 220 in 2006 to 106 by the end of 2016—driven largely by M&A, according to an S&P Global Market Intelligence analysis.

There were 66 whole-bank deals announced in Greater Chicago over the past 10 years. That compares with 66 in the New York City area and 53 in the Los Angeles metro. But Chicago remains relatively flush with community banks. The New York metro area had 83 banks under $1 billion in assets at the close of 2016; L.A. had 50. Analysts say Chicago has long had more community banks because it is home to many small businesses that historically have preferred borrowing from local lenders.

But now, many of those local banks need more scale, so the Windy City is ripe for further deal activity. With heavy competition and regulatory burdens impacting small banks, dozens of them could potentially sell, analysts say. Larger community and regional lenders also want to increase their size to gain efficiencies and better compete with national banks, which motivates them to shop as buyers.

"The feedback we are getting from the banks is that the long-running motivations for consolidation are still there," Kevin Fitzsimmons, a Hovde Group analyst who covers Chicago banks, said in an interview.

Sandler O'Neill & Partners analyst Brad Milsaps, who also covers the Chicago market, hears the same drumbeat. "In talking with the banks," Milsaps said in an interview, "we are told there is still a lot of conversation going on about M&A."

To be sure, he said, some small banks are likely delaying serious deal talks early this year amid anticipation of positive impacts from higher interest rates, potentially lower taxes, and calls for deregulation.

Federal Reserve policymakers raised their key benchmark interest rate by 25 basis points on March 15—the second such move in three months. Fed officials indicated they could continue to raise rates further in 2017 if economic data is favorable. A higher rate environment likely would make many banks' loans more profitable. If that coincided with lower corporate tax rates and fewer regulations, more small banks would have fewer expenses and better earnings outlooks.

But the benefits of higher rates might take several quarters to show, Milsaps said. Many banks may also be uncertain about the form, timing, and passage of tax reform and deregulation legislation championed by President Donald Trump and leaders in the GOP-controlled Congress, he added. As such, sellers are still likely to emerge this year and perhaps into 2018.

"You still have a lot of smaller banks that will have to ultimately decide what the future holds for them," Milsaps said. 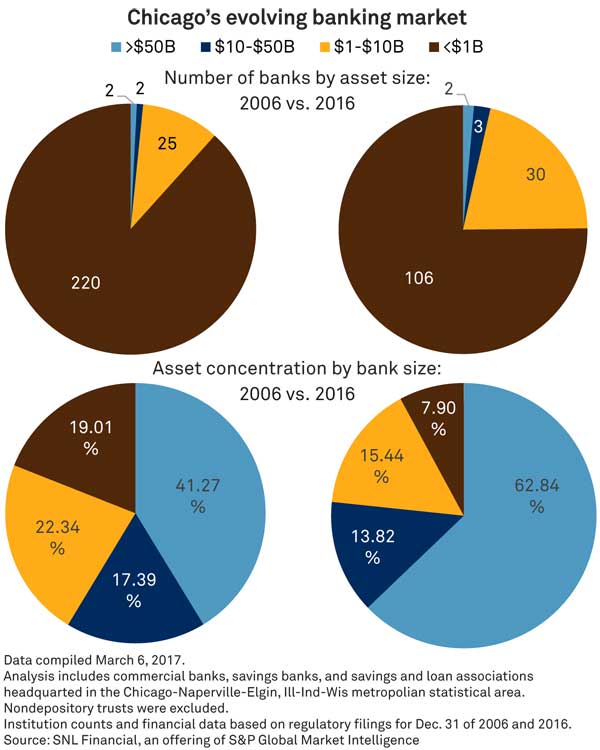 At the same time, after a bank-stock rally since the November 2016 elections, Fitzsimmons said many would-be sellers will probably try to capitalize on buyers' strong currencies and sell out while markets are bullish.

"You do have some competing forces, so I don't know if things accelerate from here," Fitzsimmons noted. "But I also do think we will continue to see consolidation continue at generally a steady pace."

Who will go shopping?

Likely buyers in Greater Chicago are those already active on the M&A front there, analysts say, notably including First Midwest Bancorp Inc. and Wintrust Financial Corp. Both have closed several deals in and near the Chicago area over the past several years, buying community banks and leading the consolidation drive.

Michael Scudder, First Midwest president and CEO, said during the company's recent earnings call that, when it comes to more M&A, "there's really no barriers to the further pursuit of opportunities." And, "as far as the environment for those types of activities, I haven't seen a significant uptick or downtick in terms of just general conversations and discussions that are out there broadly," he said. This suggests that deal activity could continue as it has in recent years. 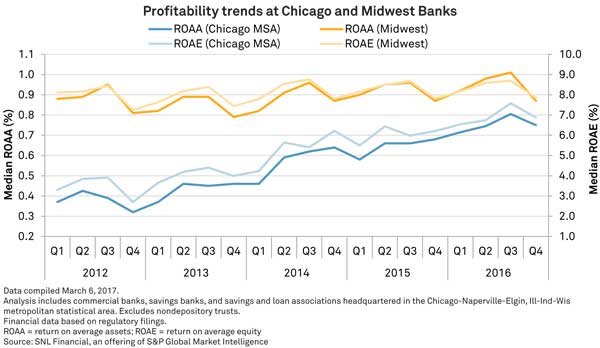 Edward Wehmer, Wintrust president and CEO, offered a similar assessment about his company's earnings call. He said Wintrust "will take what the market gives us" and not "overpay for banks." But, he added, "our acquisition pipelines are active in all lines of business and … we are very excited about our prospects for 2017."

MB Financial Inc., another acquisitive Chicago bank, is also open to M&A possibilities. President and CEO Mitchell Feiger said on a recent earnings call that, following years of consolidation, opportunities could prove fewer in number than previous years simply because there are fewer banks left. But, "we remain interested in acquiring other really good companies," he said.

Sandler O'Neill's Milsaps also said Midwest banks outside of Chicago are likely looking for opportunities in the market, given Chicago's prominence in the region. "It's still the capital of the Midwest, so if you are sitting almost anywhere in the region, getting a slice of Chicago could look good from a growth standpoint," he said.

He also noted that M&A activity could include large regional banks acquiring smaller regionals or big community banks. Though big bank deals have been rare in recent years, there are recent examples of this.

Huntington Bancshares Inc. in 2016 paid about $3.4 billion to acquire Ohio-based FirstMerit Corp., a bank with a significant Chicago presence. And Canadian Imperial Bank of Commerce said last year that it planned to buy Chicago-based PrivateBancorp Inc., which has more than $20 billion in assets, for about $3.8 billion. That deal is projected to close early this year.

"So we are looking for more signs of bigger deals, too," Milsaps said. 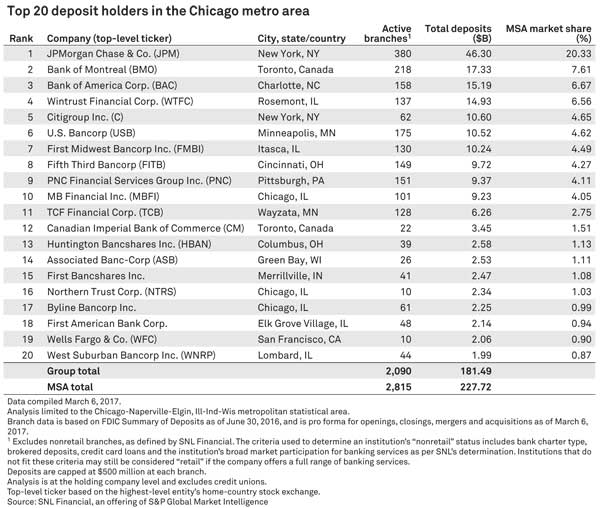