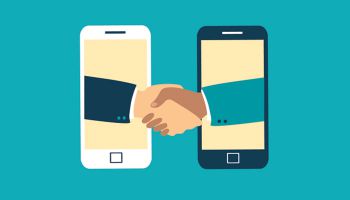 Smart contracts have enormous appeal. But could this blockchain application cut banks out of the loop?

Get ready for the next big disruptive technology in banking—one that threatens to supplant banks’ centuries-old core value as third-party guarantors of commercial contracts.

That emerging technology is known as “smart contracts.” In a nutshell, these employ a self-executing code on a blockchain that automatically implements the terms of an agreement between parties.

“The risk, in a word, is disintermediation,” says Armen Kherlopian, chief science officer for analytics and research at Genpact, in an interview with Banking Exchange. Genpact is a global business process management and services corporation.

Kherlopian is not the only one predicting this risk.

“With smart contracts, retail customers will be able to agree on financing directly with the seller when buying a car or home and forcing banks into the role of the passive onlooker,” claims a recent blog by zeb, a German-based international management consultancy specialized in the financial services industry. The article was written by Axel Sarnitz, partner at zeb, and Robert Maier, a consultant for Digital Financial Services.

As far back as 2015, BBVA Research issued a paper that concludes:

“The main purpose of smart contracts is to enable people to do business with strangers, usually over the internet, without the need for a trusted intermediary. The idea is that software can automate much of the process, allowing the enforcement of contractual promises without human involvement.”

What smart contracts promise, says Kherlopian, is “massively reduced operating costs and increased compliance,” as well as reducing contract disputes. Due to the use of the blockchain protocol, or distributed ledger, all parties in a contract have identical data simultaneously, eliminating the need for third-party clearing services.

Smart contracts have not gained momentum, although use cases continue to be identified in a wide variety of fields. However, says Kherlopian, “it’s very much the early days for the banks.”

In fact, he observes, “banks are particularly gun shy because [smart contracts] go to the heart of what a bank does, being the essential authority for the exchange of value. This core tenet is being assaulted.”

Where would smart contracts arrive first?

The Deloitte CFO Program published a primer about smart contracts late in 2016 in which it examined two potential prime use cases for smart contracts. The factors it considered included a sizable market opportunity; the presence of active and relatively well-funded start-ups targeting the opportunity; the participation of prominent investors; technical feasibility; and ease of implementation.

These two uses are trade clearing and settlement, and supply chain and trade finance.

For the former, says the Deloitte primer, smart contracts offer the ability to automate approval workflows and clearing calculations, which otherwise are prone to lag and error.

For the latter, smart contracts could make documentation more efficient by streamlining processes previously spread across multiple parties and databases.

All about the efficiency

Kherlopian compares the potential disruption to commercial banks with what Uber and Lyft have done to traditional taxi services.

“The reason ride-sharing services became so effective is operational efficiency. You could get a car when you needed it much faster,” he says.

Operational efficiency is what will give smart contracts staying power, he says.

“Smart contracts will likely grow on the back of operational efficiency,” says Kherlopian. “It’s very subtle, but it’s very powerful.”

For example, the triggers in contracts would be done automatically and securely, without the potential of errors and delays caused by paper-based systems, faulty data, or mis-entered information.

What could banks do with this tech?

To be sure, observers have noted ways banks might employ smart contracts on their own.

However, many issues need to be worked out. The Deloitte primer notes that these include scalability; flexibility; privacy; latency (lag time between updates to ledgers); and permissioning (allowing open or restricted access).

One is to step up monitoring of the development of smart contract networks, particularly those that have or will develop in the areas of transfer of physical assets, commercial lending, and supply chain.

Banks should “be aware of how these networks are scaling to be the dominant one,” he says.

The other bit of advice to banks is to compete on the basis of superior service, particularly by providing a bridge between various entities.

“The commercial banks will have to compete on the level of that service, on the level of what does that combined contract/product/supply chain package looks like. It may very well be that you will have marketplaces as part of a blockchain ecosystem. This is yet to be seen, but this very well may be where the industry has to go,” Kherlopian says.