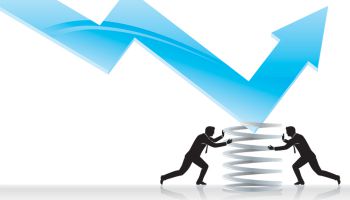 C&I lending increased across each asset threshold for banks with less than $10 billion in assets. Banks in the $1 billion to $10 billion asset class experienced the strongest C&I growth, up by a median of 3.4% from the first quarter of 2017. Regionally, the Northeast experienced the strongest median C&I growth, up 3.0%. The national quarter-over-quarter increase was 1.9%. 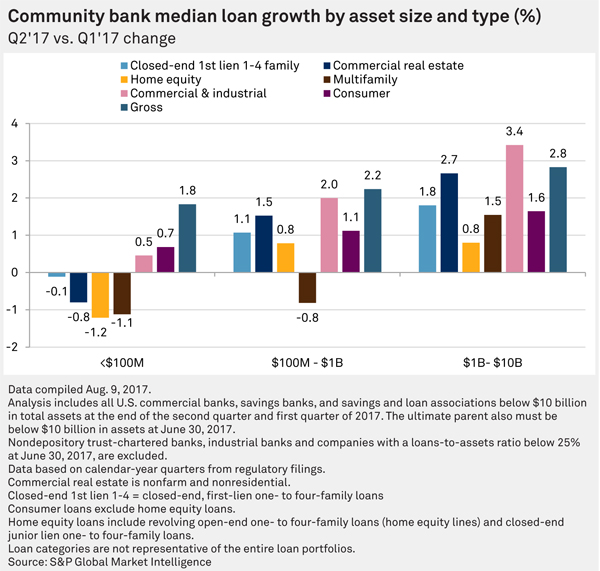 Lending is expected to remain subdued at the nation's largest banks, where the Federal Reserve reported a flattening in C&I activity. But analysts say pipelines remain strong for community banks.

In an interview, Keefe Bruyette & Woods analyst Christopher McGratty said, based on earnings commentary, he expects small-bank loan growth to be in the high single digits in the back half of the year.

"You saw a decent rebound in commercial lending, and that's what most of these banks are trying to do, because of the variability of the interest rate and the asset sensitivity," McGratty said, "and typically, you get some deposits with it."

In a research note, Raymond James analysts also expressed optimism that the surge in C&I lending will accelerate loan growth in the second half of the year, "particularly if Congress can provide some conviction that it can get something done to stimulate the economy."

A slow first quarter was largely attributed to seasonality and uncertainty in Washington. 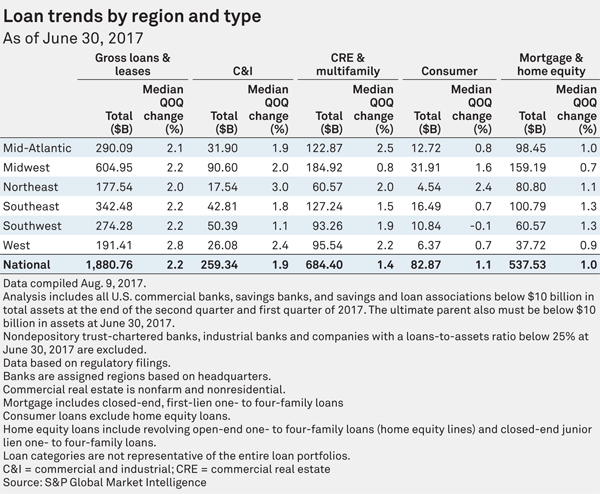 Among other trends, consumer lending rebounded in the second quarter, with the exception of the Southwest, where it experienced a 0.1% median decline.

"In general, the mortgage market did pretty good in the second quarter," McGratty said. "One benefit of the long-term rates coming down is that it spurts mortgage banking. Banks can either sell the production or retain it, and if they retain it, they typically show pretty good one- to four-family loan growth."