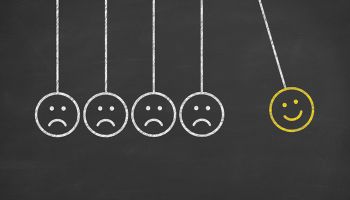 Lending at the nation's largest banks grew compared to a seasonally sluggish first quarter of 2017, but the industry remains subdued on expectations for growth in the coming quarters.

All 10 of the largest banks saw quarter-over-quarter growth in total loans and leases, with stronger performance coming from consumer lending.

But commercial and industrial, or C&I, lending did not appear as strong for the quarter, namely at three of the big four banks: JPMorgan Chase Bank NA, Wells Fargo Bank NA, and Bank of America NA.

In its most recent survey of senior loan officers, the Federal Reserve noted that the flattening activity in C&I is the result of weaker demand in the second quarter, since banks left their standards "basically unchanged."

In residential real estate, the Fed noticed banks slightly easing standards as demand strengthened. Most of the largest banks saw higher mortgage and home equity lending, although Capital One NA saw its portfolio fall 4.5% quarter over quarter as it continues to carry out a planned runoff of its mortgages.

On commercial real estate, or CRE, the Fed saw tighter lending standards as demand weakened. But most of the big banks saw quarter-over-quarter increases in lending, with the exception of Bank of America NA and U.S. Bank NA.

Chris Kotowski, analyst at Oppenheimer & Co. Inc., said in an interview that the big banks have broadly grown more slowly than the industry. S&P Global Market Intelligence data shows that only three of the 10 largest banks grew loans in the second quarter at a higher rate than the U.S. commercial bank aggregate of 1.7%: Wells Fargo, Citibank, and PNC Bank NA.

"We are in a slow, steady state," Kotowski said in an interview. 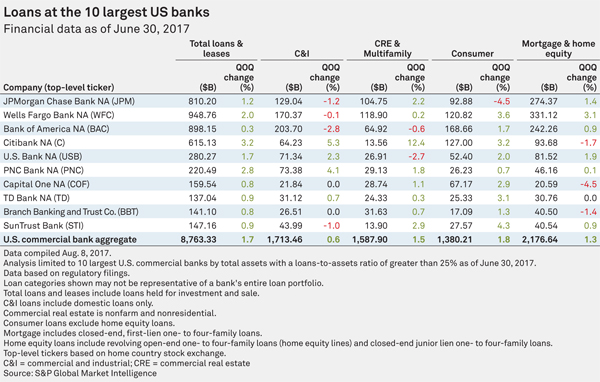 On earnings calls, executives of the largest banks also painted a bleak forecast of loan growth in coming quarters.

At Bank of America Corp., CFO Paul Donofrio said July 18 that the company expects only a "little bit of growth," with total loans expanding at a rate in the low single digits. Wells Fargo & Co. CFO John Shrewsberry said July 14 that his company is also targeting low single-digit loan growth for the year.

SunTrust Banks Inc. Chairman, CEO and President William Rogers Jr. said his company is focused on adapting to pockets of different lending categories where there are growth opportunities.

"If we've been in a cycle and we've been unable to achieve that kind of return, we're totally willing to move on and move to another opportunity where we think we can benefit more substantially," Rogers said.

As executives exuded cautious optimism for future loan growth, analysts appear to be closely watching credit markets. A July 31 Oppenheimer note acknowledges that current year-over-year growth, based on the Federal Reserve's H.8 data, is cause for concern because it is running just under nominal GDP.

"What would really worry us is if banks and borrowers had started pulling in their horns because of signs of credit issues," the note reads.

Jon Winick, president of bank adviser Clark Street Capital, said in an interview that his overall outlook for loan growth is "flat to negative," pointing to weaker C&I lending that can't be overcome with stronger residential mortgage activity. He added that he talked with one corporate lender at a large bank who described current loan pipelines as "dead," presenting some anecdotal evidence that loan growth may not pick up soon.

"In the aggregate it's hard to be optimistic on loan growth," Winick said.