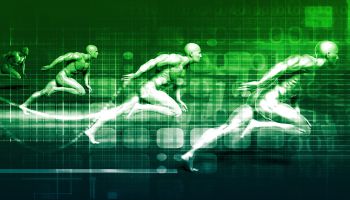 Agility and speed are both pre-requisites for competitive banking today. Finastra’s Michael Dionne discusses what it takes.

About five or six years ago a bank customer of what was then Harland Financial Solutions told the tech vendor, “Our customers want to initiate a mortgage application on their mobile phone.”

“We couldn’t believe it,” said Michael Dionne, who was working then for Harland Financial. HFS was subsequently acquired by D+H and then merged with Misys into newly launched Finastra this June. Dionne is Finastra’s Managing Director, North American Community Markets. But at the time, he recalled in an interview, “We thought, ‘Who in their right mind is going to spend 25 minutes on their phone entering all the data needed for a mortgage?’”

“Well guess what?” says Dionne, “they now do just that. Millennials are not going to sit down at a keyboard. Their phone is an extension of them.”

D+H eventually did develop a mobile application for mortgage loans, and Dionne says that a mobile mortgage app is now a must-have for serving millennials.

Banking Exchange interviewed Dionne during Finastra’s recent North American user conference called “Perspectives.” He brought up the mobile mortgage app as an example of the changes in expectations being driven by the large millennial cohort.

Keeping up with Tier 1’s

These seismic shifts—driven by rapid advances in digital technology, and generational change—put enormous pressure on community banks in particular. One community banker described the ongoing transformation as a “technology arms race.”

Dionne believes most banks are aware that they could be marginalized by the big tier 1 banks—JP Morgan Chase, Bank of America, and Wells Fargo.

“Most community bankers realize that they have to have the intestinal fortitude to invest in this new technology or they will become irrelevant,” he says. “They know they have to stay within striking distance of the capabilities of the big guys. Especially when you’re talking about millennial customers. You’re never going to get a millennial to go into the branch and make a deposit or open a new account.”

There are some who dispute the point, but the disagreement is usually at the margin. Hardly anyone is saying that new digital technology doesn’t matter.

The “technology arms race” also puts pressure on bank technology providers. They, too, must keep up with the elevated pace and expanded scope of change—the mobile mortgage app being one example—while still supporting the wide range of existing platforms and applications used by their bank, thrift, credit union customers—and while passing muster with examiners.

In the interview, Dionne talked about the status of bank core processing, how community banks can compete, and the impact of marketplace lenders.

At Finastra’s user conference Dionne and other members of the leadership team said that the company’s greatly increased size (combined revenues of $2.1 billion) and the cross-pollination between Misys and D+H capabilities and markets will be a plus for their customers.

The two companies serve largely different markets geographically and by asset size. Whereas Misys is heavily focused on large financial institutions in Europe, the Middle East, and Asia, with core system, capital markets, and treasury software applications, the vast majority of D+H customers are in the U.S. and Canada. By number, community institutions predominate although large U.S. banks also use D+H’s lending products, including Mortgagebot and LaserPro.

Dionne said in the interview that simply taking something off the Misys shelf and plugging into the community bank market won’t happen immediately. He did add, however, that “Misys has a digital platform—for internet and mobile banking—that we’re looking really hard at [for the U.S. community bank market].” The product was developed by a company Misys acquired, says Dionne, and has some unique features, including facial recognition.

(Finastra CEO Nadeem Syed mentioned during his Perspectives presentation that a digital-only bank in Malta was currently using this facial recognition product as part of a digital account opening process.)

Dionne says he wouldn’t be surprised if that digital platform could be “localized” for the community bank market in the next 12 months.

Misys offers core system software, will that migrate to the U.S. market? Dionne defers to his colleague Spencer Jones, Global Head Retail Banking at Finastra, on that point. Dionne did observe, however, that “efforts to bring new core systems to the U.S. market have been really tough. A lot of people—including some high-profile companies—have tried and virtually everybody has failed. The regulatory environment in the U.S. is just a bear.”

Dionne adds that there are a lot of places to add value besides the core. “If you look at these disruptors,” he says, referring to some of the fintech startups, “they’re looking for more efficiencies in commercial lending, consumer lending, small business lending, or a more efficient means of gathering deposits. Those are probably shorter paths to victory than trying to build a core system from scratch.”

Finastra wouldn’t seem to need additional core systems. Apart from the Misys FusionBanking Equation system, the company has four other core systems that were part of the D+H offerings: PhoenixEFE, UltraData Enterprise, Intrieve, and Sparak Systems.

Dionne clarified the company’s strategy for current U.S. systems during the interview:

“Phoenix and UltraData are absolutely go-forward strategies. We’ll continue to evolve those. With Intrieve and Sparak I don’t think we’ll be developing new core capabilities, but we have no intention of sunsetting them.”

He explained that Fusionfabric—the open connectivity approach developed by Misys that allows banks to add new products on top of existing systems without the need to hard code proprietary system interfaces—works with any of the Finastra core systems.

In addition, with the Phoenix system in particular, Dionne said it shouldn’t be difficult for the company to develop the required “layer” that allows bankers to make best-of-breed application choices and plug them into the Phoenix core if they want.

Ways community banks can keep up

Dionne believes there is a path for community banks to keep pace in the “tech arms race.”

“They won’t be able to wildly differentiate themselves from a technology capability viewpoint, necessarily,” says Dionne, “but they will be competitive.” And close to what the tier 1 banks can do, he adds.

The thing that will continue to differentiate the community bank, Dionne explains, is the same thing that’s always differentiated them—the ability to have the personal touch. That part is up to them, but the electronic collaboration between bank and customer, he says, is where a vendor can help.

“We can play a role in leveling the playing field for the community bank because we can build a solution once and can sell it across 6,000-plus customers. We’ve got 4,500 people focused on product and product development that allows us to provide product that’s similar to what a J.P. Morgan, a Wells Fargo, or a BofA can provide.”

Addressing that, Finastra’s Dionne says, “Some of our competitors will talk about ‘openness.’ But at the end of the day that openness is, ‘If you buy my quarter–million-dollar API, I’ll allow you to plug in whatever third-party digital banking solution you would like.’ The path that we’re looking to take is a little bit more intellectually honest in that regard. We recognize we may not be able to be best of breed in all things and in order for you to compete as a bank maybe you make a determination that we don’t bring the best offering.

“One of our near-term objectives is to provide an infrastructure that allows even a community bank to take a third-party, non-Finastra solution and integrate it into the core. That is consistent with the idea behind Fusionfabric.”

We asked Dionne, who oversees Finastra’s popular loan documentation software LaserPro, what his perspective is on the impact of marketplace lenders on the bank lending market.

The first thing he pointed out was that several of the marketplace lenders—OnDeck being one example—have had to adjust their business model in response to the vagaries of the investor marketplace—their primary source of funds to lend. OnDeck, specifically, has now partnered with JP Morgan Chase.

Nevertheless, Dionne is quick to add that he is not dismissing marketplace lenders as a competitive factor.

“There are many things they’ve done well that, frankly, has caused banks to raise their game.” Marketplace lenders made their mark by providing a better and much faster user experience, he says.

“If I’m a small business,” Dionne continues, “I don’t want to wait six days for a loan decision. Typically with a small business or a consumer there’s a cash flow crunch that they’re looking to address. Waiting for a bank to go through its typical underwriting and funding processes doesn’t cut it. So that’s why I think marketplace lenders had as much success as they did until their capital became unreliable.

Creating a better and faster user experience is an area vendors can help with, Dionne believes.

“Something we can do well is help banks streamline [lending] processes,” he says. In terms of user experience, Dionne notes that the bar has been set by the big technology companies—Amazon, Microsoft, Apple. They have basically defined what that experience needs to be in terms of ease of use and speed.

Asked if Finastra’s lending products help banks be as quick as the fintech lenders, Dionne replied: “With mortgage lending that is absolutely the case. I think we’re getting there quickly on the consumer side.”

He observes, however, that some of the equation has to do with a bank’s appetite for risk. We’ve got the ability with our systems in the small business and consumer space to auto-decision a loan. But there are some financial institutions that aren’t comfortable with that. They still want to look at a piece of paper. So it’s not always that the technology can’t do it. Sometimes it’s a reflection of the risk appetite of the bank.”