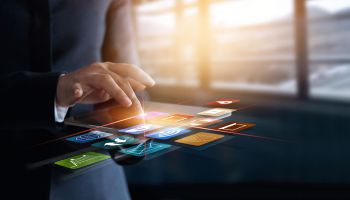 Convenience and speed are two things we love about new technology. But there are risks that must be balanced in new tech as well, says Jerome Powell of the Federal Reserve Board.

The pace and nature of retail financial services innovation have underscored the need for a balance between consumers’ desire for speed and convenience and the need to protect their privacy and to ensure the security and safety of their data.

Powell noted that fintech digital lending platforms has streamlined many aspects of personal and small-business lending. Not only do these platforms speed the application process, he said, but they also evaluation and monitoring of relevant data from outside of the traditional credit data pool. Being able to pull in shipping information for a company—or even its customer reviews from online sites—would be fresh information for lenders.

“With this additional information, the bank would have a more complete picture of an applicant’s day-to-day activity and overall financial capacity,” said Powell, “and potentially a greater ability to provide credit to customers, including some who might have been otherwise denied a loan based on traditional data.”

But data is at the heart of the innovation evolution in multiple ways.

Powell pointed out that fintech firms sometimes obtain their customers’ banking data without entering into any arrangement with the bank. This has become an issue of debate in federal circles, i.e., whose data is it? In Europe and the U.K., for instance, government has answered “the customer’s.”

Instead of having an agreement with banks, fintech firms and other services to consumers obtain login information from the bank’s customers. This allows them to “screen scrape” information from financial accounts. This in turn goes into software offered by the third party for providing inter-company financial dashboards and other aggregation services.

“Policymakers and the financial industry must assure that enhanced convenience and speed in financial services do not undermine the safety, security, and reliability of those services,” said Powell.

Powell spoke of the movement toward “instant” payments made possible by mobile devices. This effort began with nonbank apps, followed by banking industry apps designed to move money among customers’ deposit accounts.

“And we are already moving to a world in which we need not open a special app or go to our bank’s website in order to send money,” said Powell. Any number of apps—Powell specifically mentioned Uber and Lyft and social media messaging services—already permit users to make payments inside the app.

Apps can also serve as a means of improving security on other platforms, by providing additional means of verifying identity. Powell listed multiple means, including: two-factor authentication codes sent via text message; biometrics, such as fingerprint or face scans; and geolocation data.

“Consumers will not store their funds in a system that is not secure and will not want to transfer funds out of an otherwise secure system if the process is cumbersome,” Powell noted.

Yet to date, beneath it all, money still moves on banking industry rails.

Banks are still key to making payments happen, said Powell. “Even where this reality is obscured by several layers of technology,” said Powell, “there is almost always a bank involved in consumer transactions.”

The combination of faster computer processes and cloud-based accessibility has improved the detection of spending patterns that fail to match consumers’ typical behavior, Powell said. This can increase security. He said later in his speech that in 2018 the Fed will launch a study of payment system vulnerabilities. He said the Fed would also set up work groups targeting such vulnerabilities, following up on work by the Fed-sponsored Secure Payments Task Force.

Powell commented on the ongoing effort to build a faster-payments system in the U.S. He emphasized the need for new approaches to bring along the best of the old.

“When we pay with cash or write a check” said Powell, “we don’t spend a lot of time worrying about who our recipient banks with; that universality seems an appropriate standard for new payment options as well.”

As the nation moves further away from traditional approaches, the mix of what the Federal Reserve performs in payments will also change in specifics. Powell said that the Fed “is considering providing settlement services—a traditional core function of a central bank—to address the future needs of a ubiquitous real-time retail payments environment.”