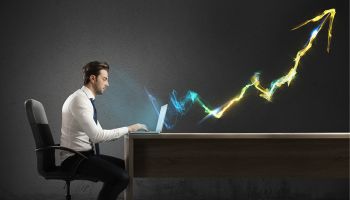 "Lightning fast" is just the beginning of what today's consumers expect out of financial services.

For some time, the modern marketing gimmick has been “razor handles.” That is, you just about give away the mechanism—a razor handle, a computer printer, and more—in order to create an annuity of sales for the supply. Such as razor or printer cartridges.

That hasn’t gone away. But a much newer wrinkle is the subscription sale—such as Dollar Shave Club or Harry’s—where every month your choice of blades and potions arrives without your having to think about it.

That’s just the beginning. You know how Pandora turns your thumbs up/thumbs down ratings into a customized music playlist? Now imagine a clothes shopping service that offers new threads on approval. Don’t like everything? Or anything? Send it back, no shipping charge. That’s Stitch Fix. Another service tests your eyes online, offers you an online selection of frames, and ships new glasses.

This is not a glimpse of the future. It’s all here.

“At American Express we’ve been referring to this trend as ‘globile’,” said Denise Pickett, president, U.S. Consumer Products & Services, during a general session at this fall’s Money 20/20 Conference. “That’s ‘global mobile services delivered seamlessly.’ And it is rapidly changing the service game in many ways.”

Continuing, Pickett said that “when even the friction of walking into a store to buy glasses or picking out your clothes is removed, what do consumers come to expect with regards to their money?”

Meet me where I am…

Added Pickett, a 25-year financial services veteran: “And what are we going to do about the inflation of expectations?”

Here’s the challenge, she said. Card members “are living their lives in one continuous experience. They no longer think in terms of specific industries like finance, hospitality, or healthcare. They are going to judge every interaction with a brand against the last delightful and frictionless experience that they had, regardless of which company delivered it.”

A key step is to bring financial services to where the customer is. Increasingly, customers expect that. So, for example, American Express has developed a service for Amazon’s Alexa that can answer many types of account questions. Amex can also be reached from within Facebook Messenger. Beyond that, the company is piloting an app called Ask Amex, a mobile concierge powered by Amex for assistance in making travel, entertainment, and restaurant reservations.

But frictionless means more than easy access to Pickett. She says companies must find out what customers really want. And in bill payment, a financial services basic, “we learned that they want a deeper level of control.”

From this came the company’s recently introduced “Pay It Plan It” service. Holders of certain American Express credit cards can choose how and when they pay certain charges, ranging from instantly, through linked debit cards that tap their banks accounts to a choice of installment plans for larger purchases. [Read “Amex offers credit card users new ways to pay”]

“Everyone who has planned a wedding or bought a house knows that every month is not created the same,” said Pickett. “And it’s hard to keep track of what you’re spending.” This inspired the new service, introduced in late summer.

Beyond product design, Pickett said the way to interpret a move like this is a matter of who calls the shots.

“It’s about relinquishing a little bit of control,” she explained. “Letting our customers lead in determining when, where, and how they want to interact.”

The common denominator is thinking outside of the financial company’s own environment, and thinking of what the customer wants to accomplish.

This is the trend behind much of what is going on among consumers now. “Companies like Spotify, Netflix, Uber, and Airbnb are teaching consumers to treat products like services,” Pickett explained. “Our children are going to look back and think we were crazy for purchasing our entertainment in incremental units like TV shows and albums.”

The umbrella term for this trend, she noted, is “servitization.”

While “servitization” and “globile” might imply that people crave more relations with bots and such, Pickett sees this as going further than consumers want.

“Humanizing technology is super important,” she explained. “That’s because when it comes to significant life issues like health and someone’s finances there is a certain point where we expect and want to deal with a human. Even for the basic interactions, we want it to feel as human as possible—even when we know we’re engaging with artificial intelligence.”

Pickett says AI must complement, and not replace, the frontline customer service representative. AI should free up humans to deliver higher quality experiences to more people, rather than forcing all dealings into an electronic channel.

Pickett—who noted that she is a mother of three—gave a real-world example of what she means.

Part of her job is listening to call center employees handling customer requests. She told of a recent call:

“A man spent over 50 minutes on the phone with an Amex representative, making a dinner reservation, and he wanted to make sure the restaurant knew that his wife was pregnant. He must have used the word ‘pregnant’ over ten times during the call.

“I realized two things. First, this was clearly his first child—by the time you get to the second child you’re not thinking about this. Second, here was a young man needing to tell people his wife was pregnant, to know that she’d be taken care of. And we were there to listen.”

Picket said she gets the need to adopt more AI and all the other new technologies. But she added, “the reality is that the need for a human element has become more, not less important.”